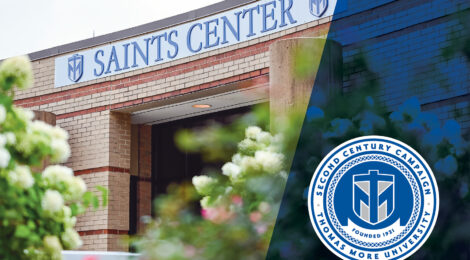 Submitted by Lyna Kelley, Director of Communications and PR

Alumni and community members stepped up in a big way to support this comprehensive capital campaign which funds the initiatives set forth in the 2021-2026 Strategic Plan – Lighting the Way. Success of the campaign ensures the University will reach its goal to expand its footprint and continue to impact the region as the premier Catholic university. “The support we are seeing for our Second Century Campaign is nothing short of extraordinary,” says President Joe Chillo. “Alumni and friends want to pay it forward and see future students benefit from a high-quality, Catholic liberal arts education. They know with certainty that current and future graduates of Thomas More will emerge as civic leaders and responsible stewards, well-equipped to affect positive change in the community. Surpassing the halfway mark of a five-year capital campaign goal, just a few months after its launch, testifies to the faith that our community has in the ability of Thomas More to provide students with an innovative and transformative educational experience.”

The public phase of the campaign was launched in fall of 2021, as a part of the Centennial Celebration of the University, and set benchmarks that position the effort as the most ambitious fundraising campaign in the University’s history. This campaign supports goals with a focus on accelerating campus investments, solidifying new financial partnerships, and initiating innovative   academic opportunities.

Republic Bank has been the official bank of Thomas More University since 2016. The bank also sponsors the University’s Institute for Career Development and Graduate School Planning, a signature program within the Thomas More Success Center. “As we have launched the most ambitious fundraising campaign in University history, it is an incredible feeling to know that we have such strong philanthropic support from one of our most trusted partners in Republic Bank,” says Vice President for Institutional Advancement Kevin Reynolds, Ed.D. (CLICK HERE for the press release.)

Thomas More University also recognized VonLehman CPA and Advisory Firm, one of the largest private CPA and advisory firms in the region, by extending a Saints Salute in January 2022 to honor their incredible work in the community and years of association with the University. The Saints Salute is a community outreach award honoring partner organizations making a difference through continued support of the University and the region. “VonLehman is indebted to the local community that has supported us for over 75 years,” says VonLehman President Adam Davey ’97, CPA. “We are fortunate to have tremendous partners, like Thomas More University, who are true stewards of the community and who make Northern Kentucky such a special place to live and grow.”(CLICK HERE to read the press release.)

In addition to the more than 100 endowed scholarships at Thomas More, a gift to the University established The Wilbert L. and Ellen Hackman Ziegler Chair of the Philosophy Department, the first endowed chair in University history.

The donation was made by the Zieglers in appreciation for the transformative educational experience they received during their years as students and ensures that future students have the same life-changing opportunities. Ellen Hackman Ziegler ’70 majored in English and went on to serve the community as a clinical psychologist. Wilbert Ziegler ’53, J.D., was a first-generation college student when he started at VMC at just 15 years old, majoring in philosophy and history/political science. He went on to become a prominent lawyer in the region and is a founding member of Ziegler & Schneider, P.S.C. Giving back to the philosophy department is a way to celebrate the faculty that made a lasting impact in both their lives. While the Zieglers recognize that “there are many challenges for Catholic education,” Will praised the University for how it “has maintained its mission as it has grown and matured.” (CLICK HERE to read the press release.)

“The support we are seeing for the Second Century Campaign is nothing short of extraordinary. Alumni and friends want to pay it forward and see future students benefit from a high-quality, Catholic liberal arts education.” – President Joe Chillo

The endowed chair brings innovation through supporting excellence in the philosophy department, securing the highest quality faculty. “The Wilbert L. and Ellen Hackman Ziegler Chair helps us to realize our Strategic Plan by ensuring that our students continue to engage in philosophy as a foundation for their liberal arts education and that every student has the opportunity to explore the ultimate meaning of life and their responsibility toward others,” says President Chillo. “This is just one example of how contributions to the Second Century Campaign are already making a major impact for our students.”

Judith A. Marlowe ’69, Ph.D., chairperson of the Board of Trustees, established two endowed scholarships to support Thomas More students: The Judith Marlowe Leadership & Service Award, and Evelyn’s Opportunity Scholarship, in honor of her mother. She is an accomplished audiologist and president of Newborn Hearing Programs & Communications. Her research in audiology focuses on screening all newborns as a model for social change in hearing health care. Among her many notable accomplishments is creating the first newborn hearing screening program in the world, to routinely test every baby for potential hearing issues.

Sr. M. Irmina Saelinger, OSB, Ph.D., was the long-time registrar for Villa Madonna and Thomas More College (1928-1967). She was instrumental in the continued education of students, many of whom deemed her their “guardian angel.” She also wrote “Retrospect and Vista, The First Fifty Years of Thomas More College formerly Villa Madonna College,” which chronicles the University’s first 50 years of history. Sr. Irmina’s family has been very generous to the University, establishing the William H. and Marcella C. Saelinger Presidential Scholarship which has benefited 65 students to date. A recent gift from the family of Sr. Irmina, will result in the renaming of the registrar’s office in her honor. An honor truly deserved by this extraordinary lady.

Another leadership gift aspires to establish the Dr. Anthony ’65 & Geraldine ’66 Zembrodt Center for Leadership, Entrepreneurship, & Innovation. When finalized, the Center will provide incubator space for students, faculty, and staff to explore and test ideas before advancing them as initiatives. Staff and faculty at the Center will assist students as they advance these new business ideas from concept to implementation. Teaming up with local nonprofit Square1 for the Center’s first partnership, Thomas More plans to provide scholarships to trailblazing entrepreneurial students in the region, including a first-place, full-tuition scholarship, a second-place $25,000 scholarship, and a third-place $22,000 scholarship.

“This partnership with Thomas More delivers a significant tool to empower our students to take the life-changing step of higher education. We are thrilled that Thomas More … has invested wholeheartedly in the success of our young innovators.” – Keith Schneider, Square1 President

“These scholarships and our partnership with Square1 will help young, and now proven, student entrepreneurs matriculate into Thomas More University, getting them involved with the Center for Leadership, Entrepreneurship, and Innovation,” says President Chillo. “The University is quickly becoming the innovation destination for young entrepreneurs looking for resources to develop their ideas in an academic environment.”

“This partnership with Thomas More delivers a significant tool to empower our students to take the life-changing step of higher education,” says Keith Schneider, Square1 President. “We are thrilled that Thomas More not only believes in our cause but has invested wholeheartedly in the success of our young innovators.” (CLICK HERE to read the original release.)

The University is expanding its geographical footprint just as ground is broken for the new academic center. This 34,000-square foot building will house advanced technology and improved classroom environments, a 375-seat auditorium, a technology and prototype lab, the Dr. Anthony ’65 & Geraldine ’66 Zembrodt Center for Leadership, Entrepreneurship & Innovation, the Center for Faith, Mission, and Catholic Education, and the College of Business. Construction is scheduled to start this summer. (CLICK HERE to read the press release.)

The University also acquired 207 and 209 Thomas More Parkway, the former DBL Law buildings, across the street from the main campus. The buildings have been renamed Covington Hall (207) and Centennial Hall (209). Various offices are in the process of relocating to these buildings. The movement of departments out of the Saints Center will alow that building to revert back to a student center, its original purpose. with enhanced spaces for activities. A task force is in place to research how best to renovate the space to benefit student groups. Renovations are expected to begin as early as summer 2022. (CLICK HERE to read the original release.)

Thomas More athletics moved forward in February 2022 with an official application to join NCAA Division II. It has been a year of victories for the athletics program as 330 student-athletes were named to the Athletic Directors Honor Roll for their GPA achievements in fall 2021; the women’s and men’s basketball teams were ranked nationally in the top 5 in the NAIA Top-25 Coaches Poll simultaneously for the first time in Saints’ history, with the women closing out their season as the NAIA National Champions; the men’s rugby team brought home the NRCA Division II National Championship title in December 2021; wrestling sent five team members to Nationals; indoor track & field also sent a representative to Nationals; and the dance team, established in 2016, secured a top-ten finish in the NAIA Competitive Dance National Championship.

Plans for the Second Century Campaign include funding for enhanced athletic facilities for many of the Saints’ 29 sports teams. A unique opportunity presented itself in late 2021, which prompted an announcement in early March that the University and the Florence Y’alls Baseball Club would enter a partnership resulting in renaming the home of the Florence Y’alls to “Thomas More Stadium.” As part of the agreement, the stadium also becomes home to the Thomas More Saints baseball team starting in spring 2023. “We are pleased to welcome Thomas More into our sports family,” says Y’alls President David DelBello. “… The agreement partners the Y’alls with a first-class institution and represents a great opportunity for the Saints’ student-athletes to play at our top-notch facility.” Athletic Director Terry Connor adds, “When the opportunity to partner with the Florence Y’alls presented itself, we could not pass it up. To give the baseball team the chance to play in a professional stadium is a great opportunity for our student-athletes and coaches.”

In addition to being home to the baseball team, internships for students will be open within the Florence Y’alls Baseball Club, plus alumni events will be hosted at the facility as early as this summer. This five-year partnership promises to be extremely beneficial for both parties involved. “The student-athlete experience is a big part of Thomas More University,” says President Chillo. “The experience that we create for our student-athletes is intentional and designed for success in the classroom and on the field of competition.” (CLICK HERE to read the press release.)

The abundance of significant gifts and opportunities demonstrates just how blessed Thomas More is with an outstanding network of alumni, friends, and partners that want to see the University succeed. We are thankful that so many are willing to invest in making the higher educational experience for Thomas More students an opportunity to Make It More.