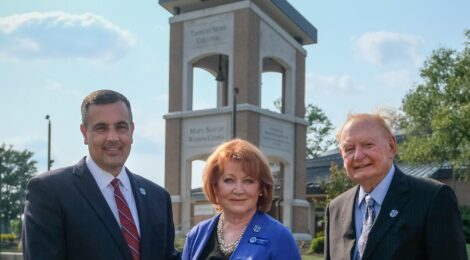 The donation is made by the Ziegler’s in appreciation for the transformative educational experience they received during their years as students at Villa Madonna College (VMC), now Thomas More University, ensuring that future students of Thomas More have the same life-changing opportunities. Ellen Hackman Ziegler ’70, was an English major during her time at VMC. She later went on to serve the community as a clinical psychologist. Wilbert Ziegler ’53, J.D., was a first-generation college student when he started at VMC at just 15-years-old, majoring in philosophy and history/political science. Giving back to the philosophy department is a way to celebrate the faculty that made a lasting impact on his life. Philosophy professors, “prepared me well for law school,” says Ziegler. “Sister Mary Camilla, Ph.D., CDP, was my philosophy teacher. And I recall Sister Mary Rosina Ph.D., CDP.” Ziegler fondly recalled these relationships when reconnecting with the University in 2015 as a member of the Board of Trustees. He also now serves as Honorary Chair of the Thomas More Second Century Campaign. While Ziegler recognizes that “there are many challenges for Catholic education,” he praises the University for how it “has maintained its mission as it has grown and matured.”

The Wilbert L. and Ellen Hackman Ziegler Chair brings innovation to the University through supporting excellence in the philosophy department, ensuring the highest quality faculty. A faculty member earns this honor through his or her demonstrated skills as an educator and scholar, using these assets to mentor fellow and future faculty within the department, promoting Thomas More University’s core values of student success and academic innovation. This position is currently held by Reverend Monsignor Gerald E. Twaddell, D.Phil.

“The Wilbert L. and Ellen Hackman Ziegler Chair helps us to realize our strategic plan by ensuring that our students continue to engage philosophy as a foundation to their liberal arts education and that every student has the opportunity to explore the ultimate meaning of life and their responsibility toward others,” says Thomas More University President Joseph L. Chillo, LP.D. “This is just one example of how contributions to the Second Century Campaign are already making a major impact for our students. It is incredible to see our community coming together to recognize Thomas More as the region’s premier Catholic University.”

The endowed chair was made possible through a leadership contribution by the Ziegler’s during the silent phase of Thomas More University’s Second Century capital campaign, prior to its public launch in fall of 2021. Through previous endowments, Ziegler has created three scholarship funds to support Thomas More students: the Wilbert L. and Ellen Hackman Ziegler Scholarship Fund is a newly created opportunity for pre-law students, the Wilbert L. and Anna M. Ziegler Scholarship Fund, in memory of his parents, has helped over 100 students in the decades since its creation, and the Wilbert & Helen Ziegler Scholarship Fund, created with Ziegler’s late wife, is a partnership with the College of Law at the University of Cincinnati intended to encourage Thomas More graduates to attend the College of Law.