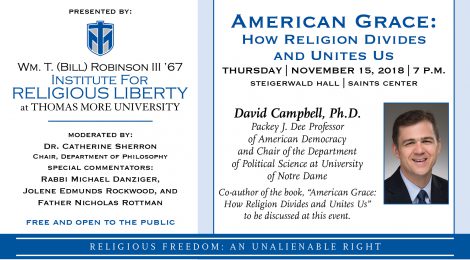 “Religious Tolerance in our Secular Age,” one of six events held by the IRL since its founding in 2015, will take place on Thomas More’s Crestview Hills campus in the Saints Center. The event is free and open to the public.

Campbell, the keynote speaker for the event, is the Packey J. Dee Professor of American democracy and chair of political science at the University of Notre Dame. He is also co-author of an acclaimed book about religion in America called “American Grace: How Religion Divides and Unites Us.” Drawing praise from reviewers across the nation, his work directly focuses on American culture in the present day.

Campbell determined that in the 1950s roughly 95 to 97 percent of the population responded with a specific denomination or with a religious tradition when asked about religious preference. In the 1960s, this number increased nationally from three to five percent to seven percent, and it remained virtually unchanged until the early 1990s. Since then, the number of individuals responding as having no religious affiliation has increased dramatically. Campbell will discuss this steep increase.

“Thomas More University is honored in our second annual fall Interfaith Dialogue to host David Campbell, Ph.D. as the keynote speaker with our theme of “Religious Tolerance in our Secular Age,” said Raymond Hebert, Ph.D., IRL executive director. “Our goal is to encourage civil dialogue at a time where incivility is more prevalent. Campbell’s book focuses on what has changed in American religion during the past 50 to 60 years and, in particular, its impact on the youth. While past tensions were between religions, today, particularly among the youth, they are between the religious and the irreligious.”

Along with Campbell, three commentators, Fr. Nicolas Rottman, Rabbi Michael Danziger, and Jolene Edmunds Rockwood, representing the Catholic, Jewish, and Mormon faiths, will discuss what is being done to encourage youth to remain faithful to their respective religious upbringings.

The William T. Robinson III Institute for Religious Liberty (IRL)serves to advance the American concept of religious freedom as an unalienable right and the protection of this right for all people. It was established in 2015 after several local business and educational leaders, including representatives from Hebrew Union College, discussed the need to celebrate and educate others about the constitutional privilege and right to freely worship and practice religion.