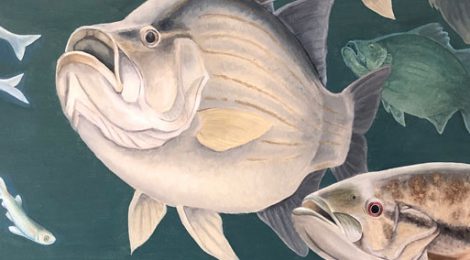 A Day in the Life of the Lab Crew

Each spring the TMU Biology Field Station recruits interns from across the country to work during the summer months in four different groups: the lab crew, river crew, stream team, and environmental educators. Throughout their time at the Field Station, the interns are given the opportunity to gain independent research experience. The interns have access to state-of-the-art water chemistry, wet laboratories, and field equipment. This summer, the labs are attended to every day by the Field Station’s lab crew which includes interns Maisie Merz, James Russell, and Jessi Urichich.

To keep the laboratories functioning properly, the lab crew performs daily tasks such as feeding all animals on site and scraping algae off of the tanks. These tasks are not only important for the health of the animals, but they also teach valuable lab management and animal care skills. Water chemistry and siphoning are done on one tank per day. Water chemistry is essential in keeping tanks healthy and is done using a YSI probe and taking water samples. The YSI probe measures the temperature, pH level, dissolved oxygen, and conductivity of the water in the tanks. The ammonia levels, sulfide levels, hardness, and alkalinity are also tested using a spectrophotometer.

Fathead Minnows– are considered the “white mice” of the fish world; being used for many experiments. This summer, the lab crew is studying with different ratios of male and female minnows to see which ratio produces the most eggs. It is important to find the quickest, most efficient way to breed the minnows since they are used in abundance for different research projects.

The TMU Biology Field Station is a center for freshwater mussel conservation. The Ohio River was originally home to 127 different species of mussels. Of the original 127 species, 42 are now extinct. There is an estimated 85 species living in the River today with two thirds either endangered or threatened. In an effort to restore mussel populations, the Field Station receives mussels to care for from organizations such as the Ohio State University and Kentucky Department of Fish and Wildlife. Mussels have a somewhat complex life cycle. Every mussel has a lure; a modified mantle that is unique to them. This lure is used to attract fish. In order to reproduce, the mussels need to “infect” a host fish’s gills with their glochidia (larvae). These fertilized eggs remain on the host fish and eventually fall off and become juvenile mussels. Each species has a host fish that is specific to them. Fish host experiments have been done at the Field Station to try and determine what fish species host which mussels.

Maisie siphoning one of the fathead minnow breeding tanks.

Maisie Merz came all the way from Hamilton College in Central New York, to intern at the Field Station. Maisie will be a junior in the fall and plans to major in biology with a minor in French. Maisie runs cross country and track at Hamilton College. She is also in the Outdoor Club, Career Center, and is an orientation leader. She hopes to be a conservation biologist or work in environmental justice. Maise states, “This internship is preparing me for the future by teaching me how to run a lab and how to get along with others.” Maisie is performing independent research with the fathead minnows which consists of running toxicity tests on the fish in the hope of seeing how microplastics affect them.

James Russell is an upcoming junior at TMU. James majors in biology and is on the marine biology track. He is involved in many activities at Thomas More such as the Marine Biology Club, Tri-Beta Honors, Biology Club, and many others. James states, “During my time at the Field Station, I have been exposed to research which helps build my resume. The skills I have learned here will help with my future as either a marine biologist or zoologist”. The Field Station internship offers various field trips and networking opportunities. When asked what his most exotic experience has been so far, James replied, “Visiting the Environmental Protection Agency.” This summer, James learned useful lab skills and also has established great connections. James expressed, “Being at the Field Station has helped me become more confident in myself when it comes to socializing.”

Jessi feeding the beloved Waffles, a red eared slider turtle who lives at the Field Station.

Jessi Urichich is a junior at Thomas More University. She majors in environmental science and minors in both Spanish and biology. Jessi is involved with the Blue & Green Club, the Biology Club, and Tri-Beta Honors. This is Jessi’s second summer at the Field Station. Aside from being a member of the lab crew, she also does algal bloom identification and monitoring the Ohio River twice a week. In the future, she plans to go to graduate school for environmental engineering; She wants to work with field and stream restoration. When asked how her summer internship is preparing her for the future, Jessi responded, “This is my first research experience. It is also my first time having a real look into the science world. Watching scientists is eye-opening and inspiring.” Jessi has loved every second of her summer internship and claims that the only downfall of the summer is the scary basements.

Internships such as these provide students valuable opportunities to expand their knowledge and skills in the fields of ecological and environmental research. In addition, the work of the interns helps to advance the mission of the Field Station and contribute to the broader scientific community.