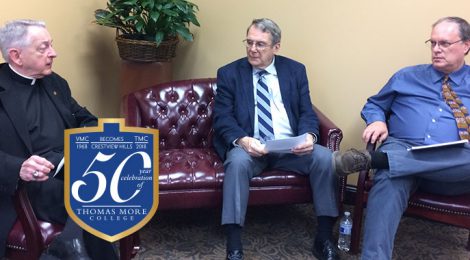 The year 1968 marked a sea change for TMC. Enrollment was at an all-time high; the new campus in Crestview Hills was more compact with classrooms, administration spaces, and student services located in buildings created to meet the needs of higher education; and, the College officially took a new name, transitioning from Villa Madonna to Thomas More College. Entering 2018, the College finds itself enjoying another period of growth. To learn how TMC has fared between these two periods of transformation, Moreover asked the three faculty members who have been around the longest to give their take on why the College has survived and thrived.

Dr. Ray Hebert, professor of history, was hired for the fall semester in 1975. In addition to teaching, Ray has filled many roles including Dean of summer session, Chairperson of both history and the expanded history, international studies, and political science departments, Vice President of Academic Affairs/Dean of the College, Director of James Graham Brown Honors Program, Director of the Gemini Program, and he has headed study abroad programs. He most recently took on the role of Executive Director of the TMC Institute for Religious Liberty. Fr. Gerald Twaddell arrived in 1977 as Assistant Academic Dean, became Director of Residence Life for one semester, and he also filled the role of Director of Institutional Research. He became Chaplain, Professor of Philosophy (also chaired the department) and has spent time as Faculty Chairperson. Jim Schuttemeyer ’76 was brought on as a faculty member in 1979. He is also an alumnus having earned undergraduate degrees in English Secondary Education and History Secondary Education. In addition to teaching, he helped coach the early women’s softball team, was Chair of the English department, headed several study abroad programs (he met his wife, when she participated in a Taiwanese teachers summer program at TMC), and is currently Humanities and Fine Arts division Chair. All three men have participated in numerous governance committees for the betterment of the college. Many of their roles were born of necessity as the nuances of the college’s path called for those devoted to its mission and ideals to step up and assist through times of transition.

What was your first impression of Thomas More College?

Ray Hebert (RH): I was excited about the liberal arts curriculum and impressed with the quality of the faculty, the number of Ph.D.’s, and the fields of study. In addition there was a booklet for VENTURE (a specific liberal arts program taught in the mid ’70s for a short time) which talked about each of the faculty that would be teaching a special first year course … in it were maybe sixteen, eighteen faculty described by their fields and their interests. They were clearly committed to students first. What I was most disappointed in was the physical plant. We didn’t have very much then.

Fr. Gerald Twaddell (GT): What Ray just said about the quality of the faculty was certainly part of my initial impression. When I began in 1977, the management was just in disarray.

RH: The first year I was here, the faculty had a vote of “No Confidence,” in then-President Dick DeGraff. Charlie (Deters) was Chairman of the Board at that time, and he became the Interim President during the remainder of DeGraff’s term.

GT: I believe the title was Provost but he (Charlie Deters) did in fact do the work of the President.

RH: Jim (Schuttemeyer) was a student here then…

Jim Schuttemeyer (JS): I had no perception of that (administration issues) but I heard stories later…

GT: Nonetheless, I think that’s where our experiences in those early years were shaped. The faculty were great, the management struggled and that may be because it (the college) got small so fast due to changes in the area’s higher education landscape.

RH: Northern (NKU) opened in 1971, there was no competition until then. Jim was a student at that time, so, in some ways, Jim has been here longer than either of us.

JS: I came in 1972. My initial impression focused on the bricks. This place felt a little bit like a monastery compared to NKU’s concrete structure. I lived VENTURE – it was great. I still remember my first seminar. The image is very visual (Jim laughs). Fr. Jack Wordeman taught it. He was 6’7″, a giant!

Who among the faculty, were “stars” to work with? Is there anyone who embodied the “spirit” of TMC?

RH: That’s easy in the history department, we had legendary faculty members: Sr. Mary Albert Murphy, SND; Sr. Mary Philip Trauth, SND (she hired me); Fr. Anthony Deye; Dr. Frank Bremer; and Nancy Bruns. They were tremendous and all my mentors, remarkable people – every one of them. We have awards named after them that we present to students every year. I learned so much from every one of them.

GT: One of my favorite experiences was with Darryl Brothers, Chair of the Art department. He was a true Renaissance Man. Every day he would come to lunch, sit down at the table, and pull out a question from his shirt pocket. He would ask people to explain things to him. He was a person always seeking to learn. Another person who was a staff member that I always enjoyed was Jim Wall. He was the periodicals librarian and he had the morning coffee club. He was the fount of rumors, some of which he created out of whole cloth right before your eyes! He had a devil-may-care attitude, not taking people seriously. The one that I feel embodied the spirit of Thomas More was Sr. Laurence Budde. (To read more about Sr. Laurence Budde and her lifetime of achievements and dedication to TMC, you can find her 2013 Moreover story here.)

GT: She just far and away had a real dedication to her discipline, a great love of the college, and was incredibly attentive to the students and their needs and abilities. She was alert to what people were really suited to do and didn’t hesitate to tell them. She was not someone to trifle with (Jim laughs) and was not afraid of anyone. She was 6’3″ and very imposing, you did not want to meet her in a dark alley!

RH: She was the first director of the Biology Field Station. On two difficult occasions in the history of the college, she assumed the title of VP of Academic Affairs as an Interim Dean. She was my mentor when I became Dean.

JS: She hired me so I blame her for this. During my first semester I had Sr. Lawrence and Jack Wordeman, I thought ‘is that what they do? Grow giants?’ (everyone laughs). She was imposing, but she could be funny, was very gentle, a character.

RH: I remember one night during the alumni fund drive, the faculty made calls and she would always do it and would call the doctors, she had taught them all. She would raise more money than anyone else.

GT: Another outstanding person was Nancy Bruns, she had a mind like a steel trap.

RH: She was a remarkable woman. She had been in the history department. When we had great need for a registrar and because SACS wanted us to have a certain percentages of PhD’s, she became registrar so we could hire a PhD into the department.

JS: I always liked the outrageous characters. Bob Berger was my best friend for many years. He would just call out the BS when he saw it.

JS: And he was very obviously gay in a flamboyant Liberace way and totally oblivious to anybody questioning that.

GT: And he collected nuns.

RH: That’s right! Some of his best friends were nuns.

What Would You Say are Defining Moments in TMC’s History During Your Tenure?

GT: I can think of three. The first major opening of our world was the building of Thomas More Parkway. It opened up access to the general public to find out where we were. That, I think, changed the public face of the college in a significant way. … The next thing was the building of Murphy Hall, that was the first time we made a move to expand our residence capacity. We had the space for the first time to allow more students in to live on campus.

RH: And these were the suites. The other dorms were double rooms.

GT: That was the second major change in how the college could perceive itself and its clientele. And then the Chapel was a dramatic shift in focus. When people drive in to the campus, they can not miss that building.

RH: I would add one more – the Connor Convocation Center because the sports teams totally revolutionized. Between the CCC and the Football Field, we had facilities on campus for games. I remember going to games at local high schools, and practices at grade schools.

JS: I worked with the Boosters for years and years and years to pay for that building. Another transforming time was the start of the football team. It brought in a big chunk of new students and began to change the diversity on the campus in significant ways. Also the women’s basketball national championship teams in terms of the publicity and the marketing value in those two years (2015/2016). Watching Sydney Moss play was also a great joy for me.

RH: Another significant shift was the TAP program and what that did in terms of the number of students in the evening program.

JS: I taught a lot of courses at night and those were some of my most fun classes. … You would watch people who had never read Shakespeare or other stories wake up in interesting ways. Now with the online world for convenience, you lose some of those personal encounters that would happen in the classroom.

What Would You Like to See Happen in the Next 50 Years?

JS: It seems the goal is exponential growth in the virtual world, but I hope this place stays small.

RH: That’s my hope as well, that even as we grow we don’t stop being a small college. Keeping that personal touch, the friendships between faculty and students.

JS: If I had my wish list, I’d like to see our Fine Arts get elevated. I see a lot of room for real growth in that area. Fine arts, media studies – a fine arts building. There is a market there to tap, a need for it. … I think there’s been another major change too, especially in the last six or seven years – every faculty meeting we were in early on, we’d complain about PR and the fact that nobody knew we were here. I believe that is starting to change in a good way, for a variety of reasons. We’re getting the word out.

RH: I don’t think it’s an accident that the three (faculty) who have been here the longest are in the humanities. The liberal arts is the heart of the college.