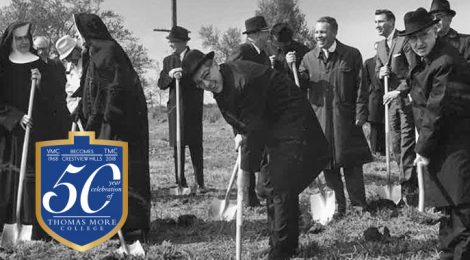 The move from Covington to Crestview Hills was just three years shy of the 50-year golden jubilee of Villa Madonna College, but the plan to relocate was devised many years earlier. Each time an evaluation committee for accreditation visited the college, it was repeatedly stressed that the physical facilities in Covington held the college back. With that in mind, a broader goal was established by the administration which focused on relocation to encourage growth of the campus in support of the academic mission of VMC.* These plans began as early as 1948 when the Klaene Property in Fort Thomas (76 acres) was purchased under the leadership of VMC Chancellor Bishop William T. Mulloy and then Dean of the College Reverend Thomas A. McCarty. A ceremonial ground breaking even took place at this site in 1950 during an official visit to the Diocese by His Excellency Amleto Giovani Cicognani, Apostolic Delegate to the U.S. and personal representative of Pope Pius XII. So how did Thomas More College come to be located in Crestview Hills and not Fort Thomas?

To answer that question required a visit to class of 1950 alumnus Charles H. Deters, J.D. Charlie and his brother Jerry built the platform for that 1950 ground breaking! Charlie is a proud VMC graduate and loved his time at the college. He and brothers, Jerry and Jim, graduated from VMC; and, nine of Charlie’s 11 children have a degree from TMC. While he was a student, Charlie held the rank of Senior Class President, was the Triad News Editor, and participated in many clubs and extra curricular activities. He also met his wife Mary Sue (Krippenstapel) ’52 at VMC. The couple recently celebrated 60 years of wedded bliss.

Mary Sue (Krippenstapel) ’52 and Charlie on the occasion of their 60th wedding anniversary.

VMC became co-educational in 1945, and Charlie was a member of one of the first classes to begin this new adventure. Latin School sent a large number of first-year male students to the College in the early days. “I was the first student from St. Cecilia Grade School to go to the Latin School, and I was the first graduate of Thomas More to become a lawyer,” Charlie said grinning. He earned his Juris Doctor at the University of Cincinnati law school. During that time, he was drafted into military service for the Korean War effort. Because he was in law school, his reporting date was postponed and he was able to stay on track to earn his degree. Once completed, he spent two years in the military stationed overseas in Germany.

Eyes were focused on this promising alumnus and upon his return, he was pressed into service as the diocesan lawyer. “I was very young,” Charlie said. As the diocesan lawyer and representative, Charlie oversaw the purchase of property and was directly involved in the negotiations to buy two parcels of land, the List and Duckley farms, located on Turkeyfoot Road. This was the first step towards finding a new home in Crestview Hills. The location was more favorable for the student commuter population who attended the College, so the land previously aquired in Fort Thomas was sold. “We purchased those two pieces of Turkeyfoot Road property, and designed the college using an architect from Louisville (Thomas J. Nolan and Sons), the same one that designed the first Covington Catholic and Newport Catholic,” Charlie explained.

Plans were completed and just as it seemed progress was being made towards a new campus, another wrinkle occurred. “Right in the midst of that, the Highway Department decides they are going to run the interstate, 275, right through the property that we had bought.” With the College’s new home in jeopardy, Charlie arranged for himself and Fr. John F. Murphy, President of the College, to meet with the commissioner of highways and the duo brokered an agreement that the interstate would only come so far over on the property, allowing the college to continue using the original construction plans. Charlie continued, “But they did come across it (the agreed upon line), and the new plans for the Interstate just ignored the agreement and took ground we were going to use for the new college. So, we had to negotiate with the state the amount of money we were going to get for the right-of-way to come through the diocesan property. We went to the meeting and got out the letter that said they would not come across that line. The commissioner blustered, ‘well, we’re not going across it or we’re going to have to pay.’” The state still reimbursed the College for the cost of the original plans. This allowed Fr. Murphy to change the architectural firm. “He (Fr. Murphy) wanted to go to a different architect, he wasn’t satisfied. The Louisville firm had never designed a college. He (Murphy) had met Perkins & Will from Chicago who had designed many colleges,” said Charlie. A new contract was negotiated naming Perkins & Will as the principle architect and designating local architect Bob Hayes (now Robert Ehmet Hayes and Associates) to oversee details and supervise on site.

There were still large tracts of land used primarily for farming that bordered the college’s soon-to-be new home. “There was a farm behind the college owned by the Kahmann family. They had an easement for their driveway that went through the college’s property to their farm. The architects and engineers provided us with an estimate of what it would cost to move that road. At a meeting one morning I said, ‘Well, why don’t we just go buy the farm?’ And we did for an amount that was less than it would take to build the road. That’s where the dormitories now sit.” The main campus is situated on what was the Duckley farm with Monte Casino Chapel sitting on the northern section of the land. The Duckley farmhouse was home to Fr. Murphy for many years.

Although momentum for the building of the new campus was slowed, Charlie’s work continued. “I think I was the first alumnus that was appointed to the board. I became a member when they were seeking accreditation from the Southern Association of Universities and Colleges. I met with the committee from the Southern Association.” To the relief of everyone in the Villa Madonna College community, acceptance for full membership with all accreditation privileges with the Southern Association was announced in fall 1959. While this was taking place, VMC entered a period of incredible growth. The downtown footprint expanded to include buildings on 12th and Scott, East 11th Street, East 12th Street, and Madison Avenue. Talbot Hall, St. Luke Hall, Bede Hall, Jude Hall, Badin Hall, Carrell Hall, Columbus Hall and additional administrative space was also added. The College was bursting at the seams as enrollment increased from 860 in 1958 to over 1,200 in 1961 to over 1,800 in 1967!

Just a small sampling of the historical documents Charlie has collected that relate to VMC/TMC.

In the fall of 1964, as Bishop Richard H. Ackerman began his fourth year as Chancellor, he announced a building program for Villa Madonna College. “I was on the committee to raise the money to build the College,” Charlie said. “Bishop Ackerman was attending Vatican II in Rome at the time and called in to be on the loud speaker to ask that this (funding for the building program) be done for him.” The November 15, 1964 Messenger outlined just what was expected from the prominent lay leaders who formed the Executive Committee. Per the Messenger, “Over 100 community leaders, alumni, and friends, representing a cross section of the college’s interested constituency, will gather in the Columbus Hall student union at the invitation of Justin M. Schneider, general chairman of the campaign. These volunteer leaders will hear about the proposed building program in its entirety. Then they will be asked to devise means and help solidify decision for the future welfare of the college.” The goal was to raise $1.5M in funds to support the building program for the new campus.

With Bishop Ackerman at the helm, focus on adequate facilities to support the excellent academic programs and reputation VMC enjoyed was again at the forefront. The Bishop made direct appeals to all parishes to support the funding campaign and Charlie recalls one such request with Monsignor Charles A. Towell of St. Agnes Parish. At a dinner meeting attended by Fr. Towell, Fr. Rolf, and Charlie, the Bishop so swayed Fr. Towell that instead of making the three year commitment that was being requested, Fr. Towell sent the entire gift in one lump sum.

The funding campaign was underway as Perkins and Will Partnership developed new plans that called for building the campus in two phases with the library, classrooms, student-union (with administrative wing), and dormitories for men and women completed first. The second phase included the science building and other necessary facilities. Plans were finalized in 1965, and a contract was executed with Universal Construction Company of Cincinnati to begin the project. Groundbreaking for the new campus was celebrated on May 9, 1966. Representatives from the administration, faculty, students, and other constituent groups (including Charlie) took part in this long-awaited event with three-rows of VIPs turning the earth with golden shovels.

It was still no easy task for the plan to reach fruition. There were delays, with one of the biggest hurdles resulting from a construction strike in the summer of 1967. The planned fall move-in day passed with the first phase not yet finished. Completion of the student-union/administration building, the academic building with classrooms and faculty offices, and dormitories was pushed to January. The library was scheduled to be finished by April 1. Move in took place during the Christmas break with students beginning classes on the new campus that January. An official ceremony laying the cornerstone at the entryway of the buildings occurred on January 23, 1968. Many hands worked to make the transition from Covington to Crestview Hills a reality. Charlie was a vital part of ushering in this new era for the College.

At Thomas More College, our high caliber liberal arts and sciences education prepares students for fulfilling careers and lives of purpose. Many of our extraordinarily talented graduates have blessed us by returning to TMC and serving in leadership roles that guide the institution and affirm its mission. Charlie Deters is one such alumnus. He answered the call to assist his alma mater during a challenging period in its history, and he helped chart the course for its future. His devotion to his faith, along with his strategic planning and negotiation skills, helped position the college for new opportunities and helped secure its place as a leader in the regional education landscape. For the last fifty years, we have been reaping the benefits of Charlie’s persistence and forward-thinking focus. For that, we thank him!