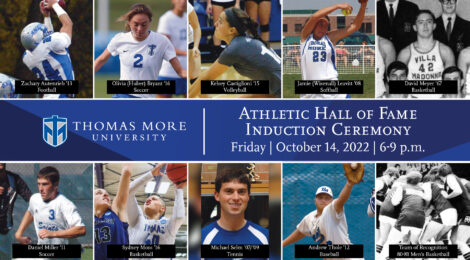 The University also presents a special recognition to the 1980-81 men’s basketball team as the Team of Distinction.The team held a 21-13 record, including a 10-6 game achievement in the Kentucky Intercollegiate Athletic Conference (KIAC). The team also saw a 12-2 record at home, including a perfect 8-0 in KIAC. They averaged 77-7 points per game without the three-point line. The men defeated Berea in the KIAC first round, falling to Cumberland (now Cumberlands) in the Semifinals.

“It has been a monumental year for Thomas More athletics as we continue to grow and take home championships,” says Thomas More Athletic Director Terry Connor. “We are thrilled to honor several of our former athletes who have shown the dedication and sportsmanship that our Saints are known for.”

For more information on all things Saints athletics, contact Macara Vonderahe, at vonderm@thomasmore.edu.

For 100 years, Thomas More has created a university for the student who wants to Be More, Do More, Seek More, Win More, Achieve More, and Create More. Since its founding in 1921, Thomas More has provided a mission-driven, liberal arts education that is based in the Catholic Intellectual Tradition. Students learn to harness the power of human reason to solve problems and discover truth, which allows them to begin the journey to become the person they were created to be. Entering into the second century, it’s time for More. Serving more than 2,000 students, Thomas More aspires to be the premier Catholic university in the Cincinnati/Northern Kentucky region, build upon its excellent return on investment (ranked #1 among private universities/colleges in Kentucky by MSN Money in 2021 and ranked #2 for long term gain in Kentucky by a 2022 Georgetown University study) and share with this generation the transformative power of the Thomas More experience. To find out more, visit thomasmore.edu.