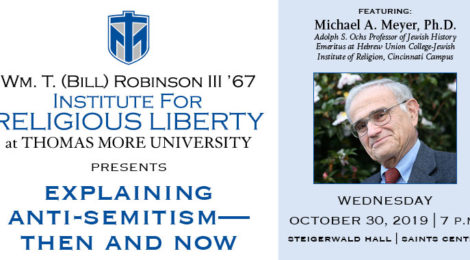 “Understanding Anti-Semitism — Then and Now,” one of eight events held by the IRL since its founding in 2015, will take place on Thomas More’s campus in Steigerwald Hall located in the Saints Center. The event is free and open to the public. This year’s theme will focus on anti-Semitism, which is the hostility or prejudice against Jewish people. The moderator for the event is Director of the Institute for Ethical Leadership and Interdisciplinary Studies Catherine Sherron, Ph.D.

This year’s guest speaker, Michael A. Meyer, Ph.D., is the Adolph S. Ochs Professor of Jewish History Emeritus at Hebrew Union College-Jewish Institute of Religion in Cincinnati. He is the author or editor of about a dozen books and nearly 200 articles in the area of modern Judaism and modern Jewish intellectual history. Meyer was born in Berlin, Germany, and grew up in Los Angeles where he received his bachelor’s degree from the University of California, Los Angeles. He later earned his doctorate from Hebrew Union College in Cincinnati.

Todd Walatka, Ph.D., is one of the two commentators for the event. Walatka is the interim director of the Master of Divinity Program and an associate teaching professor of theology at the University of Notre Dame. His specialization is in contemporary Catholic systematic theology. He has done research and has teaching experience in the areas of the ecclesiology of Vatican II, the theological witness of Archbishop Oscar Romero, theology and racism, and the relationship between Judaism and Christianity.

Shakila Ahmad, the second commentator of the night, is from the Islamic Center of Greater Cincinnati.

Ahmad has been the board chair and president of the Islamic Center for Greater Cincinnati (ICGC). She was the first woman to serve in this role in the United States. Ahmad is the founding chairwoman of the ICGC’s Muslim Mothers Against Violence Initiative. In the Greater Cincinnati interfaith circles, she has been recognized for building bridges in a difficult world. She currently serves on the Muslim-Jewish Advisory Council made up of leaders across the country whose goals are to strengthen state and federal legislation against hate crimes and to promote the contributions of Jewish and Muslim Americans. This dual-party council was organized to fight Islamophobia and anti-Semitism.