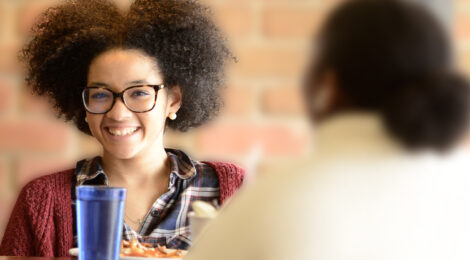 When COVID-19 first hit, it was a shock to us all. It got “real” for me when Thomas More moved to online learning. I was devastated because that meant I was not going back to campus to see my closest friends, say goodbye to senior friends, and do life “normally.” At the end of the day, we all had to make a pivot because of COVID-19. Going from in-person to online was a transition I did not like. Classrooms turned into Zooms, routine schedules disappeared, and turning my home into a library was difficult. With living on campus for the last three years, this was not normal for me. When on campus, I was able to separate home and homework. The two now were combined in one location. While difficult and unfavorable, I made it! Not only did I make it through the semester, I learned that I have the ability to adapt and to adapt well. I took this as a life lesson: while change is not fun and something we do not want, it is necessary for our growth. Change is good for the soul – it develops our character and contributes to the best version of ourselves.

Whitney Wednesdays started my sophomore year in high school. I have had an obsession with polka dots since I was in the fifth grade. It got to the point that my wardrobe was filling up with only dots. To help me not look like a clown every day, I came up with a schedule on when to wear polka dots. That special day was Wednesday, leading to Whitney Wednesdays. I took this into college, and I hope to take this into the rest of my life.

During quarantine, Coordinator of Student Engagement Summer Spille called and asked me if I was willing to make a post on the Thomas More Students Instagram account (a social media platform) providing encouragement and motivation for students. I ended up doing an Instagram Live event. As I was being recorded, I was able to interact with people who were watching as they made comments and asked questions. It was a lot of fun catching up, relating about the changes, and talking about what we missed about Thomas More. This turned into a weekly thing because people were loving it just as much as I was.

In the midst of the Whitney Wednesdays, the death of George Floyd happened. As an African American woman with an African American father and brother, this event was hurtful. As I am one of the many African American students at Thomas More, I know I was not the only one that felt this way. I thought it was essential to use the Whitney Wednesday platform to discuss this, so the “Common Ground Conversation” series was born. This live, virtual conversation served as a tool to gain perspective and to provide understanding as to why the world was seeing so many different reactions to the death of George Floyd, which came on the heels of the tragic deaths of Breonna Taylor and Ahmaud Arbery. I found this conversation to be beneficial to discuss on the Whitney Wednesday Live because it was a meeting place where not only students, but staff, faculty, and the Thomas More community could join in. The impact that I hoped to have from these conversations was to increase the understanding of those who did not recognize why these events made African Americans feel hurt and mistreated. While this kind of conversation may be uncomfortable, I have learned that we must sacrifice comfort for there to be an increase of empathy. I received many comments about the “Common Ground Conversation.” Students told me that it was insightful to be in on that kind of conversation, and professors and staff reached out to say that they were proud of me for leading the dialogue.

Now that I am back on campus, I am ready to fuel what we started in the summer. As Whitney Wednesdays continue, I want the topic of unity to continue as well. I believe that participating in this kind of dialogue is the next step to understanding each other. For actual and serious change to happen, I believe it starts with our voices – it starts by speaking up and speaking out. Understanding leads to true unity, and it is through our own voices that unity can be achieved.

I thank God for technology because it is the reason people could keep in contact during quarantine. In a time where we were told to isolate and not leave home, the thing we had was our phone and social media. The Whitney Wednesday Instagram Live events were a central, digital location for the Thomas More community to come together. Quarantine showed me the value of human interaction and how badly we need it. Whitney Wednesdays serves as a reminder for that.