For questions or to submit a story idea, contact Judy Crist at 859-344-3443.
Browse: Home   /   Campus / Student News   /   THOMAS MORE ATHLETES GIVE BACK THROUGH SPECIAL OLYMPICS KENTUCKY 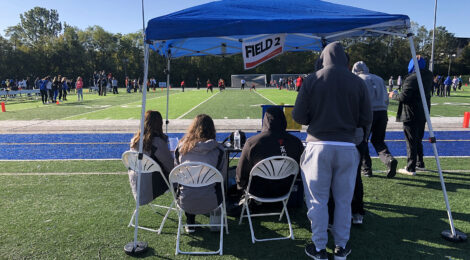 THOMAS MORE ATHLETES GIVE BACK THROUGH SPECIAL OLYMPICS KENTUCKY

CRESTVIEW HILLS, Ky. (Feb. 16, 2022) — The mission of the Catholic liberal arts education offered at Thomas More University is to encourage students to examine the ultimate meaning of life, their place in the world, and their responsibility to others. Service learning opportunities are important avenues for students to grow as individuals and to connect with their community. One organization with which Thomas More athletes have a continuing relationship of service is Special Olympics Kentucky (SOKY). This relationship is more than a decade old and in its latest rendition includes spending time cheering for and bowling with Special Olympians, hosting the Regional Flag Football Tournament on campus, and participating in the Polar Plunge to raise money and awareness for SOKY.

Special Olympics is the world’s largest program of sports training and competition for children and adults with intellectual disabilities. Special Olympics Kentucky began as a one-day event in Louisville in 1970 and has expanded to serve more than 10,200 athletes statewide annually in 15 sports.

Head Softball Coach and Senior Woman Administrator Lindsay Eagan is the Thomas More SOKY liaison and coordinates both volunteer schedules and use of campus facilities. Saints athletes who volunteer with SOKY help fulfill the University’s mission to guide students in learning their responsibility to others. “Watching our athletes interact with the SO athletes is truly special and is one of the coolest moments of every school year. The pure joy and excitement that the SO athletes have while playing, competing, and being a part of a team reminds us how much fun it is to participate in our sport each day,” Eagan explains.

Flag football was added to the SOKY sports program as an exhibition sport in 2009 and as a medal-awarding sport in 2010. It has seen a rapid rise in popularity. The 2021 tournament marked the first full flag football season for Special Olympics Kentucky in two years, due to COVID-19 precautions, and culminated with a State Run, Pass, and Catch Competition. The SOKY Flag Football Regional Tournament has been hosted on Thomas More’s campus for several years and in 2021 took place on Sunday, Oct. 17. The size of this annual event requires participation from all Saints teams (who are not traveling to compete themselves) as volunteers to facilitate its operation. The 2021 tournament featured over 100 SO athletes competing on eight different flag football teams, three of which represented Northern Kentucky, for regional titles in three divisions.

The 2021 Special Olympics event helped Thomas More international student-athlete Michael Logan build a connection to the region through his volunteerism. “It was really great to see just how much it meant to all the coaches and participants who were taking part in the event,” says Logan, a soccer player from Petworth, England. “It was infectious! Lots of the sports teams at Thomas More took the time to come to the event and support the teams who were involved and had a really good time doing it. I have been helping with the event for two years now, but this was my first year as president of the Student-Athlete Advisory Committee.”

As a follow up to a successful October Regional Tournament, Saints athletes took part for the first time in the Greater Cincinnati Polar Plunge in January 2022. The University registered a team page and requested a volunteer from each sports team to participate in taking the plunge at this frigid event. The Saints succeeded in raising more than $3,700 dollars, with individual leaders Michael Logan garnering the most donors and women’s golfer Maddie Johnson raising the most at $618. Their dollar total was a great addition to the overall dollar amount of $121,428 raised in support of Special Olympics. Well played, Saints and Special Olympians!