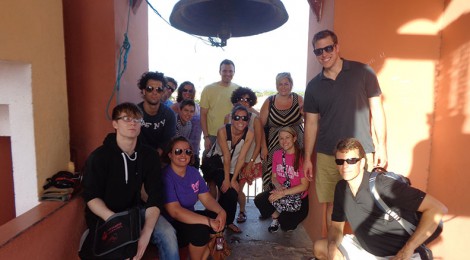 Taking Care of Business in Nicaragua

On May 23, 2014, several students pursuing bachelor’s and master’s degrees from Thomas More College traveled to Nicaragua to participate in a week-long study abroad trip. Nicaragua is located in Latin America, south of Honduras and north of Costa Rica. Our adventure began upon our landing in Managua, Nicaragua. As luck would have it, we immediately hit a snafu: one family traveling with our group lost a piece of luggage but our trip sponsor and professor, Lynnette Guzzino, came to the rescue.

Lynnette Guzzino, associate professor, business administration -Trip Sponsor, “I have a deeper knowledge, a greater appreciation for Nicaragua- its people, culture, history and economic development. Like colorful ribbons intertwined, layer upon layer, the eyes of my heart and mind have been enlightened.”

Shortly after arriving at the airport, we were introduced to our main tour guide Lorenzo Arevalo, who had a very interesting connection to the country and its history: his grandfather was the president of Nicaragua in 1967. Lorenzo gathered the group and led us to Granada, about 45 minutes away and toward the east coast. We were introduced to the urban Nicaraguan culture with a tour of Granada Cemetery, Iglesia de la Merced Church, the Fuerte La Polvora Fort, Granada Cathedral and Lake Nicaragua. Jose was our guide for the afternoon, and from Iglesia de la Merced Church we had a great vantage point to take in the amazing view of the city. We climbed the spiral staircase to the bell tower and the bells were rung as we stood at the top!

The next day, our group had a chance to settle in and relax at Lorenzo’s family home at Laguna De Apoyo, or Apoyo Lagoon. (This deep lake, just west of Granada, is the result of a huge volcano that imploded upon itself over 20,000 years ago. The resulting crater filled with rain and subterranean water, Lorenzo shared with us that the lake is 654 feet deep.) Spending time there was a nice way for the travelers to learn more about each other and catch up on what was expected for the week ahead.

Over the next five days, we learned about doing business in Nicaragua. Our group toured three companies, which are three of the biggest exporters in the nation for coffee, tobacco cigars and distilled liquors. Our group received behind-the-scenes exposure to each of these industries, which is something that most other groups (or even locals) do not have a chance to experience. Our group first visited MacerCafe (www.MacerCafe.com), where we learned about the coffee industry. To further our knowledge, we were taken to a farm where we enjoyed an off-road truck tour through the rainforest (with armed guards at our side). As the truck climbed up the side of a mountain, we learned everything from the production process to the final stage of “cupping” where the classification, taste and quality of the coffee are tested.

Next, we had the opportunity to go to the second largest cigar producer in Nicaragua, Padron Cigars (www.padron.com). At this factory, we observed the cigar hand-rolling process. Many may not know that cigars are hand-rolled. It was fascinating to see the amount of time and effort put into the creation of each cigar. A guide told us that one leaf of tobacco touches 100 hands before completing the cigar-rolling process.

Melisa Aljamal ’15, bachelor’s degree student “It inspired me to not take for granted what we are blessed with and I was inspired by Nicaragua: a country rich in history, beauty, natural wonders and culture with people that continue to strive beyond adversity and overcome their past political challenges”

Flor de Caña (www.FlordeCana.com), the largest distilled liquor company in Nicaragua, was the third business we visited. Flor de Caña’s corporate headquarters is located north of Managua in Chichigalpla. Coincidentally, our group met with Mauricio Solorzano, brand ambassador, who happened to be on location that day. We proceeded on a tour of the Flor de Caña factory where the rum is produced. Interesting fact: The barrels used in the rum’s aging process are sent from Kentucky Bourbon distilleries.

Other companies our group learned about were AMCHAM (American Chamber of Commerce), Holiday Inn, Invercasa and Burger King. Presentations by these companies covered topics such as: starting your own business, franchising, investment, and marketing in the Nicaraguan market. As a group we immersed ourselves into the culture by speaking with local politician Jose Alberto Alverado, and Minister of Culture Fernando Lopez Gutierrez.

In addition to professional enrichment, we had the opportunity to experience Granada’s nightlife and many different restaurants.Our group went ziplining at Mombacho Volcano Natural Reserve Canopy Tour, after which we travelled to the top of Masaya Volcano and peeked over the edge! Our last day in Nicaragua wasspent on the beautiful Pacific coast in San Juan Del Sur, where we enjoyed boating, fishing, swimming and surfing.

One unique aspect of the trip in particular, was visiting Thomas More Universitas located in the capital city of Managua. Comparing this institution to our College, we found that both have similar values, mascots, and goals for their students. We met with President Silvio De Franco and his wife, Director Irene Rojas, as well as numerous professors and students. Everyone appreciated the opportunity to share their experiences at their prospective schools, establish commonalities and exchange stories.

Every student at Thomas More College would benefit by taking the opportunity to study abroad. The experience brings a sense of fulfillment and satisfaction to your life. Our trip gave us a better understanding of businesses and opportunities in Nicaragua.This tripwas an enriching experience that will stay with us forever because it broadened our global awareness and opened our eyes to a new culture.

Read more about this study-abroad trip from the students’ perspective, visit their blog at: http://www.tmcnicaragua2014.blogspot.com/