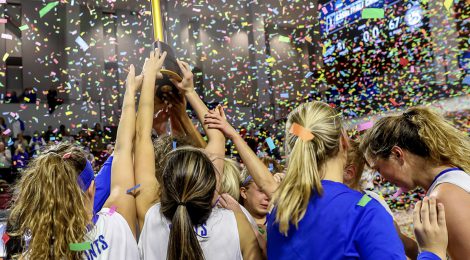 After winning round four of the NCAA tournament at home, the Saints started their journey to the Final Four and National Championship with a police escort out of campus on Wednesday, March 13. Our ultimate destination was Roanoke College in Salem, Virginia, which was the host site of the NCAA Championship, but first we headed to Virginia Tech in Blacksburg, Virginia. Virginia Tech was kind enough to allow us to use their basketball facility to get a quick practice in before arriving in Salem later that night. The team went straight to dinner at a local restaurant called Mac and Bob’s where team member Madison Temple was awarded the Josten’s Trophy by the Salem Rotary Club. After dinner, we headed to the hotel and prepared for Team Social Night which took place at the Roanoke Pinball Museum. The evening included pictures of the sun setting on the Roanoke Valley from the rooftop of the Museum and playing all different types of pinball machines. It was an absolutely fun-filled night.

Thursday was packed with activities starting with a trip to South Salem Elementary where three different third-grade classes enjoyed activities with the team. We had some friendly competition to see who could build something the tallest and just enjoyed the interaction with the kids. Later a visit to the Cregger Center where the Final Four and Championship games would be played was scheduled. We had an opportunity to take our first look at the facility and take it all in before the competition started on Friday night. Coach Jeff Hans, Madison Temple, and Shelby Rupp went to a press conference and then the team headed out to grab some lunch before practicing. Back at the hotel there were a few hours to relax before getting ready for the banquet that evening. At the banquet, the Saints had social hour with the other teams: Bowdoin College, University of St. Thomas (Minnesota), and University of Scranton. After social hour Madison was awarded the WBCA Player of the Year and the four TMU seniors were given memorabilia basketballs. Each team performed a skit or presentation, with the Saints representatives, Madison and Emily Schultz, reading a poem that #1 Saints Fan, Molly Kamer, wrote for the team about the season. Molly, now 12 years old, has been following the Saints since 2014 and has been present for every National Championship the Saints have won. The night ended on that high note as everyone started to feel the hype and anticipation of the final post-season games set to begin the next day.

Friday, March 15 – FINAL FOUR GAME DAY! The team had breakfast at the hotel and a team lunch before leaving for the pre-game shoot around. After the shoot around, the team had a pre-game meal and headed back to the arena to watch the first game of the day between St. Thomas vs. Bowdoin. Bowdoin took care of business, earning their spot in the National Championship. Finally, it was our turn. We defeated ninth-ranked University of Scranton, 69-56 in the semifinals and were headed to the final game of the season! It was a great team win with kudos going to Madison, who finished the game with 20 points, nine rebounds, six assists, and two steals; Emily added 17 points and four rebounds; Shelby had 11 points, pulled down seven rebounds and blocked two shots, while recording three steals; and Kaela Saener scored 10 points and pulled down four rebounds. After the game and the ensuing celebration, we began to focus on the Championship Game the next day.

Saturday, March 16 – NATIONAL CHAMPIONSHIP GAME DAY! The morning was similar to Friday with breakfast at the hotel and a pre-game shoot around. At the Cregger Center, we got game ready and prepared to take the floor. This was it – our chance to complete the perfect season. Four quarters later the Saints were crowned the winners of the National Championship game, with a score of 81-67 against Bowdoin. Kaela had the best game of her season, leading the team in scoring with 20 points. Shelby finished with a double-double as she had 17 points and 12 rebounds to go with four assists, and was named to the Championship’s All-Tournament Team. Madison scored 17 points, had seven rebounds, four assists, and four steals and was named the NCAA Championship’s Most Outstanding Player. Emily had 14 points and pulled down five rebounds and Briana McNutt finished with 11 points.

The feeling was so surreal! Confetti flooded the arena, everyone was making confetti angels and throwing it in the air, what an unbelievable feeling! All the Saints and Saints faithful were so happy as the celebration continued with the trophy presentation and net cutting. Coach Hans, Madison, Shelby, and Kaela were interviewed by Fox 19’s Jeremy Rausch, who was awesome enough to travel six hours to cover the season finale. The rest of the night was one big celebration with the hotel where parents and friends were staying supplying a huge banquet room where a post-game party was held.

We left Salem the next morning and arrived back on the TMU campus with another escort of police cars and fire trucks to be greeted by friends, family, and fans. It was the perfect ending to a perfect weekend of basketball!