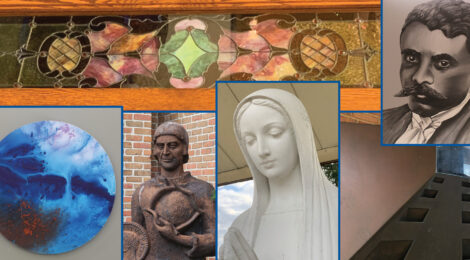 Hello, my name is Seth Sherman. I am a presidential ambassador at Thomas More University and a member of the Art@ThomasMore initiative. This initiative was made so that we can shed light on the permanent collection of artwork and artifacts at Thomas More University. Today we are looking at a stained-glass window which is located at the bottom section of the Saints Center. This window was originally at the Covington campus and rested above the front window of Aquinas Hall located on Scott Boulevard. To get the back story of how this beautiful window came here, we spoke to Dr. Schadler of the class of 1970.

The chronology of it is kind of important. I started at Villa Madonna, of course now Thomas More University, for the fall semester of 1966 and the entire campus was in downtown Covington. Now by the spring semester of ’68, the new campus there in Crestview Hills was ready for most of the offices and most of the classrooms, but not the library and not the science laboratories. That summer, they moved the library out to the new campus and then many of the older buildings were going to be torn down. I was hired, along with two other students, Jim Schmidt, and the other one was Tom Cook, and our job was to move the materials out of the old chemistry lab and then there was a classroom in the first floor of the building, and the name of the building was Aquinas Hall. So, Ken and Tom and I started moving stuff out and we were given a deadline that literally the wrecking ball was going to appear to take down Aquinas Hall on a certain date. They told us, okay, we got to get everything that’s possible out of the building.

There were actually two stained glass windows in that classroom, one was a small one and then this larger one. I had work to get the small one out, put it down, and then started on the big one. The small one disappeared and I thought, well the big one is too nice and I can’t, I did not want to have to suffer the fate of the small one. So I took it, after I got it out, and moved it into another building and locked it into the closet.

There’s very little of a few items on the Crestview campus that came from downtown. So I salvaged the stained glass window. Once the archives were up and going and Sister Mary Philip Trauth was the archivist, I contacted her and Sister Rita Marie, and said, “Hey, I’ve got this and it belongs in the archives.” When the building that it’s in now was built, it was put into its current location and I remember coming on campus; Sister Rita Murray was the director of institutional research at that point. I went into her office she says, “Oh, I’ve got something I want to show you!” She brought me over and showed me the stained glass window. They frankly did a good job of putting it in a place where people can see it and appreciate it.

To read the original story written by Dr. Daniel Schadler from the 2003 Moreover, CLICK HERE.