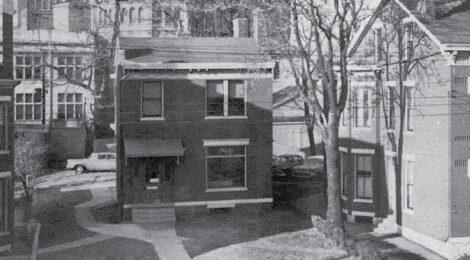 A Piece of History on Campus

On a visit to campus in May of 2000, I encountered Sister Rita Marie Mueller (formerly Sister Mary Casmira), Villa Madonna College class of 1941 and a long-time professor in the chemistry department at VMC and Thomas More. Sister Rita Marie greeted me with a smile and curious look, and I knew she was up to something.

She said she had something of interest to show me. She then led me to the lower lever of the new Student Center and showed me a stained glass window in the entryway of a conference room. With a hint of nostalgia Sister Rita Marie said, “this is one of the very few things on campus from the old days in Covington and almost no one knows the history of the window. I think you should write something about it.” Right there, standing in front of the stained glass window, I promised Sister Rita Marie that I would write something to document the history of the window. I always keep my promises, especially to my professors.

Those who attended Villa Madonna College in downtown Covington may remember that the campus extended from Madison Avenue through Scott Boulevard and over to Greenup Street; from 12th Street to 6th Street. If you remember the campus, you may also remember the colorful stained glass windows that adorned Aquinas Hall on Scott Street, which at one time had been a residence, but was renovated to fit the purpose of a classroom. Aquinas Hall housed two classrooms, which were predominately used to teach large science classes. In the building were two beautiful stained glass windows, a small one and a larger one in the front of the building. In the renovation from residence to classroom, the stained glass in the building remained intact.

In 1968, Villa Madonna College moved to Cresstview Hills, Kentucky, and was later renamed Thomas More College. At this time I was working as a student assistant for the College in the chemistry department and like many others at Villa Madonna, our department was in the process of packing things from the downtown Covington location to relocate to the new campus. Many of the buildings in Covington that served as the College’s campus were slated for demolition after the move, including Aquinas Hall.

As our department worked to clear Aquinas Hall of the College’s materials before its scheduled demolition, a maintenance supervisor pointed out that the stained glass in the building should be saved. After much effort, and without breaking it, I successfully removed the smaller stained glass window from the building and set it aside with other materials going to the new campus, then I began working on the removal of the larger one. Once the large piece was removed, I realized that the smaller one was missing. Not wanting the large stained glass to meet the same fate as the smaller one, I locked it in the trunk of my car.

In the fall of 1968, I returned to classes on the new campus in Crestview Hills and all thoughts of the stained glass went dormant. In the early ’80s, Sister Mary Philip Trauth, SND, a long time professor of history at Villa Madonna and Thomas More College, was appointed the archivist for the school. As one of her first duties, she was to put together a collection of memorabilia documenting the history of the College. Immediately I thought of the stained glass window from Aquinas Hall that had been rattling around in the trunk of my car for about 10 years. I knew the window would make a great addition to the collection, so I immediately contacted Sister Mary Philip and made arrangements to give the window to the archives. Sr. Rita Marie Mueller, SND, professor of chemistry since 1942, taught at Aquinas Hall and confirmed the window’s provenance.

The stained glass window that took me so much time to remove was now gone from my mind, not to return until a sunny day in May 2000 on the Thomas More campus. See, Sister Rita Marie, I always keep my promises!

For an video interview as part of the Art@ThomasMore series, CLICK HERE.