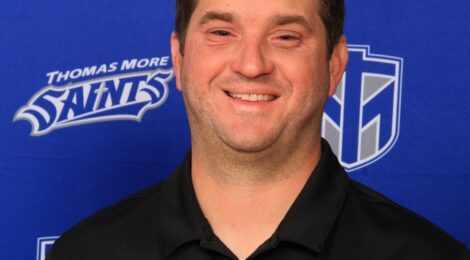 “My family and I have grown hand in hand with the University,” says Stellman. “Thomas More will always be a special place to us. I’d like to thank Athletic Director Terry Connor for his belief in me from a player to ultimately hiring me as the program’s sixth head coach. My time on campus may be coming to end, but the memories my family and I have made will live with us forever.”

Prior to coaching Thomas More football, Stellman was a student athlete, becoming a four-year letter winner for the Saints from 2005-2009, and leading the Saints to two straight Presidents’ Athletic Conference titles. Taking the offense to new heights, Stellman set multiple passing records, one being 26 passing touchdowns in a season, which still stands today. Other records from Stellman include, third in career touchdown passes (50), fourth in career passing yardage (5,328), and sixth in season passing yardage (2,032).

Stellman took the reins of the Saints offense during the 2010 season, coaching multiple record setting quarterbacks and skilled players. In 2014, the Saints were ranked third in total offense in Division III. The offense had a stand-out 2015 season, setting single-season records for most points (583), touchdowns (80), total yards (6,019), pass completions (200), and passing yards (3,411). In 2016, he led the offense in setting a school record for plays in a season (843) and most points in a quarter, scoring 35 points against Grove City College. Stellman was promoted to head coach during the 2018-19 season, having his best year with a 7-3 record.

“Trevor epitomizes the very best of what is expected of a student-athlete, a coach, and a mentor,” says Thomas More University President Joseph L. Chillo, LP.D. “His impact on the University, Saints football, and the many lives of the student-athletes he touched over the years has transformed our institution in countless ways. Trevor has established a high bar for our football program and future expectations in Athletics.”

“Trevor’s legacy here as a person, player, and coach will always be admired and respected,” says Connor. “We more than appreciate what he has done for Thomas More University and our mission; he has done it the Thomas More way.”