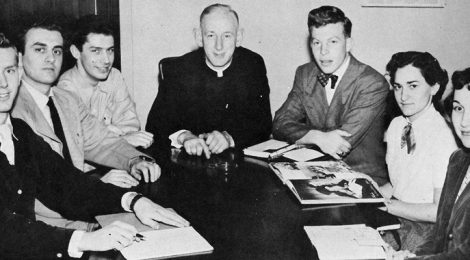 Being on staff at Thomas More affords a person singular opportunities to meet extraordinary people. I would like to thank Gary Holland ’93, who was instrumental in introducing me to his godfather, Charles H. Deters ’50, who had quite a unique perspective on the move of Villa Madonna College to Fort Mitchell (now Crestview Hills). When I spent an afternoon with the two of them and learned the historical facts behind the move, I was struck by the special relationship Charlie has with the University. During his life he was a student, alumnus, Board of Trustees member (the rst alumnus appointed) and chairperson, provost, and guiding hand as the lawyer for the Diocese. It seemed only natural that a closer look at Charlie “the student” was in order.

Villa Madonna College was founded when it became apparent that there was a need for the northern Kentucky religious orders to educate school teachers in a more e ective and convenient manner. Up until VMC’s founding, in order to receive the training required and earn a degree, students had to travel to Xavier University. at doesn’t seem like such a big deal now, but in the 1910s-1920s this was a huge inconvenience (the interstates did not yet exist) and so an all-women’s college was created speci cally to teach education to the religious orders and women of the area.

It wasn’t until 1945 that the University became co-educational, welcoming men into the ever-expanding degree programs. Charlie was a member of one of those rst co-ed classes. As a Latin School graduate, it was a natural t. Many of his classmates were also attending and he loved being in the shadow of the Cathedral in Covington where he was a Ponti cal Server in his younger years.

Unfortunately, Charlie’s higher education career did not start out exactly as he would have liked. When he graduated from Latin  School, Charlie won both the Science Award and the Public Speaking Award. According to Charlie, “My Dad wanted me to be a doctor but I secretly wanted to be a lawyer so my first year at the College was in pre-med. After my sophomore year, I finally got up enough nerve to tell him that I wanted to be a lawyer. He accepted it wonderfully, in fact it made him very happy. He said I was worried about nothing. Dad was the editor of the Kentucky Times Star and a literary person but he was very, very supportive of me being a lawyer.”

When asked what some of the most important in uences were while attending VMC, Charlie immediately credits meeting his wife Mary Sue (Krippenstapel) ’52 as one of the very, very most important moments. Mary Sue was brought to VMC by Rev. Henry Hanses from Harlan County, Ky., and boarded at the Congregation of Divine Providence Convent in Newport with about 10 other young women. She was an accomplished student earning degrees in education and art. Finding the love of a lifetime seems to be an ongoing theme for those attending VMC/TMU, and Mary Sue and Charlie’s love story has continued for over 60 years and the birth of 11 children. Ten of those children attended TMU with nine earning degrees. Charlie had a little help from VMC in making their relationship work, “We took marriage courses. e College taught marriage as a religion course for credit. I think it was a requirement. It was taught that marriage is not a 50/50 arrangement, that each person had to give 100 percent. It would only work if you gave totally to each other in all things.”

In addition to meeting his favorite companion, Charlie also credits the extraordinary education as having a lasting in hence on his life and personal philosophy. He de nitely had his favorite professors, “Sister Camille, Divine Providence nun, taught philosophy. She was an Irish woman who was just a wonderful philosophy teacher; it was always omistic philosophy. I can still hear her say ‘You come into the world tabula rasa, nihil est in intellectu nisi quod prius in sensu’ – which translated from Latin means nothing is in the brain that hasn’t come through the senses. We come into the world a clean tablet and the only thing that gets on it, is something that comes through the senses: seeing, hearing, touching. I can still hear her say that. She was just a wonderful teacher.” Another of Charlie’s favorites: “Sister Mary of the Incarnation, she was a saint. She taught us Chaucer. Instead of her lecturing, we would get her to read Chaucer and she would close her eyes and read the old English so beautifully.” Charlie also recalls Sister M. Irmina requiring him to take Latin as a foreign language: “I had to take Latin because I went to Latin School. I would’ve liked to have not taken Latin because I had four years of it already but, in retrospect, we studied the De Amicitia (About Friendship) and De Senectute (About Old Age) which are Virgil’s treatments on old age and friendship, magni cent treatises, you know it’s philosophy of life.” So many other professors also impressed Charlie with their scholarship: Mother M. Callixta, Sister M. Lauretana, Sister M. Albert, Sister Agnes Margaret, Sister M. Elizabeth, Rev. Anthony Deye, Rev. John Ramsey, and Rev. Hanses; all dedicated to the education of their students in academics and life.

Charlie also spoke of the friendships that are still weaving their way through his life. One in particular that has stuck with him is his friendship with the four elen brothers, “ e elens graduated behind me but all four worked for us (Deters Brothers Builders). GJ (George J. elen ’58) and I were very close friends, we had GJ and Sue’s wedding breakfast at our house. I recall he came over to the o ce after working for a big company in Cincinnati and said that he would like to go into business for himself. I encouraged him to do that and went to the bank with him. We talked to a Mr. Cooney, and of course I’m saying how great GJ is, how when he worked for us he was a real hard worker and he went to Notre Dame. Finally, Mr. Cooney says, ‘Okay Charlie, if he’s so good, you sign too,’ and I did! Their mother, Maureen ( Thelen), was a nurse and she was present for the birth of our children. They are a wonderful family!”

When asked if there was any one thing in his life that he would attribute to divine providence or the grace of having attended VMC, Charlie came back to family. “We have a boy, Seth, who has a bit of Cerebral Palsy and some retardation, he graduated from Redwood School. He works everyday on our farm, gets up at 5 a.m., he’s 50 years old now but his work is his life. Everyone knows him at Simon Kenton, he goes to the basketball games and for Homecoming he orders a wrapped rose for each of the cheerleaders. He’s their mascot. He has purpose in his life, he’s happy when he’s working but when you have this type of thing happen (a child born disabled), you have a struggle. I can still hear Sister Camille saying, ‘To be is better than not to have been. To be in any condition is better than not to have been. at’s the worst, not to have been.’ I used to say that all the time to myself and it made the challenge of Seth’s disabilities easier, he’s very important to our family. at philosophy can also be seen as the argument against aborting a defective child.”

The final question for Charlie, one of VMC/TMU’s most successful alumni, was to share his advice for success with today’s students. His advice was quite simple: “Your life is what you make of it. There’s no free lunch, YOU have to make it.” A powerful challenge to today’s generation to aim high both in their academic careers and their future endeavors.