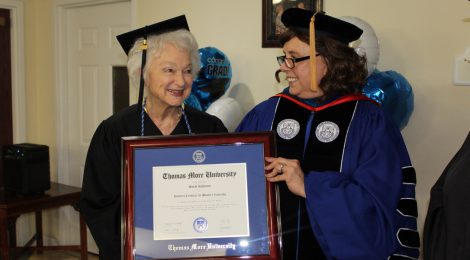 Dedicating her life to volunteer work, Kahmann always wished to receive a college degree. TMU Acting President Kathleen Jagger, Senator John Schickel, Second Wind Dreams Director of Community Relations Amy Safran, Colonial Gardens Activity Director Beth Wood, and local volunteers made this dream a reality last Friday afternoon at a ceremony honoring Kahmann at Colonial Heights and Gardens in Florence, Kentucky. During the ceremony, Jagger presented Kahmann with an Honorary Certificate for Women’s Leadership from TMU, the first to ever be awarded from the University.

“Because she prioritized being a wife and mother, Ms. Kahmann was not able to pursue a college education,” said Jagger. “This did not prevent her from contributing in lasting ways to her community.”

In 1992, Kahmann founded Enough is Enough, a national organization that voices concerns about pornography and its connection to the sexual exploitation of children. Kahmann moved to Kentucky in 1993 and was active in multiple local groups, such as the Kenton County Republican Women’s Club and the Florence Women’s Club.

“In her efforts to lead a movement protecting children from child pornography, particularly on the internet, she has met many national and world leaders, including Pope John Paul II,” Jagger added. “Her work earned support across political party lines and many faiths.”

The ceremony began with a procession, mimicking a procession that would take place at a university, which included Jagger, Schickel, Safran, Wood, and Kahmann. Kahmann, dressed in cap and gown, was accompanied by her two daughters, Barbara Amato, Florence and Lynne Einhaus, Ph.D., Richmond, Virginia, and family. Kahmann’s legacy, the certificate presentation, a special message from Kahmann, and a presentation of flowers all led to a final round of applause from the guests in attendance as Kahmann became an official alumna of TMU.

“I always wanted to go to college,” said Kahmann. “I never got to go myself, but I wanted to, and, all of a sudden, at age 90-something, I thought maybe I should do that! I am so honored to be finally getting a college degree. It’s something I used to dream about.”

Kahmann grew up in a boys’ orphanage on a dairy farm outside of Hershey, Pennsylvania. Her parents operated Brookside Farm and served as house parents to 21 boys as part of a philanthropic endeavor of Milton Hershey, the famed chocolate company. Kahmann was encouraged to live beyond her thoughts at a young age by her mother.

Kahmann has worn many hats during her 91 years. She has taken on the roles of wife, mother, assistant pastor, vice president of the National Coalition for the Protection of Children and Families, founder of the Religious Alliance Against Pornography, member of the Family Life Committee, founder of Enough is Enough, member, chaplain, and historian of the Kenton County Republican Women’s Club, and appointee of Kentucky’s Commission on Women.

Kahmann continues to be an inspiration to women, encouraging them to stand up and make a difference in the world.

Second Wind Dreams® is an internationally-known nonprofit organization changing the perception of aging through the fulfillment of dreams and the offering of the patented Virtual Dementia Tour® to help caregivers understand the physical and cognitive challenges facing those with dementia. Founded in 1997 by award-winning geriatric specialist PK. Beville, M.S., the Atlanta-based organization is recognized as the first in the nation to focus on enhancing the quality of life for elders through the fulfillment of dreams. For more information, visit www.secondwind.org.

Colonial Gardens is a part of the Retirement Housing Foundation, a not for profit foundation. It is part of the 17-acre campus featuring Colonial Heights an Independent Living Community as well as Colonial Manor Memory Care. Colonial Heights and Gardens offers spacious apartment homes with affordable monthly rents, allowing residents to pursue an active, fulfilling and supportive lifestyle. Colonial Gardens and Manor offer assistance with bathing, dressing, grooming and medication management.