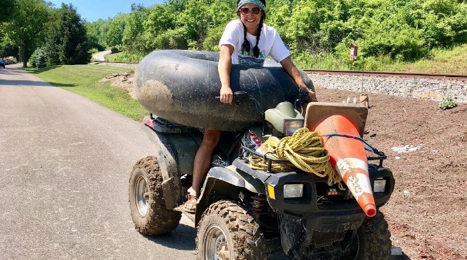 A Pretty ‘Sweep’ Cause

Styrofoam cups, toy dinosaurs, giant innertubes, fully intact lightbulbs, even hidden messages inside of glass bottles- these items provide a glimpse of what one can expect to uncover during the annual Ohio River Sweep. Since 1989, the Ohio River Valley Sanitation Commission along with several environmental groups and natural resource agencies have organized an event that brings thousands of volunteers together to clean the 981-mile shoreline of the Ohio River and its tributaries. This cleanup typically takes place on a Saturday morning in June when volunteers travel along the shoreline, gathering trash, debris, and other pollutants. Participation spans across Illinois, Indiana, Ohio, Kentucky, West Virginia, and Pennsylvania; Six states working together to protect internal American waterways.

Plastics and Tires and Metals, Oh My!

So how does trash get into the river in the first place? During storms, rainwater will carry debris into creeks and streams. This debris includes branches and sediments, but it also includes trash. The natural flow carries whatever is washed into the water downstream to larger bodies of water. Whether the trash was tossed into a creek upstream, or if it was accidentally dropped on the ground in a local park, it still ends up in the river, waiting to encounter one of the hundreds of species that inhabit the Ohio River. Much of the trash gets washed up onto the shoreline, leaving not only an unappealing look for the river but also many dangers for the wildlife.

The plastic pollution is particularly harmful because it can take hundreds if not thousands of years for it to break down, remaining in the ecosystem far after it has been thrown away. Becoming entangled, mistaking plastics for food, and exposure to chemicals all lead to consequences for the wildlife and environment as a whole.

But there are dangers to animals throughout the ecosystem beyond those who mistake plastics for food. As you go up the food chain, animals take in everything that the previous animal also consumed, including toxins. Since there are smaller populations at higher trophic levels, these individuals are subject to a higher concentration of these pollutants. This is called biomagnification when there is an increase in the concentration of harmful chemicals as you move up the food chain.

Toxins accumulate in the tissues of species at the top of food webs in higher concentrations (Photo Credit: Wikipedia)

The land around the water is also impacted by the pollution. Chlorinated plastics, a very common material used in piping in water, cause harmful chemicals to seep into the soil around the river, which can find their way into groundwater and drinking water. Additionally, humans and other land species get exposed to chemicals such as Bisphenol A, or BPA, used in many plastics such as bottles and adhesives. While the impacts of these chemicals are not fully understood, current research has shown that high doses of these chemicals in humans may lead to health problems such as reproductive issues, skin problems, and eyesight imparities. This adds the risk of chemical ingestion to any organism that drinks the water, even humans!

The Thomas More Biology Field Station has hosted volunteers for the Riversweep on its site for the 29 years in a row. Field Station Director, Dr. Christopher Lorentz, has been in this river cleanup ever since its inception and has been an active member in many other conservation efforts for decades. This year, dozens of Thomas More students, faculty, and friends gathered to take action and remove litter and other debris along the banks of the Ohio River, our region’s most important natural resource.

Every volunteer is provided a trash bag for smaller pieces of debris found along the banks, however creative thinking and teamwork are often required to transport the items that are a bit too large for the bags. Debris from the last rain storm, plastic bottles, glass shards, tires, buckets, plastic bags, children’s toys are all things you can find along the banks.  We have a contest every year for most interesting, most useful, most bizarre object found in the river. We could have easily spent weeks cleaning – you cannot walk more than 3 steps without finding a piece of trash below your feet. The trash is also buried under the sand to the point that most of the trash isn’t even surfaced, therefore it doesn’t get picked up.

I care a lot about the Ohio River so it’s very concerning to see the amount of trash along its shores.  Before I began studying water ecosystems, when I saw a piece of trash in a stream or river, I knew it was bad, but didn’t understand the full implications. The more I studied and experienced, the more I realized that even the smallest piece of plastic or a single wrapper could negatively affect not only the environment but the people I care about most. At the Thomas More Biology Field Station, one of the ways we study the health of the river is by examining samples of the fish populations for DELTs- Deformities, erosion, lesions, tumors. Most of the fish we catch do not have any, however, I can never help but to wonder that if the DELTs would decrease if there weren’t so many pollutants in the water.

The Ohio River contributes to the daily lives of millions of people who use its waters to drink, grow plants and food we eat, and make goods that we buy. It is a focal point for many local writers and artists, and a prime location for fisherman and families. Not only is this pollution bad for the species in the water, but it also shows an inaccurate representation of the Ohio River as a whole. The river is extremely diverse and very clean for a body of water with its diversity and size, a fact that belies its appearance most days. Events like Riversweep are getting people involved in actually making positive change happen. While it may seem like a small act to pick up a piece of trash on the banks of a river, enough small actions from enough people will lead to a great change.

To find out more sweet information and how to get involved, please visit  http://www.orsanco.org/river-sweep/and www.thomasmore.edu/fieldstation.

Also, check out this video by Chris Anderson from scienceovereverything.com showing some work being done at Thomas More’s Biology Field Station this summer!