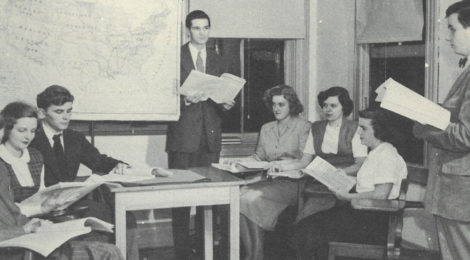 Carl Gamel and I had a relationship long before I arrived at Thomas More University. My oldest born child is his granddaughter and was a source of joy for both he and his wife, Mary Sue, before they passed away. It wasn’t until his death in 2017 (CLICK HERE for Carl’s obituary) and subsequent attendance at the funeral that I discovered he was a VMC graduate and classmate to many other alumni I’ve had the pleasure to meet. It was while assisting this granddaughter with a move that I discovered four written volumes he had gifted to her —
an autobiographical tribute to his experiences at various stages in his life. Volume one is entitled “Twenty-Five Years” and covers his early life: his family ties in the area, early memories as a child, first jobs, the time he spent at Villa Madonna, and being drafted into the army.

This history column includes several chapters which the Gamel family has graciously agreed to let me share with our readers. They, and I, believe Carl would be tickled to find out his musings are being read far and wide by his alma mater’s alumni. At the point where we pick up the story, Carl had graduated from high school in 1945 with plans to go to the seminary at St. Meinrad in Indiana. His father passed away that same year in November which ended his higher education plans in the short term. It took two years for the family to get back on its feet with a new “normal” and revisit Carl’s desire to return to school.

By 1947, my family was settled and doing alright. Mother was working at H. & S. Pogue Company in the alteration department and seemed to be happy. I had been working at Deringer Meat Market for two years since Dad died. Frank was married to Jackie Deitemeyer and living in Jacksonville, Florida. Anna was married to Ed Ginter. The only ones still living at home were Eddie and me. We were getting along without any real problems.

I talked to Mother about going back to school and it was decided that we would look into the possibility. As I mentioned, when I graduated from Newport Catholic High School in 1945, I received a four-year scholarship to Villa Madonna College. This was a coed liberal arts college in downtown Covington. The campus was scattered in makeshift buildings all around the area of 12th and Scott Streets.

Father Thomas A. McCarty, who Eddie was named after, was dean of Villa Madonna. He had been a friend of the family for years. We phoned him and asked if we could see him. He graciously agreed. We told him what our circumstances were and asked if he would make an exception to the rule that a scholarship must be used when awarded. He thought about it briefly and said, “If you will take as many credits during the regular school year, including Saturday classes and go through the summer so you can graduate in three years, I will make the exception.” And that is how I got through college.

The Faculty of VMC

I was soon to learn many interesting things about college. Most of the faculty were Ph.D.s. They earned their degrees from colleges and universities all over the United States.

We were taught by members of the “Universal Church.” Our instructors were secular priests from the Benedictine and Dominican orders; nuns from the Sisters of Notre Dame, Sisters of Divine Providence, Sisters of Charity, Sisters of St. Benedict, Sisters of Charity of Nazareth, and the Franciscans; and lay teachers. All were talented and dedicated to Catholic education and exceptional examples to follow. The dedicated teachers knew it was their job to inspire, direct, and guide.

Formal religion classes were conducted by Father Dennis Kane, a Dominican, who never let you forget the order he joined. Since most of our professors were members of a religious order, it seemed that all were “breathing” into the courses their “tidbit” of religious information.

The Student Body of VMC

The student body was comprised of an unusual group of young and old, lay and religious – just like the faculty. There were girls and boys just graduating from area high schools, younger boys graduating from Covington Latin School, veterans of World War II who were older and seasoned with battle scars, religious, and more. Diversity was the norm.

Each student shared one goal – to get the best education they could. Most studied and worked hard; all were congenial, interested, sincere, and determined.

The education of the “whole” person was the goal as the college offered: Art, Science, and History; Physical Education along with Sports; Nursing, Sociology and Language, Spanish, German, and French; Education classes for teachers; Mathematics, Latin, and Greek, along with Philosophy and Religion.

In daily faculty-student and co-student relationships, young men and women were constantly aware of the principles of justice and charity as well as the studies that integrated all Christian principles in all departments.

Before each class began, a prayer was said. Every teacher was extremely interested and helpful – most going out of their way to assist their students.

The teachers knew each student by name. Most of the students knew each other as well. It was a good place to study and learn.

I was never interested in sports; however, the basketball and baseball teams performed well considering the size of the school.

The Student Council governed with the faculty, watching every student activity. Among the many committees it governed, the biggest was the Eucharistic committee that looked after the religious programs and activities – opening day masses, first Friday celebrations, etc.

Mixed in with the studies, the students attended dances, sponsored plays, held parties at Christmas and Thanksgiving, participated in debates, and attended retreats. Students were active in the many campus clubs, along with participating in the Fraternity and Sorority.

On the Monday following the prom dance, Sister Mary Immaculate, CDP, remarked to her English class, “I was embarrassed by what took place at the prom on Friday night.”

You can imagine the thoughts that raced through the minds of her students, wondering about what shocked her. Finally, after some crazy remarks, Sister said, “I was surprised to learn that one of our young ladies was chewing gum at the dance.”

With that, everyone broke out into laughter. When the laughter subsided, Sister said, “You chew gum in private or in your closet with the door closed.”

Sister Camilla was a “brain,” a Ph.D. She was well-qualified to head the department and an excellent teacher who didn’t put up with any nonsense. Sister was helpful when asked, but she was rather aloof otherwise. I wrote my thesis on “Art and Morality” under her direction.

Ironically, Sister’s twin sister was a member of the CDPs and worked at the Melbourne convent in the kitchen.

One of the many courses Father Ramsey taught was Ethics, while assisting in the Philosophy Department. His first day in Ethics class was different from most teachers. He brought in an armload of books and deposited them on his desk. He then said a brief prayer and picked up the books one by one, telling the class why he rejected that particular book. Finally, he came to the last volume and told us why he chose that text for us to use.

The class soon learned that Father had a photographic memory. This information caused members of the class to ask questions about subjects that were not being covered that day. Father would say, “I haven’t time to discuss that now. Go to page number 7. At the bottom of the page, you will find the answer…” And sure enough there was the answer. This happened over and over as the year progressed.

Father Ramsey was also noted for his “pinpoint” bombing tests. It seemed that every day or two he passed out a slip of paper that was about an inch deep and eight inches wide with questions that covered the material we were to know. A limited amount of time was allotted for each student to answer the questions and return the paper for “grading.”

He was an excellent teacher and most of the students enjoyed his class.

Mother M. Callixta, CDP, was head of the Education Department and was assisted by Sister M. Irmina, a Benedictine nun, who taught many classes I was required to take so that I could teach elementary school. Sister M. Rosina, CDP, taught German, while Sister M. Ernestine and Sister Agnes Margaret of her order taught various courses in English.

Though I did not take any courses from Sister M. Julitta, SND, I knew and respected her. She headed the Chemistry Department and was instrumental in getting graduates into the professional schools in Lexington and Louisville, where she saw many of her former students become doctors and dentists.

I was required to take music taught by Sister M. Marcella, OSB. Sister Elizabeth, a Benedictine nun, taught religion in a surprising way, while she “pounded” mathematics into our head.

Father Anthony Deye, a secular priest of the Diocese of Covington, helped with instructions. Many years later, Father Deye marched in the civil rights movement… and still later helped at a Covington inner city school where my daughter, Susan, was principal.

Father John F. Schuler, Ph.D., taught mathematics at both VMC and Newport Catholic High School. He was an excellent teacher, who didn’t put up with any “clowning around.” He was a serious, interesting teacher who had a lab at the University of Cincinnati where he taught and conducted experiments in physics. He was also chosen and went to Bikini Atoll for the viewing of the dropping of the Atomic Bomb.

Designing and Financing a Cafeteria

Probably the greatest extra-ordinary achievement of my college career was the part I played in designing a cafeteria in Bernard Hall, which was an old two-story building on the west side of Scott Street. We had to get permission, of course.

A group of students created the plans, were promised donations, and did all the groundwork to convince the faculty that we could design the cafeteria at no cost to the college. Approval was granted and in a short time, with the help of many hands, a former drab classroom became a bright, beautiful painted cafeteria.

The Triad was the name of Villa Madonna College’s school paper. I worked on the paper doing every job that needed to be done. I finally became editor of the paper in my senior year.

It was an interesting little paper that most enjoyed reading. In an effort to get a point across, a “Letter to the Editor” would appear about a situation and would be signed with three initials. Some of the messages we wanted to express were too strong of a controversial matter, so this was the way we conveyed our ideas. Many students participated in initialing these letters.

The Graduating Class of 1950

While attending college, I worked as a clerk at Blank’s Pharmacy on the northwest corner of Fourth and Overton Streets in Newport. It was located one block from my home on 401 East Fifth Street.

On May 29, 1950, I graduated from Villa Madonna College. Among the 69 students in the graduating class were 45 men and 24 women, 12 of which were nuns – each earning a Bachelor of Arts and Science degree.

I majored in Philosophy and minored in English and History. At this point in time, I was not thinking of any particular type of employment. My educational background did not prepare me for a particular occupation, but did enable me to pursue employment in many fields. In all honesty, I didn’t know what I wanted to do…but the Army changed all that.

CLICK HERE to purchase Carl’s book series online. They can also be found in the Thomas More University library.