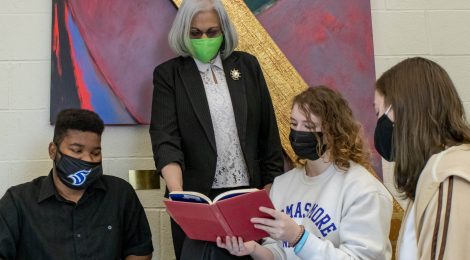 Liberal arts education has its roots in classical learning in which the interrelationship between the application of knowledge in the trivium (grammar, logic, and rhetoric) and disciplinary expertise in the quadrivium (astronomy, arithmetic, music, and geometry) served to develop wisdom and prepare individuals for civic leadership.

A liberal arts education was the foundation for preparing a free person for civic life through public debate, serving on juries, and military service to the nation. Classical liberal learning, however, was accessible only to privileged members of society, the free citizens of Greece and Rome. And even when medieval and Renaissance thinkers expanded the concept of the liberal arts, access to this education continued to be the domain of the privileged classes. In the U.S., “The Yale Report of 1828” concretized the philosophy of the liberal arts; even in the US, however, liberal arts colleges initially enrolled the privileged classes, primarily men.

Catholic colleges in the US, however, developed to provide access to education for those shut out from other institutions, particularly Catholic men at first, and later women, immigrants, and the poor, and rooted liberal learning in Catholic social teaching, the fundamental principle that all human beings are made in the image of God, and therefore, that all creation, in its very diversity, celebrates God. Catholic education thus extended liberal learning to all individuals who wished to develop to their fullest potential. A liberal arts education at a Catholic university involves developing students to serve and lead in all fields of importance to our evolving communities: as Church or lay servants, business leaders and pioneers in technology, scientists and explorers, artists and socio-political advocates.

At a Catholic university, we explore our relationship to each other, the world around us, and God, not with a tabula rasa, but by engaging with the Catholic Intellectual Tradition, a rich exploration by others who have also grappled with these relationships. Our restless search for truth recognizes that the bounds of knowledge continue to expand as new knowledge is developed through teaching and research. And precisely because humanity’s quest for truth is infinite and our understanding of our relationship to each other, the world, and God is regularly revitalized by new knowledge, education at all levels – in formal schooling and in vocational training, in the undergraduate and graduate classroom, in traditional disciplines and professional fields, in formal classes and informal settings, through readings and discourse with others – falls within the ambit of our Catholic educational mission.

In preparing students in 2021, therefore, for lives that will extend into the 2060s, 2070s, and beyond, the interconnectedness between traditional disciplines and professional preparation remains fundamental; in offering programs in traditional disciplines and in professional fields (constituting the liberal arts in practice), we develop students for service and leadership in their local, national, and global communities. We develop engineers who can build strong bridges but also attend to the social and environmental impact of the bridges they build; we develop doctors who can care for their patients through the marvels of modern medicine but also take into account the long-term implications of their patients’ dependency on drugs; we develop business women and men who contribute to increasing resources but also make ethical decisions and commit to social justice in their relationship with others.

At the heart of a twenty-first century, Catholic liberal arts education lies a restless pursuit of knowledge, firm commitment to educational access for all, sustained attention to developing the whole person, deliberate integration of theory with practice, and a united focus on empowering students to serve and lead their communities for the common good.