For questions or to submit a story idea, contact Judy Crist at 859-344-3443.
Browse: Home   /   Thomas More University to present Amanda Netburn on “Expeditions in Ocean Exploration” as part of lecture series 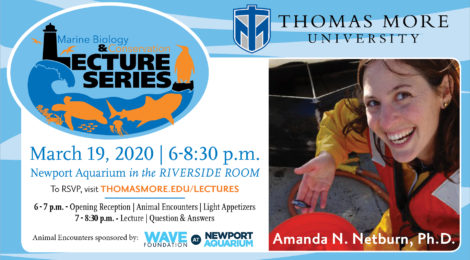 The event will start at 6 p.m. with animal encounters, courtesy of the WAVE Foundation, and refreshments. The lecture will begin at 7 p.m. and will be followed by a question and answer session to conclude the program. Those interested in attending can register at thomasmore.edu/lectures.

Netburn is an oceanographer at the National Oceanic and Atmospheric Administration’s (NOAA) Office of Ocean Exploration and Research, where she serves as a program manager for ocean exploration grants and leads efforts to advance exploration in the water column. Netburn advises on NOAA Ship Okeanos Explorer and other expeditions and develops novel partnerships with federal, academic, and industry interests. She earned a doctorate in oceanography and a master’s degree in marine conservation and biodiversity from the Scripps Institution of Oceanography at University of California, San Diego.

“By highlighting current research in marine biology and conservation, this lecture series is a great example of how Thomas More’s collaboration with Newport Aquarium and the WAVE Foundation makes an impact in our local community,” said Stephanie Snyder, Ph.D., assistant professor of biological sciences. “We are so excited for the opportunity to share Dr. Netburn’s work in ocean exploration with the general public in this upcoming lecture.”

The lecture series is a joint effort between Thomas More and the Newport Aquarium to address and promote critical issues in the fields of marine biology and conservation. Speakers for the lecture series are scientists, naturalists, educators, and other professionals working in related areas. Netburn will be the 10th speaker in the ongoing series. The lectures focus on a variety of topics and are geared toward the general public and students of all ages.

Newport Aquarium, named one of the top 10 U.S. aquariums in 2019 by USA Today’s 10Best.com and one of the top U.S. aquariums 2016 by Leisure Group Travel, has showcased thousands of animals from around the world in a million gallons of water since 1999. Named a top U.S. aquarium by US City Traveler and Destinations Travel Magazine, and also by Travel Channel, Newport Aquarium is a Herschend Family Entertainment company and an accredited member of the Association of Zoos and Aquariums. Newport Aquarium is open to the public 365 days a year and is located across the Ohio River from downtown Cincinnati at Newport on the Levee.