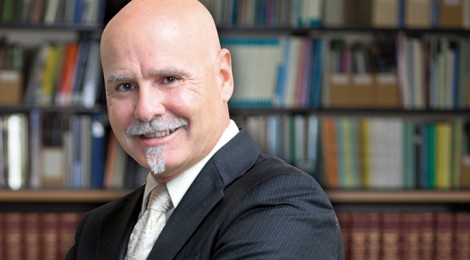 History chair Jim McNutt, Ph.D., published in the Harvard Theological Review, sheds light on the darkness behind the pre-Holocaust teachings of a famous Christian minister

Anyone who knows TMC History Chair and Professor James E. (Jim) McNutt, Ph.D., recognizes his passion for taking an archaeological approach to history, shoveling below the surface in search of the meaning behind historical accounts and the people who were responsible for them. In recent years, his tenacious digging on the subject of German churches and societal attitudes toward Jews on the eve of the Holocaust has resulted in the attention of theologians, internationally recognized scholars, organizations, and publishing houses. 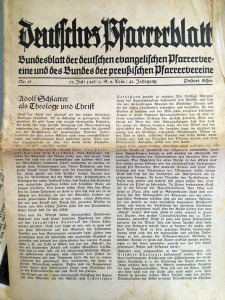 Professor McNutt’s extensive research while on sabbatical in Germany resulted in taking many photos of manuscripts from the period, which he then intensely studied for insight into Schlatter’s message.

Dr. McNutt’s research has specifically turned a critical eye toward Swiss-born Adolf Schlatter, a highly revered Protestant minister whose lectures at Tübingen were said to have shaped at least two generations of German pastors, including a number of academic elites who profoundly influenced 20th century Christian theology. Schlatter’s influence at the German university led him to be viewed as the preeminent spiritual authority for students and clergy alike. As the first English-speaking scholar critical of Schlatter, McNutt’s exploration of the influences and messages behind Schlatter’s teachings is explained in his article, “A Very Damning Truth: Walter Grundmann, Adolf Schlatter, and Susannah Heschel’s The Aryan Jesus,” published by the Harvard Theological Review in July of 2012.

McNutt described how his findings attracted the attention of such a highly respected journal. “In 2003, I published an article titled, ‘Adolf Schlatter and the Jews’ in the German Studies Review. This article was the first critical evaluation of this very prominent theologian in the English language. A lot had been written about him in English, but all of it deemed him infallible. Two key scholars picked up that work. One of them was Susannah Heschel, a leading scholar at Dartmouth, who referenced me in her major book The Aryan Jesus. My research was the basis for her section on Schlatter in that publication, which became very well-received and popular,” he explained.

Following the success of Heschel’s book, the American Academy of Religion contacted McNutt and asked him to present his research at the Academy’s 2010 Conference. That presentation resulted in attention from the Harvard Theological Review, who requested that he rewrite his paper for publication. After it was published in 2012, McNutt has periodically been contacted by people eager to learn more about his research. Most recently, he was asked to contribute to a collection of essays written by Holocaust scholars published by Northwestern University Press in Chicago: Lessons and Legacies XI – Perspectives on the Holocaust in a Changing World, edited and with an introduction by Hilary Earl and Karl A. Schleunes, due out this November. In McNutt’s essay, “The Bitter Legacy and Unlearned Lesson of Adolf Schlatter,” he examines Schlatter’s final major work, Do We Know Jesus? which became an instant success at the time of its release in 1937. In his essay, McNutt described Schlatter’s book: “Despite its devotional nature, when set within the context of the ideological tensions gripping Germany at the time, discerning readers today discover a much darker legacy of untimely and bitter verbal assaults on Judaism and the Jews.” 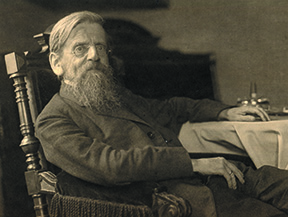 McNutt credits TMC Philosophy Professor Rev. Gerald E. Twaddell, Ph.D., for his critical insights, and librarian Joyce McKinley for helping obtain the source material related to his research. He reads German well, but said that it’s hard work: “I have to get it right because many people who are reading this are German scholars, and my translations have to be on the mark.” McNutt said this niche aspect of Holocaust history is important because many of the works of theologians like Schlatter are still used as examples today. “Schlatter was an untouchable icon within conservative Christianity. I have been reading him for 30 years, starting when I was in graduate school. Then I began really looking at what he was saying. I think it is vitally important to study the words of Christian ministers during that time. He became a hero, but he represented a very negative view of the Jews prior to the Holocaust,” he explained.

McNutt’s research included a trip to Germany in 2013, during his sabbatical, where he spent two weeks at the Schlatter archives, collecting materials that will further his research and touch upon examinations that no one else studying the famed theologian has written about. He’ll continue looking into the impact of the teachings of Schlatter and other Christian ministers of that time in an effort to shed light on such a dark, critical time in the world’s history.

← A Grand Journey
Breaking the Power of Addiction →