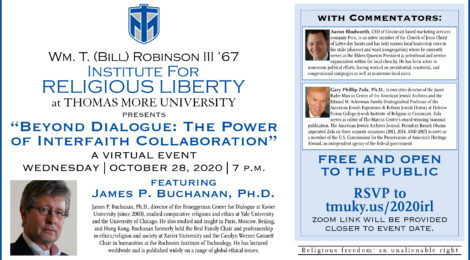 “Beyond Dialogue: The Power of Interfaith Collaboration,” the 10th event held by the IRL since its founding in 2015, will take place virtually on Zoom. The event is free and open to the public. To RSVP, visit tmuky.us/2020irl.

Buchanan, director of the Brueggeman Center for Dialogue at Xavier University, studied comparative religions and comparative value systems at Yale University and the University of Chicago, where he completed his doctorate. He also studied and taught at the Sorbonne in Paris, the University of Moscow, and the University of Beijing. His research has focused on ethics, global systems, comparative religions, and the interfaith dialogue, for which he is known internationally. Buchanan formerly held the Besl Family Chair in ethics/religion and society at Xavier University and, prior to that, the Carolyn Werner Gannett Chair in humanities at the Rochester Institute of Technology. He has lectured worldwide, delivering more than 300 lectures and talks on related issues such as interfaith relations and global ethnical issues.

Aaron Bludworth is one of the two commentators for the event. He is currently the CEO of Cincinnati-based marketing services company Fern. He is an active member of the Church of Jesus Christ of Latter-day Saints and has held various local leadership roles in his stake and ward, where he currently serves as the Elders Quorum President. He has been active in numerous political efforts, having worked on presidential, senatorial, and congressional campaigns as well as numerous local races.

Gary P. Zola, Ph.D., the second commentator of the evening, is the executive director of the Jacob Rader Marcus Center of the American Jewish Archives and the Edward M. Ackerman Family Distinguished Professor of the American Jewish Experience & Reform Jewish History at Hebrew Union College-Jewish Institute of Religion in Cincinnati. Zola serves as editor of The Marcus Center’s award-winning biannual publication, The American Jewish Archives Journal. President Barack Obama appointed Zola on three separate occasions to serve as a member of the U.S. Commission for the Preservation of America’s Heritage Abroad, an independent agency of the federal government.

Ray Hebert, Ph.D., director of the IRL since 2016, has highlighted that the most recent programs, including this one, have been a reminder that a sub theme for the IRL programs is the importance of promoting civil dialogue, especially at a time when our society has been so divided politically.

The Wm. T. (Bill) Robinson III ’67 Institute for Religious Liberty (IRL) serves to advance the American concept of religious freedom as an unalienable right and the protection of this right for all people. It was established in 2015 after several local business and educational leaders, including representatives from Hebrew Union College, discussed the need to celebrate and educate others about the constitutional privilege and right to freely worship and practice religion.