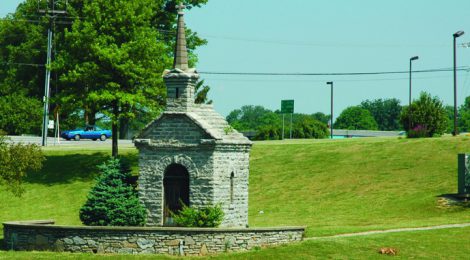 Early photo of Monte Casino chapel located on the Covington hillside. The stained glass transom is still in place above the doorway.

Thomas More College’s Crestview Hills campus is home to a little gem of architectural beauty that long resided in the hills above Highland Pike in southern Covington, Ky. Monte Casino Chapel was built in 1878 by two Benedictine monks who were members of the Monte Casino Monastery. The Chapel was nestled among the fields of grapes for 43 years before Villa Madonna College opened its doors to students.

The Chapel was built to provide a quiet place for prayer and meditation. Located in the beautiful vineyards the monks worked to make altar and table wines, the chapel was made of fieldstone and measured just 6’x9’ with several small stained glass windows. It was dedicated to Mary, the Mother of Jesus, under the title the “Sorrowful Mother” with a statue of Mary holding the body of Jesus (the Pieta) as the centerpiece.

The Monastery thrived until the Prohibition era at which time the winery that sustained them became unprofitable. Monte Casino closed in 1918 with the last monks leaving in 1923, but not before the Chapel achieved worldwide fame in 1922 when Ripley’s Believe It or Not dubbed it the “smallest church in the world.” The property was leased to the Burkhart family for the next 34 years, and the little chapel fell into disrepair.

Working to break the church loose from its footings and jacking it up high enough to fit the drag underneath.

In 1957, Fred Riedinger bought the property and retained ownership of the Chapel after selling the majority of the land to a housing developer. Riedinger donated the little Chapel to Villa Madonna College in memory of his deceased mother, Alma, in the mid-1960s. The College was preparing to relocate out of the city, having purchased land in Crestview Hills, Ky., and plans to move the little church from Covington to the new campus were required. Friend of the College, Matth. Toebben, was instrumental in that move. I sat down with Matth. on a Thursday morning to learn how he became involved in this project.

“I was a member of the Knights of Columbus,” Matth. says, “and they called me one day and asked if I could take a look at this church up on a Covington hill and (decide) if it could be moved. They would pay $1,200.” Matth. went down to determine the complexity of the job and immediately fell in love with the craftsmanship of the little church, “I was amazed at how much detail, how much hand-craft it took to chisel those stones to the shape that they were in. It took a tremendous amount of hand work that the monks put into building that church.” It became a personal mission to preserve this tiny place of worship, this little piece of history that spoke to the exquisite craftsmanship of its builders, Father Otto Kopf and Brother Albert Soltis.

There was less than a foot on either side as the drag maneuvered the little church between houses and out to the roadway.

Moving the 90-ton stone structure was not a simple task. Nestled between homes, Matth., and his cousin, Rudy Pohlaben, had to work up a plan of action for the relocation effort. An immediate challenge was the inability to dismantle the Chapel to move it in pieces. The mortar holding the church together was so hard they could not get the stones apart. Back to the drawing board they went. It occurred to Matth. that if they found a large enough drag they could take the entire building in one trip. He and his men began working to break the church loose from its footings as he searched for a drag. The process took about two weeks and required jacking the building high enough to fit the large drag under it. As the first drag moved into position, it was evident that it was not large enough. Matth. had to search for an even larger drag, which was brought in from Cleveland, Ohio, to accomplish the job. Moving the chapel between the existing homes was the next challenge. There was only about a foot of room on each side of the drag as the men began maneuvering to squeeze the stone structure out to the roadway. The sheer weight of the load could have created issues for foundations. A temporary roadway of white oak boards was built between the homes to help absorb the weight, and Matth. took out extra insurance as a precautionary measure. As the drag moved past the first house, a stone driveway retaining wall gave way from the weight of the load.

People gathered all along the roadway as the journey from Covington to Crestview Hills progressed. National and local media covered the event.

The drag with the little church made it to the street with no other mishaps and the procession from Covington to Crestview Hills began. Representatives from the telephone and electric company were on hand to clamber up and manually move wires in areas where the top of the church would have ensnared the low-hanging utilities. Up the hill to Dixie Highway they traveled, people coming out all along the way to see the oddity of the little church being towed through the streets on that Saturday afternoon. Both local and national news coverage was focused on the effort and four hours later, the chapel arrived in Crestview Hills with the new footings that Matth. had poured waiting to welcome it to its new home. Amazingly, as news coverage spread, items that had gone missing from the little church during the earlier years of neglect were returned. After undergoing work to restore it more closely to its original condition, the little chapel was rededicated on Sept. 12, 1971.

The effort, time, and dedication involved in this project went far beyond the original $1,200 stipend the Knights of Columbus offered. Matth. had only been in the United States for a little more than 10 years at the time the chapel was moved, having come from Germany as a young man in the ’50s to find his fortune. When asked why he stuck with this project, he responded, “It was important to me because of the craftsmanship, the time that those monks spent to chisel each stone so it would fit, like the window sills and the arches – you can’t replace that today.” Monte Casino Chapel is a reminder of the tranquil serenity of a bygone time. It stands today at the corner of Thomas More Parkway and Turkeyfoot Road with its door facing Thomas More College in large part because of the dedication and effort of College friend, Matth. Toebben.

← TMC 2017 Scholarship Golf Outing a Success!
A Grand Celebration – 50 Years in the Making →