For questions or to submit a story idea, contact Judy Crist at 859-344-3443.
Browse: Home   /   Campus / Student News   /   Pursuing the Right to Religious Liberty and/or Religious Freedom 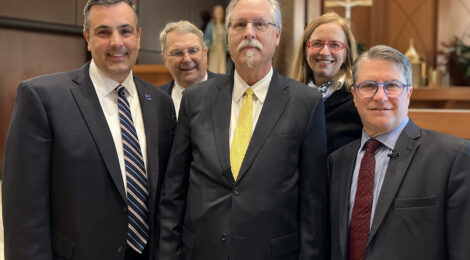 Pursuing the Right to Religious Liberty and/or Religious Freedom

Deneen touched on the issue that religious liberty presents in the political arena and the complexities it creates. His talk incorporated how in antiquity the belief in the “city’s” religion was not separated from the political. There was no expectation that the individual could have a different belief than that of the civilization or city in which they were an inhabitant. Deneen outlined this concept in detail using Athens of ancient Greece and Rome as examples. He then continued to cover how this same ideal was present in other forms throughout the ages even being experienced by St. Thomas More in the England of Henry VIII. Deneen than approached the modern day political environment and the idea that we are trying to maintain two “cities,” as we tolerate people of different religious values within the same governmental system. Is it possible to successfully maintain that type of environment? Deneen, Schindler, and Spence then spoke to some of the nuances that must be considered in this balancing act.

The IRL is now in its seventh year and encourages thought and dialogue surrounding the constitutional privilege and right to freely worship and practice religion as an unalienable right. It accomplishes this mission through education and conversation in the form of academic symposia and lectures featuring internationally renowned speakers. The Institute is led by Executive Director Raymond G. Hebert, Ph.D., a practiced expert in history and higher education, now in his 47th year at the University.

Thomas More President Joseph L. Chillo, LP.D. explains the importance hosting these types of events has for the University’s students, “The William T. Robinson Institute for Religious Liberty exemplifies the very best in liberal arts education, and the importance of understanding the differences that make up our world and our communities. These differences should unite us, rather than divide us, in the pursuit of truth as an enduring quality of the values we hold dear.”

For those who could not attend in person, it is possible to view a recording of the event at tmuky.us/22irldeneen. For more information about the IRL visit: www.thomasmore.edu/religiousliberty.