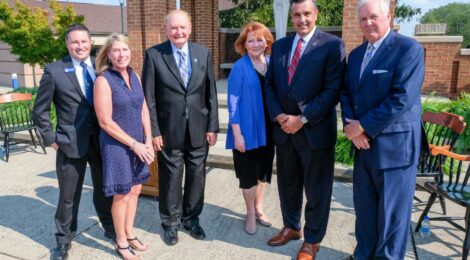 The strategic plan, Lighting the Way, will serve as a blueprint for the next five years, outlining goals and aspirations that will lead the University into a future of transformation and growth.  Rooted in mission, values, and vision, the plan sets forth an ambitious agenda for students, community, and the institution.  The initial phases include campus growth with the addition of a new 33,150 square foot, four-story, $14 million Academic Center.  The new Academic Center will house the College of Business; Center for Leadership, Entrepreneurship, & Innovation; Wm. T. (Bill) Robinson III ’67 Institution for Religious Liberty; and The Center for Faith, Mission, and Catholic Education.  Further capital improvements will include transitioning The Saints Center back to its original designation as a student union, transforming it again into the gathering center for the campus and the community.  Modifications to the Benedictine Library will integrate the Success Center under the same roof, creating a highly advanced, contemporary learning commons.

Another activation of the strategic plan includes the University’s application towards NCAA Division II status, an opportunity to bolster the University’s athletic program.  In early August 2021, the Great Midwest Athletic Conference unanimously approved a provisional membership for Thomas More University.  The athletic department will implement improvements including facility upgrades to the Republic Bank Field at Griffin Plaza (host to seven collegiate sports) and initiation of a new baseball, softball and intramual field and state-of-the-art stadium complex.

Lighting the Way, the strategic plan, incorporates the combination of facility growth and campus enhancements to provide University students additional opportunities for growth and prosperity.  Ultimately, the goal of Thomas More University is to deliver a superior educational experience with a Catholic framework of integrity, mission and faith.

“Today it’s time for MORE.  As we begin our second century from a position of growth and strength, it is only right that we move forward with a bold and ambitious strategic plan centered on student success, academic innovation and responsible stewardship,” stated President Chillo.  “Furthermore with support of the Second Century Campaign we are on the path towards a future of continued growth and prosperity.”

Bob Sathe and Melissa Lueke; both former Board of Trustees Chairs at Thomas More University chair the $30 million Second Century Campaign. The campaign is also served by honorary chair Will Ziegler, a ’53 graduate of Villa Madonna College.  Dr. Judith Marlowe ’69 is the chair of the Board of Trustees.  Dr. Marlowe’s ties to the University include being class president during the move of the University from Covington, Kentucky to its current residence in Crestview Hills, Kentucky.  Dr. Marlowe remarked, “…I’ve been involved with every significant event in Thomas More University’s history, aside from its founding, and I am looking forward to another century of milestones.”  The campaign goal of raising $30 million is the largest endeavor in the University’s history.  President Chillo related that during the quiet period of the campaign’s development and in advance of the campaign’s public announcement, the University secured over $15.7 million toward the goal of $30 million.  All members of the Board of Trustees, over sixty major gift donors, and thirty individuals have enrolled in the Centennial Society (pledging $1,921 a year over five years), enabling the Second Century Campaign to launch with unprecedented support.  To date, benefits from these donations alone account for twelve new endowment scholarships, marking these financial levels the highest ever achieved for the institution.

Thomas More University’s Centennial Celebration honors the continued growth of the University.  The recent 2021 admission numbers for the University continue the three-year trend of record-breaking traditional student enrollment.  Again, the University’s numbers outshining the 3.5% decline in national secondary education enrollment statistics according to the National Student Clearinghouse Research Center (NSCRC).  Thomas More University ranked number one among Kentucky’s private and public colleges and universities for long-term gain and overall return on investment according to a 2019 study by Georgetown University.  The institution annually ranks in U.S. News and World Report as one of the best regional educational institutions in the southern United States.  Thomas More University earned a perfect score on the US Department of Education’s Financial Composite Report and again received full accreditation by the Southern Association of Colleges and Schools (SACS) for the quality and integrity of the educational institution.

“By harnessing the transformational power of education, the ultimate goal of Thomas More University is to exponentially build upon the pillars of success achieved in the previous century, continue the tradition of a Catholic, values-based education and provide a future of success for our students, community and the world as a whole,” stated President Chillo.  “…with the security of our Second Century Campaign and the guidance of our strategic plan Lighting the Way, Thomas More University will indeed be illuminating the future.”

You can view the announcement by President Chillo here:

For additional information and to donate to the Second Century Campaign visit: https://www.thomasmore100.com/second-century-campaign