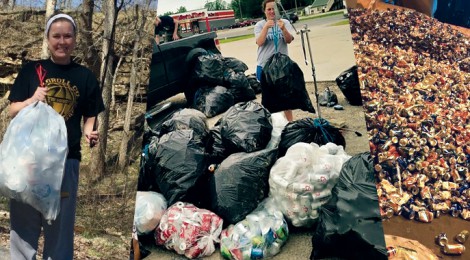 A One Woman Difference Maker

For the last three years, I have been fortunate to have Hannah Devine as my work study assistant. Hannah is rather quiet and modest, so I have learned of her many accomplishments by happenstance or inquiry. She is working to graduate with a double major in biology and psychology, and a minor in pre-law. She is also a member of the women’s basketball team that won the 2015 and 2016 Division III National Championships. For the past two years, she has presented her research on stress and its relationship to coping strategies and physiological responses at the Mid-American Undergraduate Psychology Research Conference at Franklin and Earlham Colleges in Indiana.

Recently, I learned that she has established a foundation in her hometown of Carrollton, Ky., to raise scholarship funds for seniors in the Carroll County Public Schools who plan to go on to college. Her goal is to raise enough money to award two $1,000 scholarships at the end of the school year. To date, her foundation has earned $1,300. If I had not asked why she wanted the aluminum cans we collect in our department, I might not have learned about her involvement in such a worthy cause.

Hannah came up with the scholarship idea over winter break 2015, when she was thinking about what she could do over her summer break that would be service oriented. She recalled how she had raised $400 collecting aluminum cans to win a $500 scholarship the summer before she started college and devised a plan to raise the funds in a similar manner. She says, “I started this scholarship as a means of giving back to my hometown, especially the youth. I understand the financial struggles of paying for college, so I wanted to be able to provide the students of Carrollton with the opportunity of furthering their education.”

Weighing bags of aluminum cans dropped off by the truck load at the drop-off center.

Using Facebook and fliers, Hannah implemented a community-wide team competition involving categories of competitors: families and small groups of individuals, community organizations, and businesses. Each category competes over the course of the school year to collect the most aluminum cans. There is a once-a-month drop-off site for the cans the teams collect at the Carrollton Farmer’s Market where participants can register for a monthly raffle with prizes that are supplied by local businesses. If, for some reason, Hannah cannot collect at the designated time, the Carrollton News Democrat announces the new date and time. Non-competing participants are also encouraged to drop-off cans at the site and register for the raffle. Hannah estimates that between 300 and 400 pounds of cans are collected each month and then taken to Florence, Ky., to be weighed and is compensated at 40 cents per pound.

Since there was so much enthusiasm about her project, Hannah started the competition in January 2016 rather than waiting for summer break. The first school-year-long competition began in September and runs through May 2017. She now has a website (tmcky.us/tmcrecycle) where team competitors and volunteers can sign-up and the scholarship application requirements are posted. The Mission Statement reads, “Through this service event, we hope to positively impact students, families, organizations, and businesses through recycling for a greater cause…We hope to make Carrollton a greener place, while promoting academia and service for people of all ages.” Because Hannah partnered with the Carroll County Parks and Recreation Program to promote the scholarship, the application title reads, “Carroll County Recycling Project and Parks & Recreation Scholarship.” As part of their collaboration, the CCPR has agreed to install recycling bins around the sports fields and Hannah periodically organizes road side clean-ups with high school students.

There is one more way Hannah involved the community in her service project. She initiated an annual competition that takes place one week in April between the public schools of Carroll County, dubbed “Recycling Week.” Students of the winning school are treated to a Popsicle party and presented with a trophy. Hannah said the first event was a great success, noting the younger kids were particularly “pumped up” and liked the idea of competing with the older kids. She says, “There were nearly 500 pounds of cans collected throughout the week among the schools. The kids’ families were bringing in truckloads on some occasions. It was awesome to see.”

Hannah is truly an inspiration to us all. She has shown how one person with little resources and time, but with ingenuity and a desire to make others’ lives better, can put in motion a set of events that bring the community together in pursuit of a common cause that ultimately makes the community a better place to live and helps individuals to fulfill their dreams. Hannah sent out surveys to the community for feedback on her projects. One response could not have been more apt, “Thank you for making our community a better and cleaner place! You are making a difference and bringing the community together just through collecting cans.” As for Hannah, this is her senior year at TMC. She plans to pursue a law degree and possibly work in the juvenile courts or as a family lawyer, just what you might expect from someone who has so much compassion for her community.