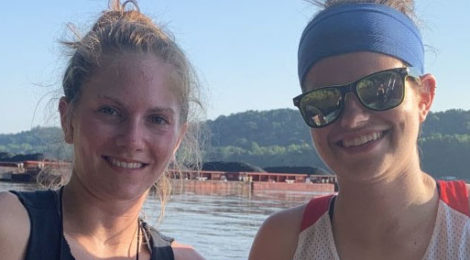 A Day in the Life of River Crew

Among the four crews at the Thomas More University Biology Field Station, the River Crew was on the water the most. The River Crew’s mission is to perform a bioassessment of the fish populations in the Ohio River near Beckjord and Zimmer power plants. This project has been ongoing since 1971 and examines long-term trends in water quality and fish population. The goals of this project are to determine any impacts the powerplants have on the Ohio River ecosystem. Fish are great indicators of the river’s health as some species are more sensitive to pollution than others.

In addition to collecting fish, the River Crew measures the pH, temperature, dissolved oxygen, and conductivity of the Ohio River using a Ysi probe. The turbidity of the water is also measured using a Secchi disk.

The crew uses three main methods to collect fish: hoop nets, gill nets, and electrofishing. By using a variety of methods, a greater abundance and greater diversity of fish can be sampled and analyzed. Hoop nets consist of rings that consecutively get smaller; this traps the fish. The gill net used by the River Crew is 125 inches long. Unlike the hoop net that is anchored to the bottom of the river, the gill net floats along the surface. Electrofishing is the most effective method when it comes to catching fish. It is usually conducted at night and operates by sending an electric current through the water which temporarily stuns the fish. Fish that are caught are measured for their total length, standard length, and mass. Then the fish are either put back into the river or kept for educational purposes.

Jonathan Frommeyer   Jonathan is a rising senior at TMU and a biology major. He has spent the past three years at the Field Station and each year he leaves with more experience than before. Besides working at the Field Station, Jonathan is the president of Tri-Beta (the biology honor society), the secretary of the Marine Biology Club, a member of the Blue and Green Club, and is a lab technician on campus. His time at the Field Station has helped prepare him for a future in graduate school. Jonathan stated, “The Field Station has helped prepare me for the future by introducing me to new people, attending the weekly seminars, and taking part in the field trips.” In addition to being a part of the River Crew, Jonathan was also a high school STEM (science, technology, engineering, mathematics) camp mentor. STEM camp consists of a group of high school students that stay at the Field Station for a week and take various STEM-related classes

Kelli is a senior at Ohio Northern University and plans to major in environmental and field biology. She also plays lacrosse for ONU. Kelli explained, “In the future, I would like to do some sort of field work. The Field Station has helped me get hands-on experience with the career I wish to pursue in my future.” Kelli’s time at the Field Station hasn’t been all work; she also bonded with amazing people.

Morgan is a rising senior at Frostburg State University in Maryland and plans to major in fisheries biology. She is involved in many clubs at her university, and serves as president of the university’s Fishing Club and is the secretary of the Wildlife Society Club. Not being from the area, Morgan was surprised by the diversity of life in the Ohio River. She exclaimed, “Seeing a three-foot sucker fish was surprising!” Morgan also gained a lot of knowledge from the weekly seminars held at the Field Station over the summer.

Madi, an upcoming junior at the University of Kentucky, plans to major in environmental and sustainability studies. She is involved in many organizations at her university such as the Student Sustainability Council, the Lexington Environmental Youth Outreach Program, and is a member of Delta Gamma. Like Jonathan, Madi was also a high school STEM camp mentor. Madi stated, “Working with the kids during STEM camp was one of the most influential experiences I’ve had; I hope the kids feel the same way.” During Madi’s time at the Field Station, she came to the realization that she wants to work outside, either with aquatic or marine ecosystems.

After analyzing the data gathered throughout the summer field season, the River Crew came to the conclusion that the River meets water quality standards. These conclusions were reached because of the abundant, diverse fish assemblage, and the supporting water quality. Neither of the power plants has a significant impact on the river’s ecosystem.