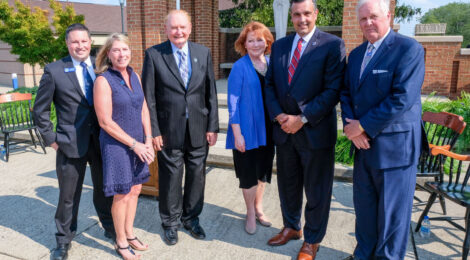 CRESTVIEW HILLS, Ky. (Dec. 16, 2021) — The month of December has brought astounding progress at Thomas More University as the Second Century Campaign: It’s Time for More hit the $20 million mark toward its goal of raising $30 million over the next five years to support student success and academic innovation. Community members and alumni stepped up to support the new strategic plan, Lighting the Way, implemented by Thomas More, to ensure the University’s goal to expand its footprint and continue its impact on the region.

“The support we are seeing for our Second Century Campaign is nothing short of extraordinary,” says Thomas More University President Joseph L. Chillo, LP.D. “Alumni and friends of the University want to pay it forward and see future students benefiting from a high-quality, Catholic liberal arts education. They know with certainty that current and future graduates of Thomas More will emerge as civic leaders and responsible stewards, well-equipped to affect positive change in the community. Surpassing the halfway mark of a five-year capital campaign goal in just a few months after its launch, testifies to the strength of our strategic plan, Lighting the Way, and the faith that our community has in the ability of Thomas More to provide students with an innovative and transformative educational experience.”

Thomas More launched the public phase of the capital campaign in fall of 2021, setting benchmarks that positioned the effort as the most ambitious fundraising campaign in University history. This campaign seeks to support the goals of the five-year strategic plan with a focus to accelerate campus investments, solidify new financial partnerships, and institute innovative academic opportunities with the ultimate vision of elevating Thomas More University’s visibility and stature in the global community as the region’s premier Catholic university.

The recent success of GivingTuesday, an international movement with the goal of uniting the whole world through a celebration of generosity, saw an outpouring of community support for Thomas More with 111 patrons donating a total of $117,645 to the University. The Thomas More University Board of Trustees graciously agreed to match dollar-for-dollar up to $100,000 in donations received in support of GivingTuesday. This brought the total raised to an astonishing $217,645.

Funds raised as part of the Second Century Campaign are already having a major impact at the University. Wilbert L. and Ellen Hackman Ziegler made possible the University’s first endowed chair, currently held by Reverend Monsignor Gerald E. Twaddell, Ph.D. Gifts have enabled the creation of 19 new endowed scholarships, such as the one from Board of Trustee’s Chair Judith A. Marlowe ’69, Ph.D., establishing the Leadership & Service Award, and Evelyn’s Opportunity Scholarship, in honor of her late mother.