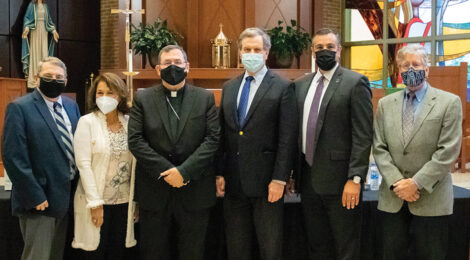 CRESTVIEW HILLS, Ky. (Oct. 21, 2021) — The Wm. T. (Bill) Robinson III ’67 Institute for Religious Liberty (IRL) hosted an interfaith event on Oct. 19, 2021, entitled “A Frontline Perspective from a Lifelong Jewish Activist.” Keynote speaker David Harris is the CEO of the American Jewish Committee and has garnered international attention throughout his career, being dubbed by the late Israeli President Shimon Peres as the “foreign minister of the Jewish people.” Joining Harris were guest commentators Shakila Ahmad from the Islamic Center of Greater Cincinnati and James P. Buchanan, Ph.D., former Director of the Brueggeman Center for Dialogue at Xavier University.

“As we celebrate our centennial this year, it gives us reason to pause and to celebrate our history and tradition,” said University President Joseph L. Chillo, LP.D. “The William T. Robinson Institute for Religious Liberty exemplifies the very best in liberal arts education, and the importance of understanding the differences that make up our world and our communities. These differences should unite us, rather than divide us, in the pursuit of truth as an enduring quality of the values we hold dear.”

Harris spoke of his history as a Jewish activist, which began early in his adult life. This personal journey was influenced by the plight of both his parents who survived the Holocaust while living in Europe during World War II. The conversation included questions covering anti-Semitism, hate crimes against all segments of society, the influence social media has as propaganda today, and the hope there is when people from diverse religious backgrounds can come together and work towards a better future.

Headed by Executive Director Raymond G. Hebert, Ph.D., the IRL, now in its sixth year, encourages thought and dialogue surrounding the constitutional privilege and right to freely worship and practice religion as an unalienable right. It accomplishes this mission through education and conversation in the form of academic symposia and lectures featuring internationally renowned speakers.

For those who could not attend in person, it is possible to view a recording of the event through the Thomas More University YouTube channel: https://youtu.be/HCuKbZHxKbk. For more information about the IRL visit: www.thomasmore.edu/religiousliberty