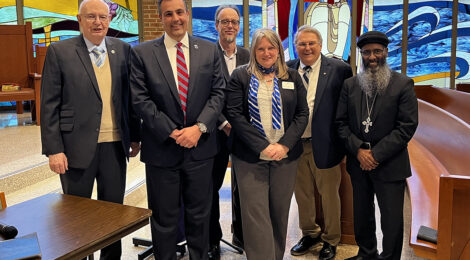 “The William T. Robinson Institute for Religious Liberty presents our community with important opportunities to gain knowledge through experienced perspectives that uphold the practice of academic and religious freedom,” says University President Joseph L. Chillo, LP.D. “These panelists not only offer unique messages into the strength found in collaboration, but also the importance of working to bridge the divide between ourselves and others to make justice and peace a reality.”

The subject broached by this panel is timely in light of current events taking place between the Ukraine and Russia. Panelists all serve refugees in unique ways. Koehlinger represents Kentucky’s largest refugee resettlement agency, where he secures housing and medical care for new arrivals and provides them with comprehensive case management, including employment services, ESL, cultural orientation, and specialized programs.

Caffrey is a long-time volunteer who breaks down the language barrier for many Spanish speaking refugees in the in Nashville, Tennessee area, facilitating communication between patient and provider at Siloam Health. He also translates written documents and trains new medical interpreters. Previous to his volunteer efforts, Caffrey had a 30 year career in the United States Air Force with 15 years spent in Latin America.

Fr. Ghebreab not only serves as a parish priest but is also director of external relations for the Canonical Eritrean Orthodox Church in Diaspora under the imprisoned Patriarch, Abune Antonios and His Holiness’s designated bishop, His Grace Abba Mekarios. The Diaspora Diocese includes all of North America, Europe, and the Middle East. Ghebrab was the first person to arrive in the Cincinnati area from Eritrea, a small country in Africa, which has been embroiled in conflict for decades. He has been essential to building a community for others that have followed in his footsteps that is centered around their religious practice as members of the Christian Orthodox Church.

All three panelist spoke to the difference between immigrants and refugees, and the misconceptions that are held by many people in the U.S., with the most prevalent being that the majority are criminals or “lazy,” wanting to be supported by tax dollars at the expense of U.S. citizens. Caffrey spoke to the fact that over 25% of the U.S. population – a full quarter – are immigrants/refugees and their children. This is an incredibly valuable population in terms of a potential work force and the expansion of variety and diversity within the country’s racial and ethnic footprint as a whole. A couple of the largest barrier the three panelist have seen are learned behaviors that mean different things in different cultures and the inability to communicate due to language. All three agreed that the need for volunteers to help with the transition to life in the U.S. is paramount to the success of these new comers as they learn a new way of life.

Headed by Executive Director Raymond G. Hebert, Ph.D., the IRL, now in its sixth year, encourages thought and dialogue surrounding the constitutional privilege and right to freely worship and practice religion as an unalienable right. The Institute accomplishes this mission through education and conversation in the form of academic symposia and lectures featuring internationally renowned speakers.

For those who could not attend in person, it is possible to view a recording of the event through the Thomas More University YouTube channel: https://www.youtube.com/watch?v=QsJX_1VlJSw. For more information about the IRL visit: www.thomasmore.edu/religiousliberty. To watch a video of the event, visit: tmuky.us/22irl0407panel.