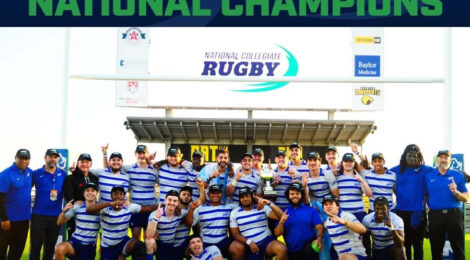 “When we recruit players for our team, we ask them what they want their legacy to be,” says men’s rugby head coach John Fox. “Our legacy at Thomas More for the Saints rugby team is to make a difference, whether it’s on the field, in the classroom, or in the community. We are a team of scholar athletes. And we don’t look at ourselves as a team, but as a family.”

Graduate student Matias Caramuti of Argentina helped guide the team to victory, converting three field goals and one extra point attempt, accounting for 10 of the Saints 21 points. First-year student Bautista Saint Bonnet of Buenos Aires also gave a standout performance, being awarded the National Championship MVP after the final. This win concludes a successful season for the Thomas More Rugby program, falling only one time in 2021 to Division I powerhouse, University of Kentucky.

Coach Fox recognized the advantage held by Adrian College, being ranked number one in the league and having a roster of larger players but knew this was a challenge his team was ready to face. “We were the underdog,” says Fox, “but we’re a team that can adapt. And in adapting we changed our whole game plan in the game to come out victors. To secure this win, we did all the little things that were needed to succeed, and again it comes back to making a difference. The guys never gave up. They thought it was their legacy to win this game. They wanted to prove their legacy to do something for the University, and to make sure that we get Thomas More on the map. I think they were very successful in that.”

“This win is a huge victory for our rugby program,” says Thomas More Athletic Director Terry Connor. “Taking the NCRA Division II National Championship title is the perfect ending to an outstanding year for the team; a true testament to the hard work and dedication they have put forward. The rugby team has exemplified the passion and commitment to excellence that we strive for as Thomas More University Saints.”

In August of this year, Alejandro Torres made Thomas More University rugby history as the 5’11” sophomore from Argentina was recruited in the second round of the Major League Rugby draft. Torres etches his name as one of the few Thomas More athletes to be drafted by a professional sports organization and the first within the rugby program.

The rugby team returns to the field next Spring to take part in Sevens Rugby.