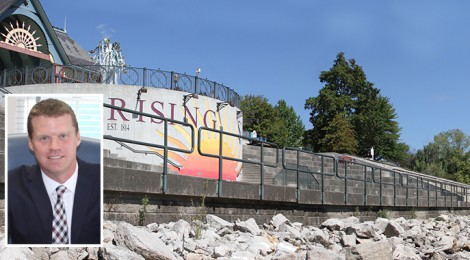 Mayor Brent Bascom – A Man with a Plan

Brent Bascom, MBA class of 2012, credits his TMC education with giving him the confidence to run (successfully) for mayor of Rising Sun, Ind., in 2015.

How do you judge the value a person places on furthering their education? For most, it’s the obstacles they overcome to obtain it; for Brent Bascom, MBA class of 2012, it’s foregoing his honeymoon to start classes at TMC. True story. Bascom, now the Mayor of Rising Sun, Ind., started classes in the TAP program the Monday after his wedding. Hawaii has nothing over Crestview Hills!

Growing up in Lawrenceburg, Ind., Bascom received a Bachelor of Arts, majoring in Liberal Studies, in 2007 from Northern Kentucky University. He was working in a Mason, Ohio, call center for a large regional bank when he decided he needed better ‘tools.’ He knew that earning an MBA was the best way to grow professionally and become a more attractive candidate in an extremely competitive job market.

Bascom followed his sister Erin to Thomas More College. Erin was already on her way to earning a BBA, which she completed in 2013. “I found the (MBA) program to be flexible and fascinating (with) how it was constructed. It wasn’t built on burying your face in textbooks. It allowed students to build on their life experiences and learn from their peers,” Bascom says. The program was the perfect fit. “I liked how the curriculum was tailored to build on your professional work experiences.” Bascom continues, “It strengthened my analytical skills and provided me a window to look at real life work challenges within a different lens.”

The ability to learn with and from professionals from so many divergent backgrounds was key, according to Bascom, “You look around and see how different everyone’s work experiences may have been but how similar our paths were.” Bascom continues, “We all chose Thomas More because we wanted a new challenge. We wanted to be better prepared participants in the work force. We wanted the training to become better adapted in our industries.”

Bascom credits his Thomas More College MBA as giving him the confidence to try something different, like running for mayor, which was his first venture into public office. Since winning the election in 2015, Bascom now relies on his MBA to help him manage the challenges of small town government. “It gave me a skill set that is unique. It pushed me to think through problems on a more macro level. Prior to this opportunity, I had the tendency to just think about how things affected my work or how it might affect my department. Now, when a challenge arises, I think about how it will affect my employer, how does a competitor address this, or how can we separate ourselves from our competition,” he says.

Bascom is married to Gina, his wife of seven years, and has two lovely children, Mason (seven years old) and Megan (four years old). In his “day-job,” he works as a mortgage underwriter at a local bank. As he looks to his future he remembers fondly his time at Thomas More College, “This program has given me so much that I may never be able to repay that debt. I’m a better husband, a better father, and a better work colleague all because of this rigorous program. Make no mistake; it wasn’t easy. It was mentally, physically, and emotionally exhausting. Sometimes through the exhaustion you would wonder if it was going to be worth it. Then you’ll have a work challenge where you lead, where you are decisive, and feel others looking up to you. It’s at those points I recognize all my sacrifices to get through the TAP program were worth it tenfold.”