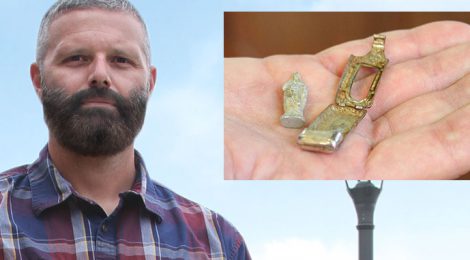 The complexities of what a person lives, becomes more evident as time passes. Everyone has a story to tell, some take the form of a memoir, some a diary, some even a novel; it can be written as fact or take on the form of fiction. For Chris Collins ’98, the form is poetry and prose that comes from his heart. He chose to take his experiences as a soldier, having completed three combat tours as a soldier in the U.S. Army Reserve in Afghanistan and Iraq, and produce a collection of poetry inspired by family and war. The collection, entitled My American Night, creates a catharsis of emotions as the reader is drawn into his personal journey through the human destruction of war.

Chris’ first recollection of involvement with writing goes way back to second grade, when a short story he wrote was published in the parish bulletin. He doesn’t remember much about why he wrote the piece, it had something to do with a cat and mouse (a Tom and Jerry influence perhaps?). His first introduction to poetry, though, was two years later as a detention assignment in the fourth grade assigned by the school Principal. As a result of a “meat revolt” he led against mettwurst for lunch, he was required to memorize and recite Shakespeare’s Sonnet 18. Thus began a love for the juxtaposition of words, their sonic mechanisms, an affinity for the rhythm and rhyme as the words were spoken. A seed was planted. Chris can still recite Sonnet 18, that one-hour detention sticking with him to this day.

In those early years, he always liked writing, but was not one to sit down for leisure and scratch out a few lines. Chris was not encouraged to write other than for the occasional school assignment. The turning point came at Thomas More College in fall 1995 when he took English 255: Special Topics Creative Writing with Fr. Murray Bodo, a member of the Franciscan Priesthood. Chris says, “I took Father Murray’s class and he was the first person that ever said, ‘You know you’re a pretty good writer, have you thought about writing?” Chris took three more workshops with Fr. Murray, who encouraged and pushed him, providing the one-on-one mentoring necessary to hone his craft.

Chris credits the dedicated faculty and his academic experience at TMC with the direction his life has taken – finishing his undergraduate degree in English (Chris was a transfer student), going on to complete two master’s degrees, his calling to be an English teacher, becoming an officer in the military, and now working towards a doctorate in Creative Writing at the University of Cincinnati. Chris says, “At Thomas More, it’s really the faculty that make the difference. If you’ve gone to a different university, you’d realize how lucky you have it being [at TMC] because the faculty are always here to help you. You’re not making an appointment for a 20-minute window to meet a professor. At Thomas More, I could always knock on the door and the professor was there.” This was a blessing for Chris, who was employed full-time to pay tuition while attending school. As a first-generation college student, there was little time for other activities outside of school and work as he pushed towards graduation. In reflecting on his undergraduate experience, Chris shares that just as Fr. Murray inspired him to be a writer, Mr. Joe Connolly taught him how to analyze and to criticize his own work. “Professor Connolly was exceptional at literary analysis. He helped me see literary works in such different perspectives. He taught me how to take a work and to slowly pick it apart from different angles. He made me a better writer and a better observer of literature. To be a good writer you have to be able to take a step back and be self critical of your work.” As a result, Chris won TMC’s Dr. Sandra L. Cuni Literary Award in 1998, just one indication of great things to come. Ironically, the poem that won the contest was entitled, The Veteran. That poem still haunts him today.

The desire to serve his country was always present for Chris. Upon graduation in 1998, he enlisted in the Army Reserves. The first couple years were simple enough but then the tragedy of 9/11 struck, and the role of Army Reservists changed. During the ensuing War on Terror, his commitment to both training and service became more concentrated. Deployments were a regular part of life, and Chris was sent overseas to both Afghanistan and Iraq for up to 12 months or more at a time, seeing some of the harshest realities of what the war meant for both U.S. military personnel and the civilian population in those devastated areas. He continued to write while on mission, “I had a notebook that I would write stuff down in, just observations and notes. Some of my poems and nonfiction come out of what I had jotted down during that time.”

A collection of poems was painstakingly crafted from that war-time experience. His service to his country lasted 12 years; developing the content for My American Night took 15 painful years before he felt the poems could be shared. “A lot of my writing deals with the human destruction of war. … When I see the civilian population that is horrifyingly affected by war, especially the children of war, that’s where a lot of my writing is born from. When I saw children killed or eating out of garbage dumps, that’s where a lot of my writing wells up… After I had my own children, it became even harder because, as a father, I was picturing my own children there in that country, there in the faces of those children I saw each and every day. It’s a sickening daymare to witness that.” He still struggles with the “why” of what he experienced. Why was he able to go home when others did not? Why was there so much suffering for the civilian population who was so innocent?

Upon completion, Chris submitted the collection of poetry to several contests he saw advertised by the Association of Writers & Writing Programs (AWP), one being the Georgia Poetry Prize (GPP). Amazingly, the 2017 GPP picked the collection up immediately. Chris says, “I was absolutely floored that they accepted it, … it’s a big press! I’m still kind of awe-struck.” The collection is slated to be published in February 15, 2018 with a review on the cover by Vietnam veteran Bruce Weigl, one of Chris’ favorite writers and author of Song of Napalm.

Chris holds the statue of the Sacred Heart of Jesus that accompanied and protected him during deployments.

It is Chris’ hope that his children, and in the distant future, his grand children, will never be subjected to war-time experiences, whether in service to their country or as civilians. He is still working his way through the complexities of what he experienced in Afghanistan and Iraq, both emotionally and psychologically. His words continue to flow from those repositories. A series of personal essays that deal with work, faith, family, morality, and disability are the current focus of his doctoral dissertation, a second book in progress. These personal essays are called Pocket Medal Elegy, named for a pewter statue of the Sacred Heart of Jesus which Chris carried with him during his deployments. The statue was given to him by his grandfather-in-law, Pasquale (Pat) Giusseppi Ciafardini, who also carried it with him while serving in Guadalcanal during WWII. Both men returned safely home from war. It’s not hard to believe that there is a special purpose for Chris’ writing when the Sacred Heart of Jesus is involved in the journey.

Perhaps the relating of his experiences through poetry and essay, and the healing that comes with it for himself and others, are meant to convince the rest of us, who read his words, that war creates more questions than answers. Is it possible to find another way to accomplish peace? Can we find that way?

Chris’ advice for current TMC writing students: “Do not give up. … You will send stuff out and get rejected, left and right, I have been rejected so many times I could probably wallpaper my den three times over with rejection slips. Who knows what an editor will want? … It took me over forty years to publish my first full-length poetry book. Do Not! GIVE UP.”

For more information about:

← More Than Before: TMC Looks to its Future as a University
Jude Grosser ’76, Bolstering the Citrus Industry →