For questions or to submit a story idea, contact Rebecca Stratton at 859-344-3309.
Browse: Home   /   Water Quality Research Expands at the Biology Field Station 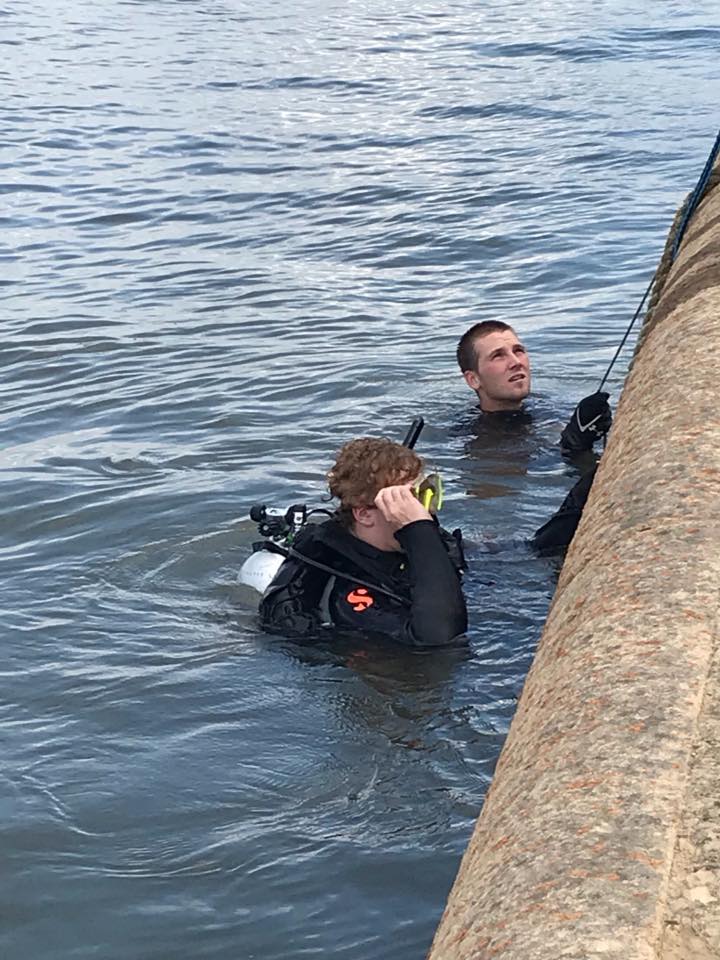 TMU students John Butler and Jake Whitford dive to sample zebra mussels, an invasive species from Europe that arrived in 1994 and has adversely impacted native freshwater mussel species. Both students received SCUBA-certification through a class at TMU introduced in 2017.

Now, more than ever, the Biology Field Station plays a critical role in the assessment and monitoring of the Ohio River, including the protection of the region’s drinking water and the conservation of endangered and threatened species, such as freshwater mussels, as it expands its water quality research. Each year, the Center for Ohio River Research & Education (CORRE) at the Station offers internships to undergraduates, from Thomas More, and across the country, in the fields of aquatic biology, ecology, and environmental science. Over 300 students have benefitted from these unique, experiential learning opportunities and many have gone onto careers in related STEM fields.

The signature research project has been the bioassessment of the Ohio River, beginning in 1971 and involving the collection of fish populations to gauge the health of the ecosystem. These long-term data have documented the status of the River and have also shown consistent trends since the implementation of the Clean Water Act in 1972. The River has improved from a variety of perspectives, as evidenced by five decades of research. Recently, the work at the Station has expanded to include animal husbandry of fish and mussels, two aquaculture facilities, DNA sequencing, and the monitoring of the River for potential Harmful Algal Blooms (HABS), like the one that occurred in 2015.

In a similar fashion, the Station partnered with the Sanitation District No. 1 (SD1) and established the Environmental Academy in 2005. Through this Academy, students assist SD1 biologists with their Illicit Discharge Detection Program and Watershed Management Program. Students work alongside SD1 staff in the field to inventory outfalls, assess habitats and conduct water quality assessments. Recently, scientists from the Boone County Conservation District have participated in the Environmental Academy and offered our students hands-on field experiences in streams throughout Northern Kentucky. 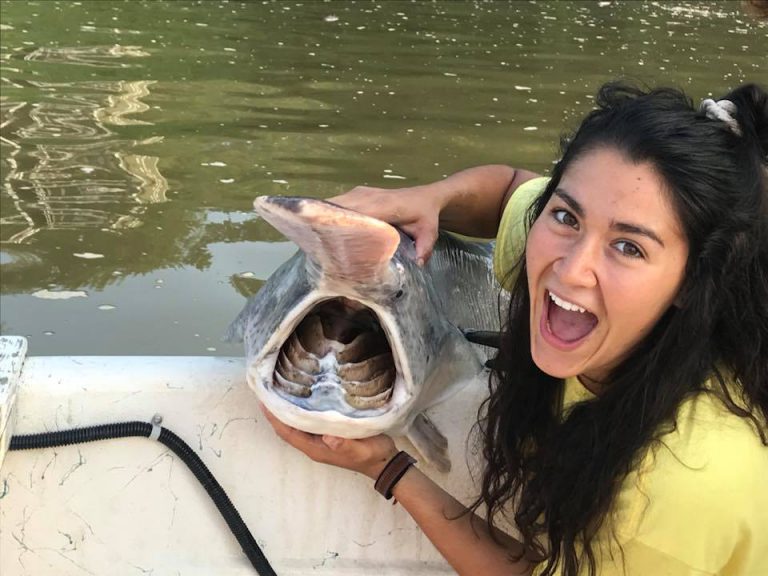 Erin Carrus, summer research intern, does her best paddlefish impression. Paddlefish are a primitive fish species; their recent rise in abundance provides evidence for the improvement in water quality for the River.

Around this time, the research programs expanded to include year-round, laboratory-based science in the fields of aquatic toxicology, chemistry, and aquaculture. The Water Quality Lab at the Field Station houses, a gas chromatograph (GC) donated by Ohio River Valley Water Sanitation Commission (ORSANCO). The GC (supervised by former Dean of the College and chemist, Dr. Dale Myers) is used for monitoring the Ohio River for potential spills and looks for volatile organic chemicals (VOCs), such as the 4 methylcyclohexane methanol, involved in the spill from WV in January 2014. Previously, the Biology Field Station collaborated with Dr. Joel Allen of the United States Environmental Protection Agency on the deployment of a stand-alone, streamside water quality monitoring station (WQMS) incorporating both physical/chemical and biological water quality monitoring technologies with data telemetry, data analysis, and water sampling capabilities on the Ohio River. The very first pilot station is located at the Biology Field Station. This station provides needed information regarding design and other technical issues for streamside WQMSs to be incorporated into later work resulting in a water quality early warning system (EWS) network of WQMSs strategically placed throughout the Ohio River watershed for the protection of source water resources.

Another collaboration with the United States Environmental Protection Agency (USEPA), started in 2009, is the fish aquaculture system that entails the production of fathead minnows (Pimephales promelas), a standard lab organism used in toxicity studies. The adult minnows are bred on site to supply a steady supply of eggs which are hatched and used in measuring the safety of our drinking water and other sources. 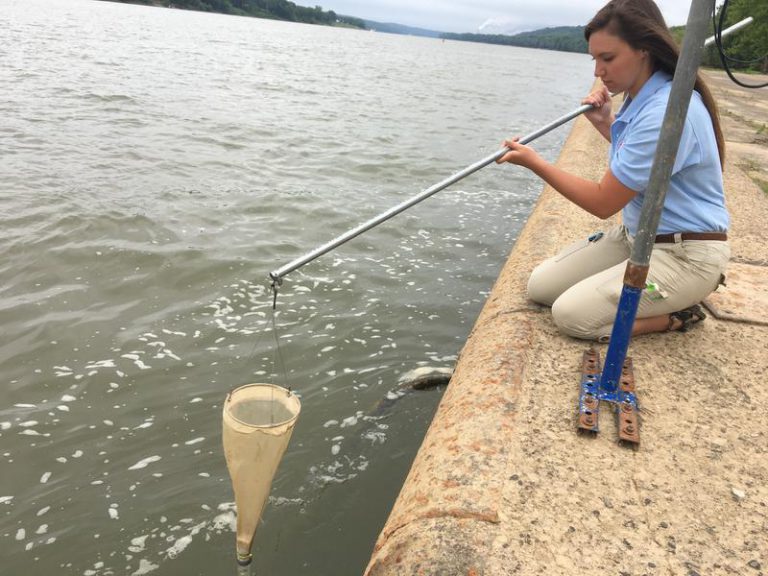 In 2014, the staff at the Station, along with biologists from the Newport Aquarium, installed a system of tanks, utilizing Ohio River water, to provide a refuge for holding adult and juvenile mussels (both non-federally listed and federally listed). The goal is to propagate and culture of federally endangered species which will be used in the recovery of these species in the Ohio River. Freshwater mollusks are arguably North America’s most threatened and endangered group of animals. The Station partnered with the Freshwater Mussel and Conservation Research Center operated by The Ohio State University and Columbus Zoo, the Kentucky Department of Fish and Wildlife Resources, and the Newport Aquarium to understand the basic biology of imperiled mussels and assist in the recovery efforts of threatened/endangered mussel species.

Most recently, the staff and students at the Station have begun monitoring the River for potential harmful algal blooms (i.e. cyanobacteria, also known as blue-green algae). Algal blooms are more common in lakes and reservoirs with warmer temperature, lower oxygen levels and little to no flow. However, in 2015, a harmful algal bloom occurred on the Ohio River, beginning near Huntington, W.Va., and expanding over 600 miles, including the Greater Cincinnati region. This bloom lead to boating, fishing and swimming advisories, as it was deemed unsafe to come in contact with the water during this time, due to toxins released by the algae. The drinking water supply also had the potential for contamination by these toxins. Soon after, the Station joined the efforts of ORSANCO, Northern Kentucky University (NKU), and the USEPA to develop a Harmful Algal Bloom Detection Network that entails taking photos of the River and using an application, developed by a NKU professor and Thomas More alum, Michael Waters ’94, to predict the amount of cyanobacteria in the water, correlate these levels to water conditions and help to prevent another bloom from occurring in the future.

While field stations comprise a range of sizes, biomes, and histories, all serve as crucibles of collaborative learning. The National Academy of Sciences reported in 2014 that field stations play important roles in the scientific community and for the general public, including observation of environmental change; training the next generation of scientists, educators and natural resource professionals; engaging K-12 schools and the public in science and discovery of the natural world; and offering sites to test new technologies and methods. CORRE at the Biology Field Station has become a regional center for research, consulting, government, private industry, environmental education, and community service.