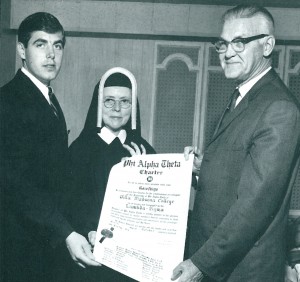 Lambda Sigma Chapter of Phi Alpha Theta is the oldest national honor society at the College. Today the College also has chapters of national honoraries in Biology, Communication, Education, English, Political Science, and Psychology, plus one for students at Catholic colleges. In the mid-1960s Sr. Mary Albert Murphy, SND, a longtime chairperson and developer of the History Department, initiated the effort to apply for a chapter. A Historical Society was formed under the leadership of President Susan Court (1966) and faculty adviser Albert Hamilton. The paperwork they prepared successfully led to the installation of a chapter on Oct. 6, 1966, during a banquet at Town and Country Restaurant (now Barone’s) in Park Hills, Ky. Dr. Lynn Turner, president of the organization and president of Otterbein College in Westerville, Ohio, conducted the ceremony. He won a reputation in Phi Alpha Theta for leadership (several of the organization’s awards are named in his honor) and for witty after-meal speeches. The chapter president at the event was William T. (Bill) Robinson III ’67. All six history professors and eleven of the students were initiated. 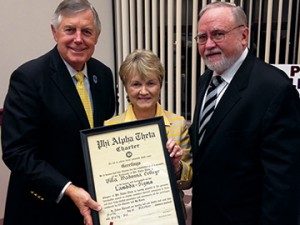 Since that time it has remained an active club. It has won nine Best Chapter Awards from the society in the small college division and several Club of the Year Awards from the College. Members have presented papers at both the national and regional conferences of the organization. The chapter has sponsored field trips, speakers, community service, and a range of other activities. On Wednesday, Oct. 5, it held a 50th Anniversary Celebration at which Robinson, now a nationally prominent lawyer and recent president of the American Bar Association, spoke on the chapter’s history and on Villa Madonna College student life during the mid-1960s.