A sports career for the ages 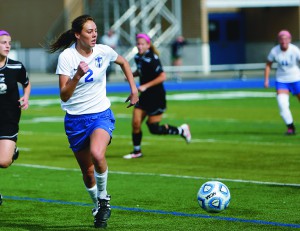 Olivia Huber on the soccer field, intense and competitive describe her approach to sports. Photo by Joe Humphries

Olivia Huber’s Thomas More College athletic career is coming to an end and what a career it has been! Olivia has never lost a PAC conference or tournament game. Ever. In two sports.

As a four-year member of the women’s soccer and women’s basketball teams, she has been part of 203 victories, 16 total PAC championships (eight tournament titles and eight regular season titles), two NCAA Elite Eights and Sweet Sixteens, and two NCAA Final Four appearances including two DIII National Championships. That’s more than 50 victories a year and an incredible 92.7 percent of games in which she has participated (203-11-5 overall). And she has maintained a 3.57 GPA as an elementary education major.

As a soccer forward she was named All PAC four times (three as First Team) and was the 2014 PAC Player of the Year. She holds school and conference records for most career goals, assists, and points, and led all DIII in points and goals (tied) as a junior (89, 36). This season, as a senior, she led DIII women’s basketball in assist-to-turnover ratio at 5.31.

PAC commissioner Joe Onderko put Olivia’s winning ways into perspective, “I would say that what Olivia Huber has accomplished in her four years at Thomas More College is not only unmatched in PAC history, but there are likely few athletes in the history of NCAA Division III that can match her multi-sport resume and accomplishments. As a two-sport student athlete who is succeeding at the highest level of competition while being equally successful in the classroom, she exemplifies what the PAC and NCAA Division III are all about: academic and athletic excellence in a balanced environment.”