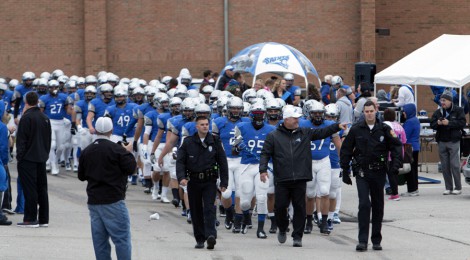 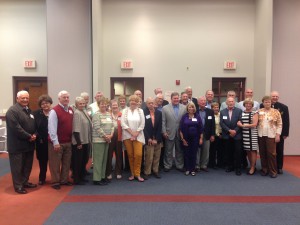 The weather was brisk and the sun nonexistent, but that did not slow down the Saints’ offense at Homecoming this year.  Thomas More racked up 566 yards of total offense on their way to a 49-7 victory over Saint Vincent. Alumni gathered throughout campus to reminisce on their time spent at TMC, enjoy live music and delicious food, enjoy the camaraderie of fellow alumni and cheer the Saints to victory.

On Friday evening, the Class of 1964 celebrated their 50 year anniversary with a reception in Steigerwald Hall. Approximately 20 classmates and spouses attended Friday celebrate and share memories. In addition to this reunion, the football team of 1990 celebrated 25 years of football.

During the football game, several exciting happenings engaged the crowd. Between the first and second quarter, Mercedes-Benz Ft. Mitchell sponsored a “Pass, Punt and Kick” contest where one lucky contestant, Justin Walter, attempted to throw the football for maximum yardage, punt and then make a field goal. Unfortunately, he didn’t achieve the big prize but was awarded one free week’s use of a Mercedes-Benz vehicle.

Between the second and third quarter, representatives from St. Elizabeth Healthcare were brought to the field for an announcement about their sports medicine and athletic training partnership with Thomas More College.