Welcome to the online Moreover!

It is always a pleasure for the Moreover staff to hear from alumni, especially when it reinforces the value of the magazine as a means to stay connected to Thomas More. Issues are mailed twice a year in October and May, while the online version, introduced in summer 2014, is a means to share stories and news more frequently. Below read some wonderful comments alumna Joan Hegge ’61 was kind enough to call with after receiving the spring 2015 issue:

When most people want to voice their opinion about something, it’s usually because they’re unhappy. Not Joan (Higdon) Hegge. 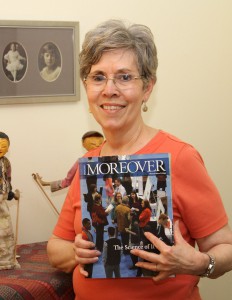 Joan (Higdon) Hegge with her copy of the spring 2015 Moreover

When the 1961 alumna received the recent issue of Moreover in the mail, she was captivated by photos and stories and inspired enough to make a call and share her excitement. She picked up the phone that very day and dialed Tony Roderick, TMC’s director of development. “It was just so bright and full of good pictures. I was very excited because it spoke to me, especially the story about the Benedictine sisters who went to the old Villa Madonna College where I went,” she explained. Joan said she recalls her time at Villa Madonna with fond memories. “I had a wonderful education, and seeing the pictures of the old college brought back so many great memories. I knew some of the nuns who were talked about in the article,” she added.

Joan said that her father, George Higdon, was choral director at Villa Madonna College in the late ’50s and early ’60s, which enabled her family to better afford sending both her and her sister, Judy (Higden) Egan ’58 to VMC. She came from a big family and she and Judy worked their way through college. When she read the story about Dr. Ken Billman ’55 in the spring 2015 issue, she was excited to learn about his career and success because Judy had gone to college with Ken’s sister. Once again, Joan felt a connection. “I love all the stories about the different alumni. The whole magazine inspired me. I kept reading it and looking at all the pictures of the people I knew,” she explained. Joan said she decided to call someone because she felt a connection to Thomas More College and wanted to share her pride and appreciation for being able to stay connected through the stories and photos in Moreover.

Joan said she also enjoyed reading about TMC’s women’s basketball team who won the NCAA Div. III National Championship. She was proud of her alma mater. “I have grandchildren who are excellent athletes and I was so excited for those girls,” she elaborated. Joan met her late husband, Robert Hegge ’57, at Villa Madonna. She was an English major and he studied chemistry. (Robert died in 2013.) They married and raised four children in Northern Kentucky. In addition to reading Moreover, Joan enjoys spending time with her 10 grandchildren.

If you’d like to provide feedback to the stories that appear in the Moreover magazine, please email moreover@thomasmore.edu with your comments. Thank you for your loyalty to Moreover!