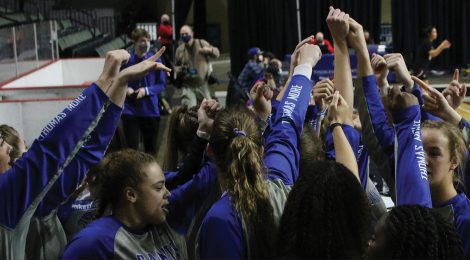 What an amazing year, what a challenging year! Hats off to the women’s basketball team who, as still reigning NCAA DIII champs (thanks to COVID), fought their way through their first NAIA Championship Tournament to be one of two teams in the final game. A truly incredible feat as the team had their 2019-20 year cut short and it was anyone’s guess as to the havoc the pandemic would wreak on the 2020-21 season. It is challenging enough to be a student juggling classwork with athletics but even more so when your collegiate experience is turned upside down by moving to online classes, implementing restrictions mandated by the Centers for Disease Control and Prevention, and multiple Health Departments, plus the constant turmoil of cancellations, rescheduling of games, and testing for COVID in a year that is anything but normal.

As it goes, the Saints were fortunate to have a rather full season, playing 31 games over the course of the regular and post season. Even more outstanding was their rise to the No. 1 ranking in the country in February. “Our student athletes have done a fantastic job,” said President Joe Chillo. “Especially with COVID, after taking all the necessary precautions, it’s great to have the opportunity to put folks back into somewhat of a normality. It’s wonderful to be able to root for some great basketball.” The Saints won both the Mid-South Conference regular season and tournament in early March and earned the No. 1 seed in the NAIA National Championship opening round with their bracket hosted in the Connor Convocation Center. They moved on to the Round of 16 where they remained the top-seeded team.

The Saints moved handily through the early rounds of the competition which was held in Sioux City, Iowa, at the Tyson Event Center. The first major challenge came in the National Semifinal game versus Morningside College. The game was hotly contested with the win coming down to the final minute of the game as Morningside doggedly answered every bucket. The final score had the Saints on top by three but it came at a cost as starting guard and Women’s Coaches Basketball Association All-American Zoie Barth sustained a season ending injury in one of the final plays.

The opponent for the Championship Game was the Westmont College Warriors, the No. 2 seed for the tournament and the 2020 No. 1 seed before COVID shut the season down. The Warriors were formidable being the 2018 national runner-up and earning the title in 2013. The stage was set for a monumental showdown. The Saints came out hot at the game’s start jumping to a 15-8 lead early in the game. They shot a blazing 44% from the field and had the advantage with height in the paint. As the second quarter progressed, the Warriors settled down and refocused on what got them to this game – defense. Capitalizing on turnovers and out rebounding the Saints put them in a position where they took the lead just before the first half ended. The Saints rallied in the second half to, several times, get within four points of their rival but could not quite push their way into the lead and ran out of time.

It was a gallant effort and there is no doubt we will see these women back in the spotlight next season. Head coach Jeff Hans had this to say, “Even though it wasn’t the exact ending that we wanted, I’m very proud of our team. We asked our student-athletes to make a lot of sacrifices that others may not have made to play a game that we love. The journey to the NAIA National Championship game was incredible and I want to thank our three seniors, Kylie Anderson, Briana McNutt, and Hayden White, that have meant a lot to our program. A special thank you to our administration for working hard to make sure that our student-athletes were able to compete all season and do it in a safe manner.” Lets go Saints!