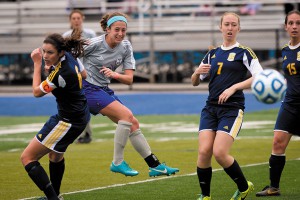 Courtney Clark in action on the soccer field.

Summer 2013 was drawing to a close and school was about to begin. However, instead of being excited to see our friends, all we could think about were the dreaded two-a-days looming ahead. The heat outside was miserable, burning our toes and legs from the incredibly hot turf. The painful burn would then change to an icy numb when we jumped into the ice baths after practice.

Those long practices showed us just how much different we were than last year’s team and how much work we needed to put in to achieve the PAC Championship again. With only eleven returning players and twelve newcomers, it was up to the veterans to lead the way, and lead the way we did.

We had never played John Carroll before, so we came into the opening game of the season a little bit nervous. All the long practices paid off, and we defeated them by a score of 5-0. That was when I knew this team was destined to do something special. A couple of games later we lost to Capital 2-1 in two overtimes. Although it was a tough loss, it showed us how competitive and strong we were as a team. That pressure molded us into a strong team, playing off each other’s strengths to be successful in each game. 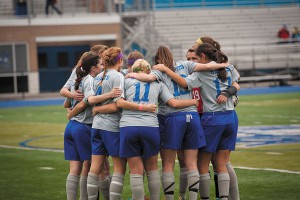 The Lady Saints huddle on the field.

For the rest of the regular season, we didn’t lose a single game. We made an awesome run through the PAC tournament defeating Saint Vincent and Grove City to win our third straight Championship. Right after that we learned that we were going to host our first NCAA tournament. The whole campus seemed to buzz with excitement. After we beat Alleghany, we were up to play Hanover. We had tied them in regular season, so we had something to prove. With the game about to start, we stepped onto the field. As the toll bells rang, our hearts beat faster and the anticipation grew. We had prepared ourselves for this moment for three long months, and as we huddled in a circle we refused to let this be our last game. As the whistle blew, we set out to make history and with a score of 1-0, we did just that. We were on our way to the Sweet Sixteen!

The bus ride to St. Louis for the game against Capital was a mix of nervousness, excitement and an eerie peacefulness. We felt one as a team and knew we belonged where we were going. It was a tough game as we battled the elements and a strong Capital team. As the clock hit zero, I saw that we had been defeated 2-1 and tears came rushing to my eyes. I felt a heavy sadness that the season had ended and that we were one win away from going to Texas for the national championship. Adding to my sadness was the fact that this was the last game of my career. Even with all of these depressing thoughts, I felt happiness because we had achieved so much as such a young team. I walked off the field and looked up into the stands; I saw all the parents, family and friends who had traveled so far to see us play and it made me realize how blessed I am.My job as a player is to leave the team better than when I arrived. As one of two departing seniors, I think we seniors did just that. Not only did we become a family, we also won three PAC championships and made it to the Sweet Sixteen. We did more than just leave the team better; we left a legacy for a new standard of success for years to come. 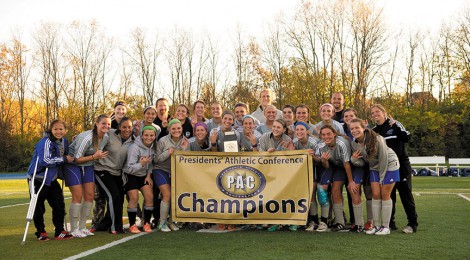