For questions or to submit a story idea, contact Rebecca Stratton at 859-344-3309.
Browse: Home   /   Students Succeed While Using the TMC Success Center 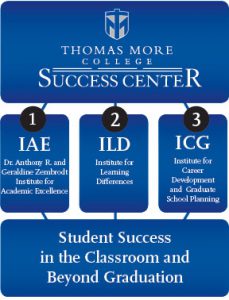 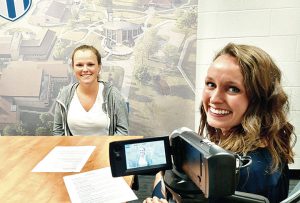 The Joe Raphael ’75 ICG Studio was dedicated to provide the latest in video technology for student use.

The Institute for Career Development and Graduate School Planning (ICG), part of the TMC Success Center, opened the Studio in fall 2017. An anonymous donor funded the project to honor the memory of Joe who was an avid photographer and story teller. The studio provides a dedicated space for students and alumni to create video resumes, practice interview skills (with video feedback), and participate in Skype/video interviews. To take advantage of this resource, contact Robin Norton at nortonr@thomasmore.edu 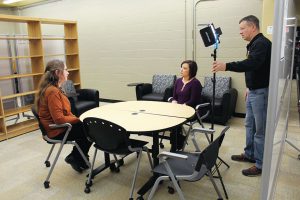 TMC is ranked ninth among the 20 best value colleges for students with ADHD (2017-18 bestvalueschools.com). As part of the TMC Success Center, the ILD provides the necessary services to ensure the best possible outcome in higher education for students with documented learning differences. Director Amy Osborne outlined program benefits with Kathryn Nero, WCPO-TV, on Feb. 15, 2018. If you missed the interview, view it now at tmcky.us/ILDinterview 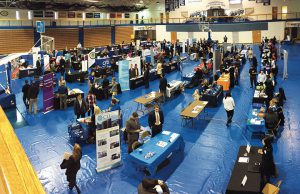 In addition to marking the 540th anniversary of the birth of Saint Thomas More, February 7 was the day TMC held the annual Career & Internship Fair, open to current students and alumni. Over 75 employers were on site to answer questions and take applications. Birthday cake was served in St. Thomas More’s honor and to kick off the year-long 50th anniversary of the Crestview Hills campus. For the third year in a row, an an interview contest took place during the fair, funded by Richard R. Lindhorst ’75. This year’s contest resulted in a four-way tie between Shawn Hryb ’18, Andrew James ’20, Paris Quarles ’18, and Taylor Walz ’19. The winning students split the $2,000 prize. Congratulations to all! 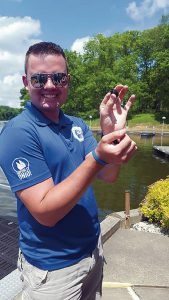 Johnny Lewis ’20 on site as he participates in a summer 2017 internship with the Ohio Department of Natural Resources.

Internships as Part of Experiential Learning

TMC is the only college in the state of Kentucky to require an Experiential Learning  Credit for graduation. Internships are one way students fulfill that mandate. Professor J.T. Spence tells us about just a few political science majors making a difference in the community as interns, “I had two students complete internships with the non-partisan organization, Kentuckians For The Commonwealth (KFTC), in summer 2017; Jeni Hall ’19 worked in the Northern Kentucky office while Austin Lowe ’19 worked in the Berea office. Austin even had an article he wrote published in KFTC’s publication. Another student, Johnny Lewis ’20 (pictured right), performed an internship with the Ohio Department of Natural Resources and learned about the complexity of running a state park. Most recently Noah Galvin ’19 participated in an internship with the city of Villa HIlls.” If you know of internship opportunities for TMC students, please contact the ICG at nortonr@thomasmore.edu