VMC to TMC: A Golden Anniversary

There are moments in a person’s history that remain crystal clear, even with the passage of time. Poignant experiences that are seared into the fabric of one’s being because they were particularly beautiful, or emotional, or of extreme importance. The Dedication of the new Thomas More College on September 28, 1968, was one such moment for many alumni and friends of the College. The events leading up to and the day of the Dedication were especially memorable for former students Judith (Middendorf) Marlowe ’69 and Don Thelen ’71, who were directly involved. Judith was Student Council President and on the committee charged with planning the events that took place. Don was also on Student Council, and he was tapped to be part of the Secret Service security detail that infiltrated TMC when it was announced that President Lyndon B. Johnson would be in attendance at the Academic Convocation. Moreover invited these two alumni to give their version of that momentous day:

“It was a memorable occasion, especially once we found out that the President was coming. There was excitement through the air.” – Don Thelen ’71

“I was on Student Council my freshman, sophomore, and junior years, and as such when it was determined the President would be coming on campus, I was contacted by the Secret Service to assist with security. Several of the Secret Service people and I were stationed in the mezzanine overlooking Seiler Commons where the Dedication Ceremony occurred. I was asked to keep a look out on the crowd for anything out of the ordinary or strange, anything that they might need to respond to quickly.

“It was a memorable occasion, especially once we found out that the President was coming. There was excitement through the air. In general, it was just a beautiful day and the ceremony went very smoothly. Unfortunately, I did not get to meet the President as I was with the security team the whole time.”

“When the President arrived at the College, there was a feeling of electricity in the crowd.” – Judith (Middendorf) Marlowe ’69

“In spring 1968, I was elected President of the Student Council, which was what we called the Student Government Association at that time. I was the first woman to be elected to that position since the 1940s, so it caused quite a bit of interest among the faculty and the administration. It gave me a wonderful opportunity because in that position I was able to work closely with Monsignor (John F.) Murphy, who was the President of the College at that time.

“He was such a magnificent leader, and I was able to learn leadership skills from him up close and personal because at that time, as President of the Student Council, I was able to sit on the Administration Committee of the Board of Overseers. That’s how I was asked to join the steering committee tasked with planning the Dedication that was to be held in September of 1968. I was specifically put in charge of the Pig Roast Barbecue, which was scheduled for the opening day of Dedication Week. It was primarily aimed at students, and we also invited the neighboring communities around the campus. It was billed as a family day on the college campus, and I enjoyed my leadership role very much. 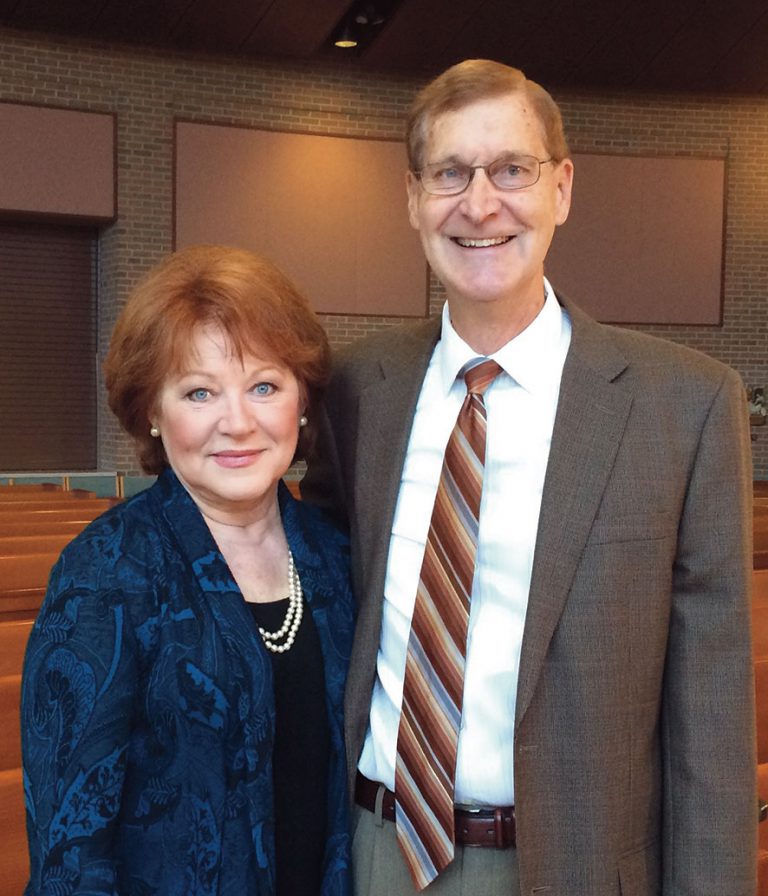 “How Thomas More College was visited by the President of the United States is truly amazing. It’s probably an indication of the power of prayer. I remember so vividly that at one of our (steering committee) meetings, Monsignor Murphy walked into the chancellor’s dining room and said, ‘There is a secret I’m going to share with all of you, but you are not able to tell anyone, not even your family. We have proffered an invitation to the President of the United States to attend.’ … Monsignor Murphy had connections in Washington through the National Catholic Education Association, and he had used these connections to get into the inner circle of the White House and to offer this invitation. The initial response from the President was that he couldn’t plan that far ahead, not knowing what would be required of him in September. So he postponed the decision.

“But Father Murphy felt that there was a chance the President would attend, so he brought us all in on the secret. That required us to have a plan A and a plan B because we weren’t going to know until the day of the Dedication whether or not the President would be there. We constructed a very elaborate scenario for both possibilities and then just had to keep quiet about it, which was extremely difficult as you can imagine. I couldn’t tell my parents what was going on; I couldn’t even tell the other members of the student council what was going on. So all of us who were in on the secret found ourselves having private little conversations because we were just bursting to talk to somebody about this possibility and that was the only way we could.

“My role during the actual Dedication was to be on the dais, the speaker’s platform. Earlier in the week, the Secret Service did visit campus, as they needed to install the dedicated phone line that would be connected to the famous White House red phone, if the President came. We became hopeful that he was going to come when we saw the agents arrive on campus to do this. We were at the luncheon on the day of the Dedication, which was the last Saturday in September. Father Murphy and I were seated next to one another and suddenly we each felt a tap on our shoulders as the Secret Service came up and said, ‘Come back to campus now.’ Rufus Youngblood of the Secret Service was already in the circle recording the names of everyone to make sure that all of us had a connection with the college and could be identified.

“There were more than a thousand people in Seiler Commons, and we had representatives from other colleges and universities who had accepted the invitation to come. They joined the Academic Convocation procession in full academic regalia; it was really a splendid sight. We processed in to the platform. Bishop Ackerman spoke a welcome. Father Garvey gave an invocation. And then I, as representative of the students, gave a short welcome, followed by representatives from alumni and from the faculty. There were honorary degrees awarded to Rabbi Nelson Glueck, who at that time was the President of Hebrew Union College; Dr. Martin Marty, who was to be the main speaker if the President did not arrive; and Mr. Zimmer, who was the head of the Cincinnati Gas and Electric company and who had been quite a champion of education in Northern Kentucky.

“It was about 3 p.m. when the President arrived on the campus. I was on the platform until the President’s motorcade rolled in to the campus. I looked out the side door of Seiler Commons and saw a Secret Service agent motioning to me. I went off the side entrance, doffed my cap and gown, ran out to the circle, greeted the President and then went back in to join the platform until the President came into the room. … There was a feeling of almost electricity in the crowd. By then, a last-minute insert had been stuffed into the programs signaling to all of the attendees that the President of the United States was going to be there. I’m not sure the audience listened to anybody speaking because they were waiting for the President to appear and when he did, there was thunderous applause. The roar of cheers continued as Monsignor Murphy escorted the President down the center aisle. The President stopped to greet every individual he possibly could. It took him a long time to reach the podium and when he was introduced, again, the crowd was on their feet. There were just constant standing ovations that went on throughout his brief time at the college.

“Later, I was to go back to Air Force One with Monsignor Murphy but was separated by the press of the crowd, so I didn’t make it to the circle in time. The Secret Service was adamant about getting in that car and leaving. One of my favorite stories is that when Monsignor Murphy came back from Air Force One he said, ‘Well, you certainly made an impression on the President,’ and he started emptying his pockets. He had pens and note cards and match books and an autograph, all from Air Force One, that the President wanted him to bring back to me. … I was told later by someone who knew the President that I reminded him personality-wise of his daughter Luci but I also reminded him, in a more academic way, of his daughter Lynda Bird and that was why we just hit it off.

“My other favorite memory from the day is that my mother was a member of the Women’s Guild, and she was volunteering. She didn’t see anything because she was in the kitchen preparing the trays of food for the reception that was going to be held. Several years later when President Johnson passed away and the local news stations were re-running the footage from the Dedication, she called me to let me know that when the President finished speaking, I was the first one that jumped up and started applauding him. She said, ‘Here’s my daughter on the platform with the President of the United States, and I don’t get to see it until I watch it on TV years later.’”

VMC to TMC – why a name change?

The name of the college had been questioned ever since 1929 when the administration passed from the Benedictine Sisters to the joint administration of the three Religious communities in the diocese, and still later in 1945 when the college became coeducational.

The college began a new chapter in January, 1968, when it moved to the new campus in Fort Mitchell (now Crestview Hills). On February 21, Bishop H. Ackerman, Chancellor of the College, announced that Villa Madonna College would officially take its new name – Thomas More College – on June 15, 1968. The Bishop pointed out that with a growing coeducational institution, an expanding campus and the opportunity to serve a wider area, the Trustees felt that this was the acceptable time to change. The name, Thomas More, was chosen “because the man was a scholar, statesman and layman committed to selfless public service and one of the few men in this category canonized by the Church. No finer tribute can be paid to members of the college community by the Trustees than their conviction that the great name of Thomas More best exemplifies the spirit that has contributed to the College’s greatness to its goal for the future.”*