For questions or to submit a story idea, contact Rebecca Stratton at 859-344-3309.
Browse: Home   /   TMC Dedication Week 50th Anniversary: A Time for Looking Back While Moving Forward 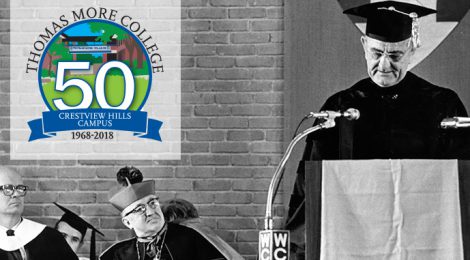 TMC Dedication Week 50th Anniversary: A Time for Looking Back While Moving Forward 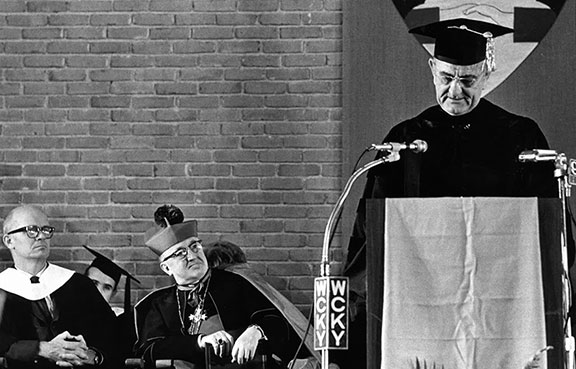 The year was 1968. Mission: Impossible was a network TV hit. For the Steering Committee planning the Dedication Ceremonies that would make the transition of Villa Madonna College to Thomas More College, however, the show’s title took on a special significance as College President, Monsignor John F. Murphy, shared a secret one evening at their regular meeting. The mission, should President Lyndon Johnson decide to accept, was to include among the campus events a unique academic convocation during which the chief executive would receive an honorary degree.Could there be a serious hope that the leader of the free world would actually travel to a small college in Kentucky?

Thus began what some regarded as our very own More-Mission: Impossible, but one that certainly had the most successful ending imaginable. On that sunny afternoon, September 28, 1968, our “small Kentucky college” played host to a cast of Secret Service agents, news reporters, local dignitaries, faculty, students, and Crestview Hills neighbors all gathered on the college grounds as word spread of the important visitor approaching in a caravan of grey limousines. Pulling into the circle where he was welcomed with cheers and applause, President Johnson waved his way into the Administration Building to await his entrance into Seiler Commons where an excited crowd had opened their programs to find an insert hastily tucked in announcing this grand surprise appearance. With the blessing of Bishop Richard Ackerman and the inspiring words of faculty, alumni, and student representatives, the stage was set for an unforgettable moment in the history of Villa Madonna, now Thomas More College. 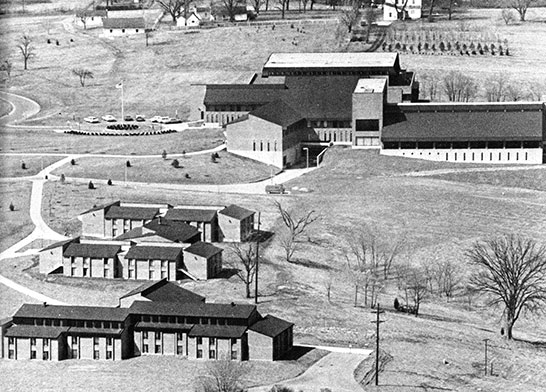 View of the early Crestview Hills campus from the air.

“Harvard for a Day – That’s Thomas More” headlined the Cincinnati Enquirer front page the next morning as TMC enjoyed generous media attention and press coverage that continued for weeks highlighting all that was good about this “small college.” Perhaps you were there — or heard about that amazing day!

September 2018 marks the 50th Anniversary of the Thomas More College dedication. Plans are underway for athletic, theatre, music, social, and academic events that once again will bring all members of the TMC family — students, faculty, alumni — along with the Greater Cincinnati community, together. This special milestone will be a time to honor our history, celebrate with gratitude our present blessings and opportunities while renewing our commitment to build upon the TMC legacy to ensure that future generations of students will transform their lives and the world.

Look for more details in the spring 2018 edition of Moreover and, most importantly, plan to join the festivities next September during the 50th Anniversary Celebration!

← Jude Grosser ’76, Bolstering the Citrus Industry
A Life Guided by Divine Providence: A Tribute to Wm. T. (Bill) Robinson III ’67 and His Years at VMC →