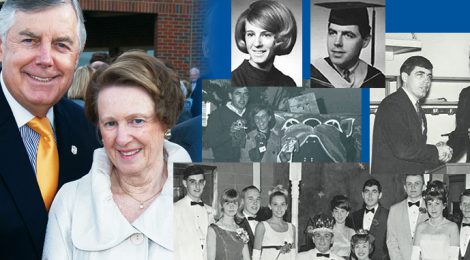 A Life Guided by Divine Providence: A Tribute to Wm. T. (Bill) Robinson III ’67 and His Years at VMC

Wm. T. (Bill) Robinson III ’67, referred to as one of Thomas More College’s most prominent alumni, is often lauded for his many impressive achievements, including being named chairman of the National Judicial College Board of Trustees and the 135th President of the American Bar Association. On May 9, 2017, we lost this TMC Saint, but his legacy lives on in the people whose lives he touched and the organizations which he helped. Most recently, at TMC, he was instrumental in the creation of the Institute for Religious Liberty and in establishing the Robinson Family Academic Mentoring Center (part of the Thomas More College Success Center). Before Bill left us, President David A. Armstrong, J.D., was able to sit down with him for an interview. In it, Bill spoke at length about his memories of Villa Madonna College (VMC).

The highlight of Spring Prom 1966 was the coronation of royalty. As Social Committee Chairman, it was Bill’s job to crown the king and queen. This photo includes Bill with his date, Joan, at center behind King Ben Fister ’66 and Queen Tracy Hellmann ’66, surrounded by attendants from the other classes.

When prompted as to why he chose Thomas More College (then Villa Madonna College) Bill answered honestly that, while he would like to say it was a choice made after a lot of careful research, in actuality he asked his parents, “Which college is closest to where we live?” Upon them answering VMC, he made his decision: “Well, that’s where I’ll go.” At the time that he attended VMC, it was still in its fragmented, less-aesthetic form in downtown Covington, Ky. Other alumni interviewed in the past by the Moreover have frequently remarked on the limitations of the old location and its hodge-podge of buildings (including a bar) converted into classrooms. There were no dorms, gym, or parking lot, but even so, it made no difference to Bill. He saw the time he spent as a child at the simplistic Holy Name Grade School as an advantage in this respect because, for him, “education was not about the physical facilities, it was about the quality of the professors and the quality of [the] education that we received, and the education at VMC, Thomas More College, was of the highest quality.”

A high quality education does not come easy, however, as Bill found out once he started. Though he entered as an English major, he admitted that he had little guidance on what to study, and soon after made up his mind to switch majors. Having heard good things about VMC’s history program and its reputation as good preparation for law school, he made an appointment with the head of the department, Sr. Mary Philip. After chatting with her a while about the program, he said to her, “Sister, I’ve decided to attend the History Department,” to which she tartly retorted, “Who invited you?” She then told him she would consider the matter and get back with him the next day with her decision. Bill knew from that moment that it wouldn’t be easy but it proved to be exactly the challenge he needed and had been looking for.

He recounted with energy how intense the history program was then and is today, though back then each graduating history student had to take a four-year-comprehensive essay exam over all the history courses he or she had taken. Bill went on to say that he likes to think that preparing for his Bar Exam after Law School was a walk in the park compared to that History Department exam. Despite this final hardship, he remembered his time in the program very fondly, even stating that, “two of the best professors I’ve ever had in my life were Sr. Mary Albert and Sr. Mary Philip in the History Department.”

Bill found not only that the quality of education was superior (despite the lack-luster facilities) but that being a small commuter “campus” would not stop him from getting involved in extracurricular activities and having a memorable college experience outside the classroom. Bill had spent his high school years and the first year of college in the seminary and had not experienced prom or other types of extracurriculars. He made the most of college by figuring out how best to meet the most students and get involved in the overall VMC experience. He did this by running for President of Student Council – in his first year! Even if his opponent hadn’t been the captain and center of the basketball team, Bill knew he wouldn’t win but he accomplished his real goal of getting a chance to meet a lot of students and student leaders in the school community. He went on to stay in Student Council, congratulate his opponent, and volunteer to do whatever was needed to help. 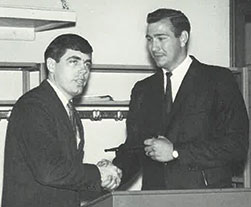 This spirit of doing what he could to improve campus life persisted throughout his time at VMC. When he noticed there was just one fraternity, he co-founded Alpha Delta Gamma (ADG) to encourage student engagement by introducing a second option for Greek life; thereby bolstering group pride and creating a friendly rivalry. As one of a group of very active history students, he helped Sr. Mary Philip start VMC’s own history honorary society chapter: Phi Alpha Theta. Fittingly, Bill was able to attend and speak at the 50th Anniversary Celebration of the chapter’s founding in fall 2016, along with other history alums and current students.

Having fun with Alpha Delta Gamma brothers, Bill is second from the right. 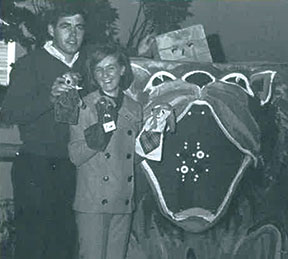 costumes. They went on to marry in 1969, after she graduated from VMC.

Going to VMC was one of the best decisions of his life in part, Bill said, because it was where he met his future wife, Joan Wernersbach. He was a junior in 1965 when his younger brother, a freshman, introduced the two, knowing that they were perfect for one another. He could not have been more right. The couple were both involved on campus, planned a prom together, and even won a prize at the Halloween dance in 1967 for “most original” costumes. They went on to marry in 1969, after she graduated from VMC.

When asked the final question of how his education at VMC prepared him for his prestigious career, Bill ended on the same note with which he started the interview: divine providence. He firmly believed that not only had his choice of going to VMC been subject to this holy influence but that the course of his whole life had been guided by it. At VMC he blazed his path of history into law, met his wife Joan, and recognized in himself a leader with the potential to not only do great things, but also to leave a great impact.

While it was the History Department specifically that prepared him for success in law school, it was Villa Madonna College as a whole experience that, “gave me confidence. It eliminated fear of failure. It gave me a religious base of faith and divine providence that made me feel very confident about God’s support and destiny for me.”

Growing up on Greenup Street near 24th St., Joan (Wernersbach) Robinson, remembers well the downtown Covington campus; she felt very comfortable with the 12 block walk to the north side of the College’s footprint, which was spread out over several blocks. In her words, “Walking in the weather, walking from building to building … you knew everybody, you knew freshman, sophomore, junior – everybody said ‘hi’ to everybody.” The commonalities for most students included the commute and a thriving work ethic – almost everyone worked part time.

Bill graduated before the move to Crestview Hills, but Joan spent the second half of her junior year (the move happened in January) and senior year on the new campus. There was something positive to be said for the personal feel and camaraderie of the downtown campus, but the College’s new location offered a nice respite to get out of the year-round weather walking from building to building over several city blocks.

Joan does remember how brutal the wind could be walking in from the parking lot. She commented on the fact that it was several years after the move, before women were allowed to wear slacks to class. This earlier era had a far more stringent dress code and Joan recalled that Sr. Mary Philip required history majors (Bill) attending her classes, to arrive wearing a tie. This requirement was to reinforce the value of projecting a professional appearance.

When asked if she had advice for current students, Joan said, “Just enjoy the experience, … like anything in life, it’s hard to take advantage of the moment and enjoy it because you are generally looking forward, looking past it. You have an opportunity to develop life-long friendships whether or not these people are in your same area of concentration. That’s probably the greatest gift any of us took away from the college experience, those life-long friendships.”