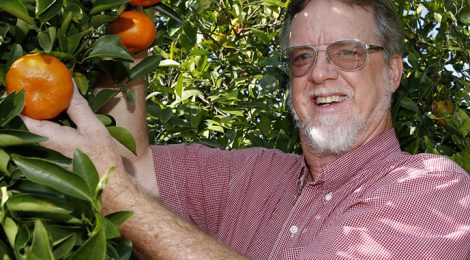 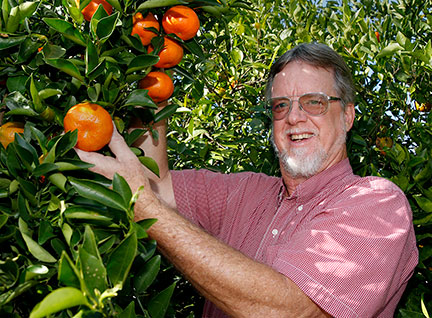 When presented with an opportunity to write an article about Dr. Jude Grosser, and after learning about his past accomplishments and the work he is currently doing, I was intrigued and inspired to get to know him, and to help the entire TMC community realize the great value an education at Thomas More College brings to one’s life. Thomas More College prepares its students to be leaders for life.

Because of the recent events involving Florida (specifically the impact of Hurricane Irma), and the lack of power throughout the state, I had an email conversation with Dr. Grosser. Throughout that conversation, I asked questions to help Thomas More College, and myself, get to know him better.

Q: What drew you to attend Thomas More College?
A: My oldest brother Tim (’72) went to Thomas More ahead of me – and majored in biology. Since I liked to play in the woods and creeks with an interest in nature, I also developed an interest in biology. Tim had a good experience at TMC, so it drew my attention. Tim went to med-school at the University of Louisville and has been practicing medicine in Maysville ever since. I followed his path to TMC, with two of my high school friends Bill Verax ’76 (now a dentist) and Mike Halpin ’76 (now a heart surgeon).

Q: Did you have any class or research experiences at Thomas More that led to your interests in your work in Citrus Greening?
A: In my opinion, TMC had the absolute best Biology Department faculty of all time. Sr. Mary Laurence (the Big Nun), Doc Wallace Humphries, Dr. Bill Bryant (the Chief), and Mr. Volker were all incredible and all had a big influence on me. Sr. Laurence got me interested in genetics and evolution; Doc Humphries in physiology; and Dr. Bryant in ecology. Mr. Volker was Mr. Enthusiasm. Each one of these special teachers was a blessing – and they were also good friends that always treated us like family. Just check out the record – we had a small class, but nearly every one of us went on to either med school, dental school, or graduate school! I also had the great fortune of working on the Ohio River project for two summers. I still remember doing fish surveys with the home-made electro-shocker and classifying the multitude of algae species living in the river – this definitely spurred my interest in research. I can still visualize a rainy day on the research boat with the Big Nun in her black habit from head to toe wearing a bright orange rain poncho – standing tall in the boat going down the river in the pouring rain – you can only imagine! I called Dr. Bryant for advice when I was thinking about a Master of Science program at Morehead State University, and then again for the doctorate program at the University of Kentucky – he told me I could do it and I wouldn’t know for sure if I didn’t try – just the encouragement I needed each time.

Q: What led to your interest in Citrus Greening?
A: This was not by choice. After working for 23 years to solve the other multitude of problems existing in citrus, this scourge hit Florida and immediately began destroying the industry. Genetics and breeding are considered to be the ultimate solutions to this problem, so we immediately began to devote our full attention to solving this problem which threatens our industry. We have made a lot of progress with our research, and I feel we have just started to turn the corner, albeit this was set back by Hurricane Irma.

Q: What is Citrus Greening?
A: Citrus greening, also known as ‘Huanglongbing,’ is the worst disease scourge of citrus. It is a phloem-limited bacterial disease that is transmitted by a small insect called the psyllid. The disease is spread similar to how malaria in humans was spread by mosquitos. Once infected, trees rapidly lose their feeder roots, and the phloem becomes clogged – resulting in a starving tree. Citrus growers are primarily trying to control the disease by controlling the insect vector, but this is not working, as now nearly every producing tree in the state is infected. I am working on the development of rootstocks that can transmit some tolerance to grafted commercial scions (the fruit varieties), as well as new fruit cultivars that are more tolerant but still of high commercial quality. I have also been involved in some advances made with nutrition – that strongly interacts with genetics to provide tolerance. Roots of infected trees are severely deficient in nearly all of the secondary and micro-nutrients; so, methods of basically spoon-feeding that provide higher levels of these nutrients help restore tree health and productivity. This can be accomplished by using fertigation or controlled release fertilizers (CRF).

Q: What inspired you to become a biology major, and ultimately a citrus breeder and geneticist?
A: As mentioned previously, I’ve always been an outdoors kid interested in biology. I wanted to go into fisheries biology; I was accepted by two graduate programs, but no money was offered so I couldn’t pursue this. After my Master of Science in General Biology (working on algae and pollution), while working as a quality control technician at Kahn’s Meat Packing Co. in Cincinnati, Ohio (near to home in northern Kentucky – I wanted to be near home because my mother was suffering from breast cancer), I got a call from one of my teachers at Morehead. He told me there was an assistantship open in the Agronomy Department at UK in Lexington, Ky., in genetics and breeding of all things; thus SERENDIPITY! I was actually a bit intimidated by high-powered genetics at this time, but, on my interview there I really liked the professor (Dr. Glenn Collins) and was really impressed with his research program in crop biotechnology. He offered me an assistantship and here I am now! I have been blessed with outstanding, dedicated teachers at all phases of my education.

Q: Has the Liberal Arts education provided at Thomas More given you an advantage in your post-baccalaureate education and in the workforce?
A: Without question. I feel like I finally grew up during my senior year at TMC. I started at TMC as a naïve, fun-loving kid, never having to work very hard to get by. The TMC faculty, through a lot of their personal touch efforts, finally turned me into a good, more focused, and mature student. The TMC faculty peripheral to my biology education were also outstanding. I still remember learning a lot from Sr. Rose (calculus), Sr. Casmira and Mr. Reed (chemistry), and others (physics, religion, etc.). Much of my life-long philosophy was molded by my TMC experience. I’m still part fun-loving kid, as my philosophy is to work hard, play hard, and follow the golden rule. When I got to the big leagues at UK, competing with other students from all over the U.S. and the world, it became obvious to me how well-rounded my education really was, anchored by my start at TMC.

Q: Favorite memories from your time at Thomas More College?
A: We probably staged the only (Big Fake) wrestling match ever held at TMC (at Seiler Commons). I had a sister and cousin with Down’s Syndrome, and my aunt (Bobbye Stone) was the President of the Northern Kentucky Guild for Children with Down’s Syndrome. She was looking for funding to support their efforts, so I volunteered that we would put on a wrestling show to raise money. I talked many of my life-long friends into participating as wrestlers, mimicking the crazy wrestlers on TV, and I choreographed the entire show. My friend that was a carpenter (Steve Beiting) built the ring, and he played the wild man from the Amazon jungle. He was supposed to fight in the second match; we carried him out at the beginning in a cage sitting on two poles. The first match was between the Psycho and the Black Obliterator. The Black Obliterator was supposed to ram the Psycho’s head into the turnbuckle three times, but the whole ring caved in after the first hit; thus we had to get the wild man out of the cage to fix the ring! My cousin Mike Stone, also a TMC student at the time, played the Troglodite Cave Man in the show, wrestling against Tex Kellinghaus. Several of my student colleagues worked the show, and we ended up making a few hundred dollars. Lots of fun – my best friend Don Young still has an original program.

Q: Proudest accomplishment?
A: Along with my lovely wife Donna, successfully raising three beautiful daughters, all now college graduates. My oldest daughter Melinda has a doctorate from North Carolina in molecular microbiology and is now doing a post-doc at Univeristy of California, Berkeley. My middle daughter Molly has a Master of Arts from Lesley University and is working as an art therapist in Cambridge, Mass. Our baby Heidi just graduated from Florida State University in Tallahassee and is preparing for graduate school.

Q: What is the most interesting aspect of your work?
A: I get to work on nearly all varieties and many research aspects of citrus. I work on developing new and improved sweet oranges, tangerines and tangelos, grapefruits and pummelos, lemons and limes, ornamentals, and rootstocks. I get to apply many biotechnologies to solve practical problems – involving pathology (disease resistance), insects, abiotic and biotic stresses, fruit quality, fruit maturation dates, etc.

Q: If you could do it all over, would you see yourself in the same position you are in today?
A: Absolutely – if I could get so lucky twice!

Q: What advice would you give to biology majors today?
A: Stay general until you know what specific area you want to pursue – get exposed to as many interesting topics as possible as there may be an interesting and rewarding niche out there that you haven’t even thought about. This is the same advice I got from Dr. Bryant.

Q: Has the use and development of technology made your job easier over your time as a citrus breeder/geneticist?
A: This is what got me the job at UF/CREC. I was hired to bring protoplast fusion/somatic hybridization technology to citrus. I developed this technology for clovers while earning my Ph.D. at UK under two incredible advisors (Dr. Glenn Collins in biotechnology and Dr. Norman Taylor the clover breeder). I was highly successful in adapting this technology in citrus, and now labs all over the world use techniques developed in my lab. We are also at the forefront of developing genetic engineering techniques in citrus, which has many applications including the development of our purple limes (purple margaritas anyone?). 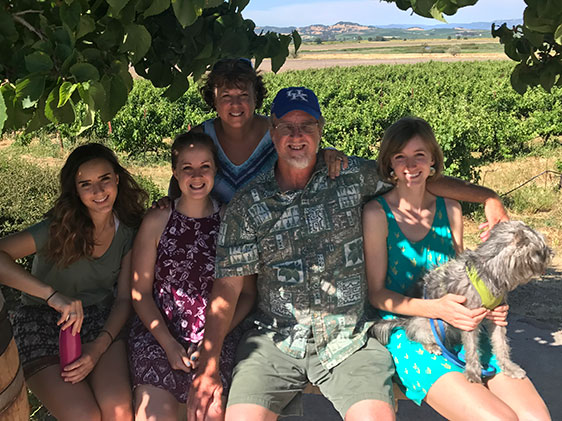 Jude graduated from Thomas More College in 1976 with a Bachelor of Arts in Biology. After graduation, Jude went on to receive a master’s degree from Morehead State University, and then a doctorate in genetics and breeding from the University of Kentucky in 1984. He is married to Donna Hale Grosser who owns Family Learning Solutions LLC, a family counseling practice in Winter Haven, Fla, and has three daughters: Melinda, Molly and Heidi. Jude is a Professor of Citrus Breeding and Genetics, Citrus Research and Education Center, Lake Alfred, at the University of Florida.

Tyler is a senior biology major who plans to get his master’s degree in physician assistant studies after graduating from Thomas More College. Tyler is a member of the Biology, Chemistry, Math and Physics, and Blue and Green clubs, as well as the Pre-Health Professionals Society. He is a member of the Saints baseball team and is the Senior Resident Assistant of Murphy Hall.

Dr. Grosser and his team members were featured in The Ledger in December 2016, to read the story on Jude’s work, visit tmcky.us/JudeGrosser