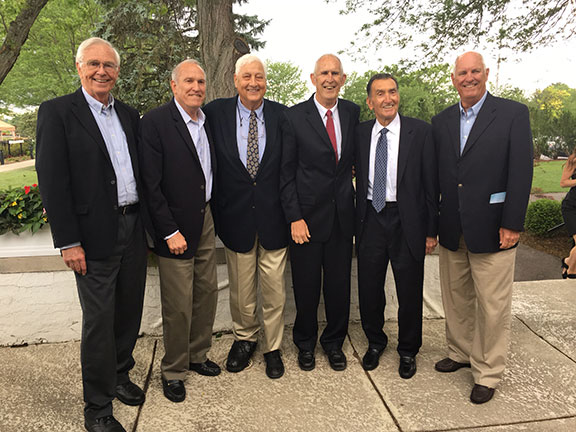 Robert J. Kohlhepp ’63. If you attend a home game at XU in the near future, you will notice that the Cintas Center playing floor has been renamed the Kohlhepp Family Court in honor of Bob Kohlhepp, former Chairman and CEO of Cintas, and his family. Congratulations to Bob and family, what an honor!

Deacon Jerry Franzen ’64 teaches a course entitled “The Mass as Prayer” among the catechetical courses offered by the Diocese of Covington Office of Catechesis and Faith Formation. He is also Professor Emeritus of the Chemistry Department at TMC.

Vickie Cimprich ’72 was one of seven Kentucky women selected for The Kentucky Foundation for Women’s (KFW) 2017 Summer Residency Program “Voice Lessons,” which took place from June 11-17. The program was held at Hopscotch House, KFW’s retreat center, and led by George Ella Lyon, outgoing Poet Laureate of Kentucky. Lyon facilitated group workshops and provided individual mentoring during this week-longimmersion into writing craft, voice development, and community building. Cimprich seeks to renew her commitment as an activist aligned with Pope Francis’s teachings in “Laudato Si,” as well as on behalf of human rights, the homeless, hungry and disabled. During the SRP, she developed poems for her new collection “Contrary-wise,” which focuses on her over thirty years of residence and private retreats at St. Therese Oratory in Lee County, in the mountains of Eastern Kentucky.

Dale Racinella ’74, continues his prison ministry, handling dozens of prayer appointments and death watch when executions are scheduled. His work was included in an article published in the summer 2017 issue of the Catholic Digest. For more information on Dale’s ministry, visit IWasInPrison.org.

Cody Goodin ’84 exhibited artwork, along with other members of the Cincinnati Books Art Society, in the show Naturally Inspired held at the Clifton Cultural Arts Center in Cincinnati, Ohio, spring 2017.

Kimberly (Lotz-Wilke) Halbauer ’00 was appointed to the Council on Postsecondary Education (CPE) by Governor Matt Bevin in July 2017. Kim was administered the oath of office by Jefferson District Court Judge Eric Haner at the CPE’s September meeting in Louisville. She is a senior vice president and investment advisors executive at Fifth Third Bank.

Marlon Styles Jr ’02, former executive director of curriculum and instruction for Lakota Local Schools, was chosen through unanimous vote by the Middletown Board of Education as Superintendent of Middletown City Schools in May 2017.

Jennifer Schack ’04, former WLWT-TV meteorologist, accepted a position with the Diocese of Covington. “I am … in a new role, titled New Media Correspondent. I work under The Messenger staff and focus on online digital content, as well as reporting for the weekly diocesan newspaper.”

Stacey (Ison) McMath ’05 writes, “Eli James McMath made his debut into the world on Jan. 10, 2017! Big sister Mackenzie was very excited and is doing an amazing job in her role as big sister. I can’t wait to see both of them as Thomas More Saints!” Congratulations Stacey and Ryan on the new addition.

Aaron Judd ’09 and April (Husak) ’15 Judd were married in Sept. 2016. Congratulations! On a professional note, Aaron took a position as Vice President of Finance for Alpha Delta Gamma National Fraternity in August 2016, and in May 2017, April graduated from Xavier University with a master’s degree in Human Resouces Development. 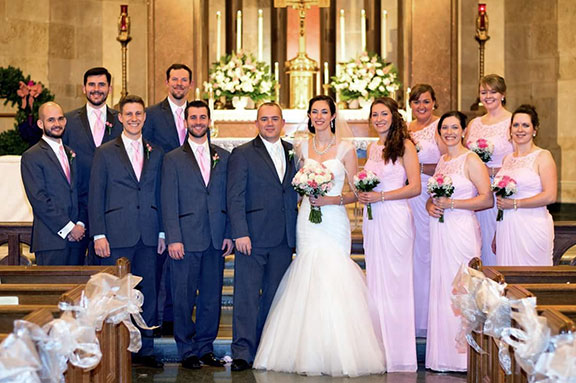 Emmy Kaiser ’11, the nation’s top-ranked wheelchair tennis player in women’s singles was one of four award-winners at the Northern Kentucky Sports Hall of Fame’s reunion meeting in June at the Villa Hills Civic Club. In addition to being No. 1 in the nation, Emmy was No. 11 in the world in women’s wheelchair singles on the International Tennis Foundation website. Her career records are 218-111 in singles and 107-93 in doubles, which includes matches at the 2012 Paralympic Games in London.

Brent ’12 and Ashley (Tucker) ’12 Jefferson welcomed a new addition to the family in 2016. Ashley had this to say: “Lyanna Mae Jefferson arrived at exactly 10 p.m. on Sept. 27, 2016, after 33 long, long hours of induced labor. She was a tiny little thing at only 5.1 lbs, but she’s gotten SO much bigger. Fast forward to now, and she’s a sweetheart. Total daddy’s girl, but definitely has her mama’s attitude! 🙂 :)”

James Schack ’12 and wife Mahala, are happy to announce the arrival of their first child in July 2017. James recently returned to the area to perform his family practice residency with St. Elizabeth Healthcare and was the featured speaker to the 2017 TMC Convocation Ceremony. He brought mama and baby on campus with him for the celebration. Congratulations to the Schacks!

Kyle ’15 and Katie (Hagedorn) ’16 Neltner, were married in June 2017 and are pictured here at the wedding reception with fellow TMC grads Dagan ’14 and Kelsey (Sparks) ’14 Kaht.

Ben Kleier ’16, as an employee of the the Cincinnati Art Museum, had artwork featured in an exhibition entitled Employed: A Staff Art Exhibition from Oct. 2016 – Feb. 2017. An independent juror selected more than 70 unique artworks, created by 37 working artists from the Cincinnati region who lead dual lives as artists and as museum professionals. Congratulations Ben! 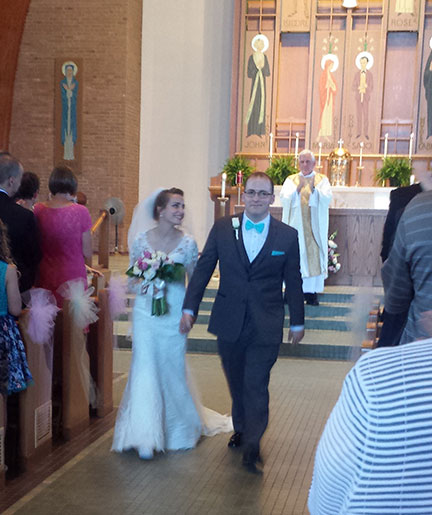 Craig ’16 and Kristin (Klocke) ’17 Schutsman, tied the knot in June 2017 at St. Joe’s in Cold Spring, Ky. Best wishes to the happy couple! Craig, Kristin, and Katie (Hagedorn) Neltner ’16 (above) are all students at University of Louisville Medical School.

← Excellent Educators – Who Was Your Favorite Professor
More Than Before: TMC Looks to its Future as a University →