For questions or to submit a story idea, contact Rebecca Stratton at 859-344-3309.
Browse: Home   /   Living Our Mission: Reflections on a Service Trip to Jamaica 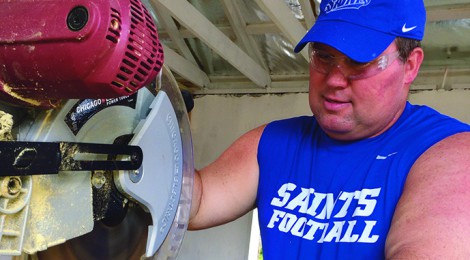 Living Our Mission: Reflections on a Service Trip to Jamaica 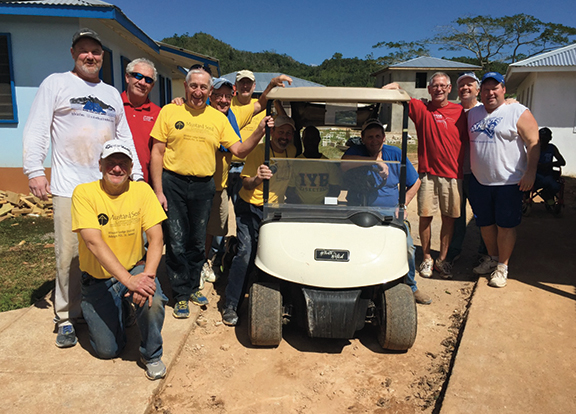 Group shot of the members who took part in this trip to Jamaica.

It’s not every day you find a college president in a mountain jungle far from civilization, wondering if he should have said no to a mission trip.

The first morning I woke up in Jamaica, I felt a burden of dread and uncertainty. I had just traveled thousands of miles to volunteer in a settlement that cares for the disabled. But what could I really do for the people here? Coming outside, I met Dan Hiltz ’71, a member of TMC’s Board of Trustees, and two local residents with Down syndrome, LeeChen and Michael. “Look, there’s Dave!” Dan told his companions. “He’s new! Go say hi!”

LeeChen and Michael ran up, smiling, and hugged me without hesitation. In an instant the anxiety lifted from my shoulders, and I felt at peace for the first time since landing in Kingston. Now I was ready to work.

Mustard Seed Communities, an international Catholic nonprofit, helps the most vulnerable populations in developing countries—the “orphans and widows” of James 1:27. Jacob’s Ladder, a Mustard Seed community in Saint Ann Parish, Jamaica, cares specifically for adults with disabilities. It’s the only haven of its kind in the country. While Jamaica may conjure beautiful resorts and sparkling blue water in the minds of tourists, it features unforgiving conditions for people with physical and mental handicaps, who often face abuse or abandonment, and receive no public support after they reach adulthood. Jacob’s Ladder boasts a resident population of 96, but a waiting list of over 500. Residents range from those with intellectual challenges to those whose limited physical capacities prevent them from leading the normal lives they long for in Jamaica.

The staff who run the community aren’t in this business for the money. They work twelve-hour shifts five to six days a week, earning scant compensation, fighting nuisances like bugs, heating water in shower bags for bathing. Their willingness to deny themselves for the sake of the needy embodies the spirit of Lent and demonstrates the practice of true servant-leadership.

My wife, Leslie, has worked in special education for almost twenty years. Her career gave me an immediate personal connection with the work happening at Jacob’s Ladder. But I have to confess that a mission trip attracted me because of the people I’ve met at TMC. I’m thinking of Dr. James Camp leading his Border Studies class to El Paso, Texas; Professor Tom Gilday taking students to Jamaica; Dr. Julie Luebbers conducting medical mission trips to Nicaragua and founding her nonprofit TEN FE to build a school in Guatemala; and Professor Richard Shuey chaperoning Habitat for Humanity trips during spring break. Over the past few years, these and countless other Saints have impressed me with the way they fulfill their obligation to others through charity and service learning. Until Jamaica, I had never gone on a mission trip, but as I entered my fourth year as president, I knew from these examples that the choice to leave my comfort zone would effect real change in the world and give me a life experience in common with many others in the local community. Bob Hoffer, Gerry Benzinger, and Jim Dressman ’74, from DBL Law Firm in Crestview Hills, had pushed me to go to Jamaica since I first came to Thomas More. Gerry and one of my group members, Mark Krahe, Sr., were indeed two of the men who first organized the mission and made it a northern Kentucky tradition. 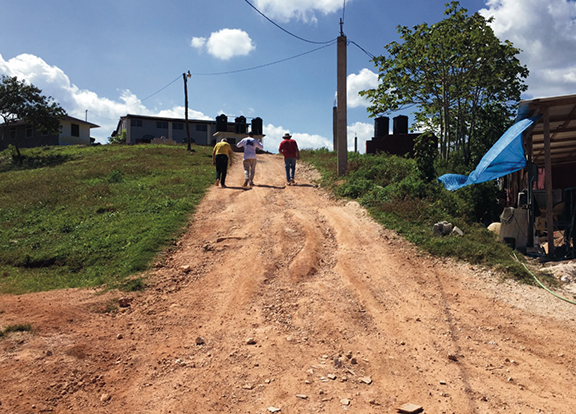 “The long orange mile” leading to and from the construction site.

In Jacob’s Ladder, our days began at 6:30 a.m. with breakfast and praying the rosary, then continued with Mass in a tiny chapel—a strange sight in Jamaica, where only about two percent of people are Catholic. It was moving to hear how joyfully the residents sang, how grateful they seemed despite their humbling situations. After Mass, we trudged down a steep hillside of reddish clay—“the long orange mile,” I came to call it—and arrived at a construction site where we could expect to be until dusk. It astounded me how much these fellows from northern Kentucky had accomplished. Their work included new facilities for housing, meetings, education, medical care, and worship. On this trip we were tasked with building four bathrooms from the ground up, then tiling them and installing a roof on one of the cottages. I hadn’t done any major construction work in about twenty years, but Tom Duggan, my crew leader, put me to work. Mustard Seed hopes eventually to build a hundred cottages in Jacob’s Ladder and make it an agricultural hub where residents learn the pride of ownership by cultivating crops and raising livestock. It was a privilege to contribute to that vision.

Several memories from the trip remain strong for me. In the evening our group would gather for faith formation and reflection with our chaplain, Fr. Bob Ross, and one night we went to a local establishment to enjoy Jamaican fare. In a short time we grew in our relationship with God and our camaraderie with each other. I’ll always cherish the experiences I had with my group members—our leader Guy Linnemann, Mark Krahe, Sr., Boone Riegler, Tom Duggan, Dan Hiltz, Tony Ruehl, Jay Schilling, Jay Broering, Jerry Lea, and Dan Heck, Sr.

I’ll remember all the fun we had, especially the time the mission guides and I played a 2-on-2 soccer game near the residents’ homes. Also, near the end of the trip, the residents and staff put on a talent show for us. I could sense God in the room that night; His presence was overwhelming. Jan Williamson, one of the nurses, sang like an angel. She is one of the best vocalists I have ever heard, and I hope to bring her to TMC one day so she can tour local churches.

One unforgettable experience happened early in the morning. I was walking around the camp when I saw a light pierce the trees on the mountain. I froze, reminded of the passage in Acts when Saul sees Christ on the road to Damascus. As the light dwindled, I felt suddenly shy, hoping God would reveal his wisdom to me in a new way. A short time later, Fr. Bob began his Mass by announcing it was the feast day of St. Paul—formerly Saul, who had forsaken his old life to follow Christ. It was one of the most spiritually profound moments of my life. I cried during most of the service, realizing God had wanted me there. I felt truly at home.

When I arrived back in the Atlanta airport, the first thing I did was call my mother. I told her how grateful I was for her and my father providing me a good life in a country of abundance. In Jamaica, the absence of daily comforts—a familiar bed, a favorite meal—awoke me to the circumstances facing the poor worldwide. It also renewed my awareness that our lives consist not in the things we have but in loving God through both gratitude and service. That truth, I believe, is one message we should take to heart every Easter.

When I began this article on March 12, the Gospel reading for that Sunday struck me as oddly appropriate for the mission trip: “Rise, and do not be afraid,” Jesus tells his disciples in Matthew 17:7 after the Transfiguration. A spirit free of fear is exactly what missionaries need to embrace God’s plans for them and the world. It makes me proud to know how many Thomas More Saints have committed their time and even their treasure to being fearless difference-makers like those I met in Jacob’s Ladder. In living out our mission statement, they are answering Jesus’s call in Luke 14:14 to help the neediest people, the ones who cannot repay you. They have inspired me to try to do the same.

← Challenges in Higher Ed 2017 – Education Through Online Delivery
What’s it Like to be a CORRE Intern? Let’s Find Out! →