CRESTVIEW HILLS, KY, June 5, 2013 — Thomas More College in Crestview Hills, Ky., announced today that it has raised $582,600 in honor of out-going President Sr. Margaret Stallmeyer, C.D.P.  Stallmeyer will retire as president effective June 30, 2013. She has served as president of the Catholic diocesan college since June 1, 2004.  During the last nine years, the College has grown in the scope and scale of its academic offerings, including the addition of 10 new baccalaureate programs.  In addition, enrollment has increased by 20 percent since Stallmeyer became president.  In her honor, the College established the Sr. Margaret Stallmeyer President’s Access Grant, which is permanently endowed and will fund future scholarships for deserving students. 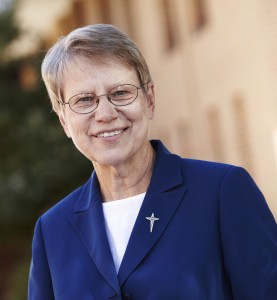 During a recent fundraising event, Stallmeyer explained the importance and value of this grant. “Having a named endowed scholarship is such an honor but, more importantly, it is a gift that will make a difference in the lives of young men and women for many years to come. I offer a heartfelt ‘thank you’ to everyone who has helped make this possible.”

Stallmeyer is succeeded by David A. Armstrong, J.D., who takes the helm July 1, 2013. Armstrong comes to Thomas More College from Notre Dame College in South Euclid, Ohio where he served as vice president and general counsel and played a vital role in the college’s development and enrollment departments.

Anyone interested in contributing to the Sr. Margaret Stallmeyer President’s Access Grant is encouraged to call the Office of Institutional Advancement at Thomas More College at 859-344-3344