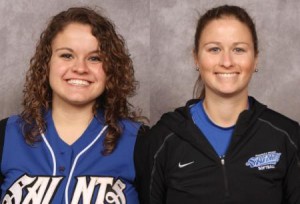 Junior third baseman Alex Walter (Lebanon, Ohio/Lebanon) was named the PAC Player of the Year and earned first team All-PAC honors.  She is the sixth Thomas More student-athlete to earn PAC Player of the Year honors during the 2012-13 academic year.  Walter has the Saints in batting this season as she is batting .470 with a .573 slugging percentage.  She is 55-for-117 at the plate with nine doubles, a home run, 23 runs batted-in and 25 runs scored, while being walked 22 times.

Head Coach Lindsay Bramhall was named the PAC Coach of the Year as she has guided the Saints to a 24-17 overall record and a 12-6 record in the PAC.  She is the fifth Thomas More head coach during the 2012-13 academic year to earn the Coach of the Year honor.  Thomas More won the PAC Championship Tournament last week for the fourth time in program history and third under Bramhall.  She is has the Saints in their fifth NCAA Division III Tournament in program history and third since she has taken over as head coach during the 2009 season.

Junior first baseman Stefaney Turner (Franklin, Ohio/Carlisle) and freshman Ana Walter (Lebanon, Ohio/Lebanon) were second team selections by the conference’s head coaches.  Turner batted .296 as she was 34-for-115 at the plate with six double, 15 RBI and 13 runs scored.  Walter batted .277 as she was 33-for-119 with five doubles, 17 RBI and 16 runs scored.

The Saints will open up NCAA Division III regional play on Thursday (May 9, 2013) when they play Capital University at 4 p.m. at the Angola, Indiana Regional hosted by Trine University.